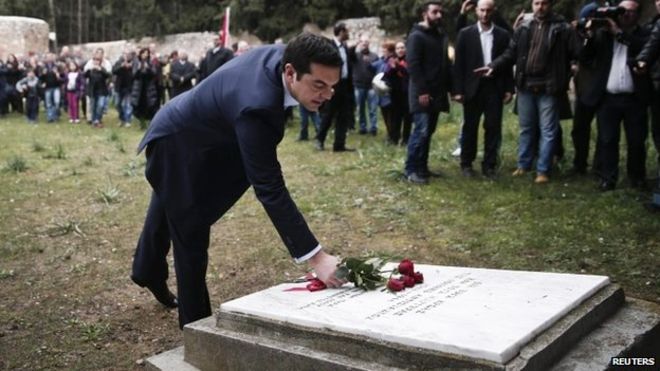 It is the first time Greece has officially calculated what Germany allegedly owes it for Nazi atrocities and looting during the 1940s.

However, the German government says the issue was resolved legally years ago.

The new figure given by Greek Deputy Finance Minister Dimitris Mardas includes €10.3bn for an occupation loan that the Nazis forced the Bank of Greece to pay.

“According to our calculations, the debt linked to German reparations is 278.7bn euros,” Mr Mardas told a parliamentary committee investigating responsibility for Greece’s debt crisis.

Mr Mardas said the reparations calculation had been made by Greece’s state general accounting office.

Berlin paid 115m Deutschmarks to Athens in 1960 in compensation – a fraction of the Greek demand. Greece says it did not cover payments for damaged infrastructure, war crimes and the return of the forced loan.

Germany insists the reparations issue was settled in 1990 legally and politically before Germany reunified.

Syriza politicians have frequently blamed Germany for the hardship suffered by Greeks under the tough bailout conditions imposed by international lenders.

Mr Tsipras is trying to renegotiate the €240bn EU-IMF bailout that saved Greece from bankruptcy. Greece has not received bailout funds since August last year, as the lenders are dissatisfied with the pace of Greek reforms.

A Greek repayment of €448m to the International Monetary Fund is due this Thursday.

Greek Finance Minister Yanis Varoufakis has said that Greece “intends to meet all obligations to all its creditors, ad infinitum”.