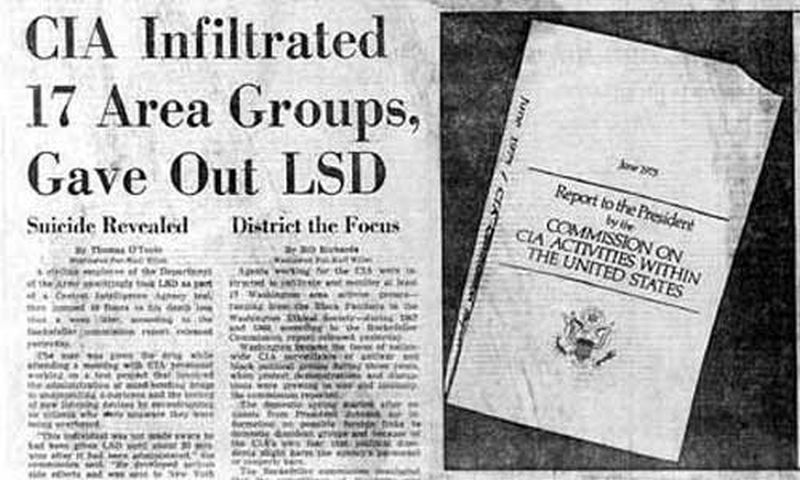 When the extent of the U.S. government’s domestic spying program was revealed this past summer, many were surprised and outraged: how could a government which so prizes liberty of its citizens covertly collect data on its own people?

Yet, sadly, this is not the first time Uncle Sam, without permission or notice, secretly gathered information on its people and wasn’t even close to the greatest atrocity. For that, there are numerous other examples such as when the government intentionally poisoned certain alcohol supplies they knew people would drink, killing over 10,000 American citizens and sickening many thousands others. (Despite this, the program continued for some time, though it was hotly debated in Congress when the death tolls started rolling in.)

One other such “interesting” program, was from 1953 to 1964, when the Central Intelligence Agency (CIA) conducted dozens of experiments on the effects of biological and chemical agents on American citizens without their knowledge in Project MKUltra. These covert tests included subjecting the unwitting subjects to hallucinogenic drugs and other chemicals, among other things.

It is difficult to find official documents about this program; however, in 1976 and 1977, the U.S. Senate conducted investigations and even held a joint committee hearing on Project MKUltra, then published much of what was discovered; you will not believe what they found out.

According to the hearing report, the project was intended to “develop a capability in the covert use of biological and chemical materials.”[1] The motivation was also defensive, in that many were afraid during the Cold War that the Russians and Chinese had already developed weapons in this area. As the project’s proponents noted:

The development of a comprehensive capability in this field of covert chemical and biological warfare gives us a thorough knowledge of the enemy’s theoretical potential, thus enabling us to defend ourselves against a foe who might not be as restrained in the use of these techniques as we are.[2]

Officially authorized in 1953, by 1955, project creep had expanded the CIA’s authority under MKUltra to include the following:

Discovery of the following materials and methods [including those]:

Senator Edward Kennedy dominated the hearing. In his opening remarks, he noted there was:

an “extensive testing and experimentation” program which included covert drug tests on unwitting citizens “at all social levels, high and low, native Americans and foreign.” Several of these tests involved the administration of LSD to “unwitting subjects in social situations.”[4]

For many of these drug tests, especially early on, there were “no medical personnel on hand either to administer the drugs or observe their effects.” Often, the randomly selected subjects had “become ill for hours or days, including hospitalization in at least one case.”[5]

Even more troubling, some of the tests proved lethal, but that did not stop the CIA from continuing their experimentation:

The deaths of two Americans can be attributed to these programs; other participants in the testing programs may still suffer from the residual effects. . . . The fact that they were continued for years after the danger of surreptitious administration of LSD to unwitting individuals was known, demonstrate fundamental disregard for the value of human life.[6]

One of these lives belonged to Dr. Frank Olson, himself a researcher with the U.S. Army who studied “developing techniques for offensive use of biological weapons . . . [and] biological research for the CIA.”[7]

Along with a group of 9 other such scientists, he attended a conference in a cabin at Deep Creek Lake, Maryland in November 1953. Once there, ironically, CIA operatives spiked the researchers’ Cointreau with LSD. Only after the scientists had finished their drinks were they informed that they had been drugged.[8]

Most of the researchers handled the experience well and had no aftereffects, but not Dr. Olson. He never recovered from the ordeal and shortly after the experiment, began to show “symptoms of paranoia and schizophrenia.”[9]

Dr. Olson’s superior and the CIA who ran the experiment arranged for him to get treatment in New York City. While spending the night in a hotel room with the CIA officer, and after requesting a wake-up call for the next morning, Dr. Olson somehow managed to fall to his death. As the CIA officer (Lashbrook) reported:

At approximately 2:30 a.m. Saturday, November 28, Lashbrook was awakened by a loud “crash of glass.” . . . . Olson “had crashed through the closed window blind and the closed window and he fell to his death from the window of our room on the 10thfloor.”[10]

There is no indication that any investigation of foul play, particularly by the CIA officer (who was both responsible for the experiment and alone in the hotel room with Olson) was ever conducted.

In the hearing, Senator Kennedy noted that many otherwise respectable institutions were fraudulently incorporated into MKUltra projects:

What we are basically talking about is . . . the perversion and corruption of many of our outstanding research centers in this country, with CIA funds, where some of our top researchers were unwittingly involved in research sponsored by the Agency in which they had no knowledge of the background or the support for[11]

According to the hearing report, “eighty-six universities or institutions were involved,”[12] and “185 non-government researchers and assistants” worked on these projects.[13] “Physicians, toxicologists, and other specialists in mental [and] narcotics” were lured into MKUltra through the provision of grants that were “made under ostensible research foundation auspices, thereby concealing the CIA’s interest from the specialist’s institution.”[14]

For some of the 12 hospitals that participated in Project MKUltra, tests were conducted on terminal cancer patients – presumably because the experiments were anticipated to have long-lasting detrimental, if not lethal, effects.[15]

Sadly, to get the hospitals (and perhaps the patients) to agree to these experiments, the CIA often paid the institution. For example, Subproject 23, authorized in August 1955, worked as follows:

The project engineer . . . authorized the contractor to pay the hospital’s expenses of certain persons suffering from incurable cancer for the privilege of studying the effects of these chemicals during their terminal illnesses.[16]

Likewise, many of the experiments conducted at the three prisons were done secretly: “We also know now that some unwitting testing took place on criminal sexual psychopaths.” [17]

Not all testing was done unwittingly, although that did not make it any more ethical. For example, in a prison experiment conducted by the National Institute of Mental Health Addiction Research Center at the Lexington Rehabilitation Center (a prison for convicted drug addicts), prisoners who volunteered to participate in a hallucinogenic drug experiment were promised (and received) doses of “the drug of their addiction.”[18]

An unknown number of other experiments in “such areas as effects of electro-shock, harassment techniques for offensive use . . [and] gas propelled sprays and aerosols” to be used as “assassination delivery systems” were also being conducted.[19]

In addition, MKUltra scientists were authorized to research “additional avenues to the control of human behavior” including “radiation . . .[and] paramilitary devices and materials.”[20]

Heinous Covert Experiments: By the Numbers

Project MKUltra consisted of 149 subprojects “many of which appear to have some connection with research into behavioral modification, drug acquisition and testing or administering drugs surreptitiously,”[21] including as follows:

The CIA Lost or Destroyed All Records of Project MKUltra

Sadly, but not surprisingly, almost no records remain of the 10 years of covert activity. As Senator Kennedy noted:

Perhaps most disturbing of all was the fact that the extent of experimentation on human subjects was unknown. The records of all these activities were destroyed in 1973, at the instruction of then CIA Director Richard Helms.[23]

Notably, however, some records were overlooked during the CIA’s destruction because new records were found in 1977, as noted by Senator Kennedy:

We believed that the record, incomplete as it was, was as complete as it was going to be. Then one individual, through a Freedom of Information request, accomplished what two U.S. Senate committees could not. He spurred the agency into finding additional records . . . . The records reveal a far more extensive series of experiments than had previously been thought.[24]

Nonetheless, these records still leave an incomplete record of the program.

Two lawsuits arising out of MKUltra activities made it to the Supreme Court, but both protected the government over citizen’s rights:

In 1985, the Court held in CIA vs. Simms that the names of the institutions and researchers who participated in Project MKUltra were exempt from revelation under the Freedom of Information Act due to the CIA’s need to protect its “intelligence sources.”

In 1987, in United States v. Stanley, the Court held that a serviceman who had volunteered for a chemical weapons experiment, but who was actually tested with LSD, was barred from bringing a claim under the Federal Tort Claims Act.