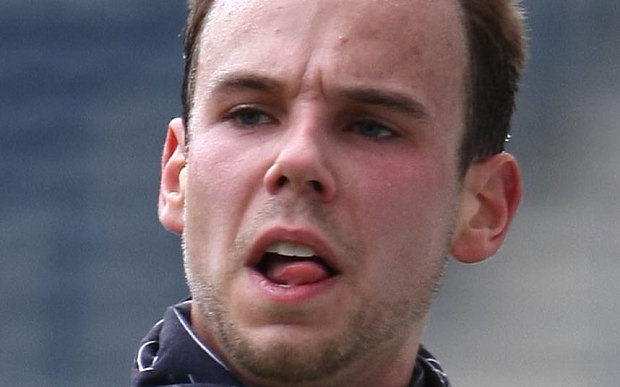 Andreas Lubitz, the co-pilot of the doomed Germanwings airliner

Ben Knight in Berlin, Luke Harding in Montabaur and Kim Willsher in Paris
The Guardian

Investigators looking into the background of Lubitz for clues as to why he may have wanted to take his own life – and to kill 149 other people – find torn-up sick note.

Bags and boxes and a computer are removed from the home of
Andreas Lubitz’s parents, and a man is escorted away

Investigators searching the Düsseldorf apartment of the co-pilot on the Germanwings flight that crashed into the French Alps on Tuesday have found evidence he hid an illness from his employers, prosecutors said on Friday.

The evidence is a torn-up doctors’ note, signing him off work on the day of the crash.

“Medical documents were found that indicate an ongoing illness and suitable medical treatment,” Düsseldorf prosecutors said in a statement.

“The circumstance that torn-up current medical certificates – also pertaining to the day of the act – were found, supports, after preliminary examination, the assumption that the deceased hid his illness from his employer and his professional circles.”

“Investigations as well as the assessment of the medical treatment documents will take some days. As soon as reliable findings emerge, we will inform relatives and the public.”

No suicide note or claim of responsibility has been found, the prosecutors said.

The investigation into the crash has turned to the background of the co-pilot, Andreas Lubitz, following the disclosure on Thursday he appears to have deliberately downed the plane in a rocky ravine.

Investigators are looking for clues as to why Lubitz, who was 27, may have wanted to take his own life – and to kill 149 other people as he did so.

On Thursday, Lufthansa’s chief executive, Carsten Spohr, revealed that Lubitz had interrupted his training in 2009, but refused to say why. He would only say that Lubitz was eventually cleared to return to work, after passing fitness and psychological tests.

On Friday however, the German newspaper Bild said that the Lufthansa flight school in Phoenix, Arizona had designated Lubitz at the time as “not suitable for flying”.

The newspaper said he spent a year-and-a-half receiving psychiatric treatment. Several times he was forced to repeat his flying classes because of depression, before he successfully finished his training. In 2009 he was diagnosed with a “severe depressive episode”, Bild reported.

He was given “special regular medical examination” by a doctor as well as the coding “SIC”. This coding also appeared on his pilot’s licence. 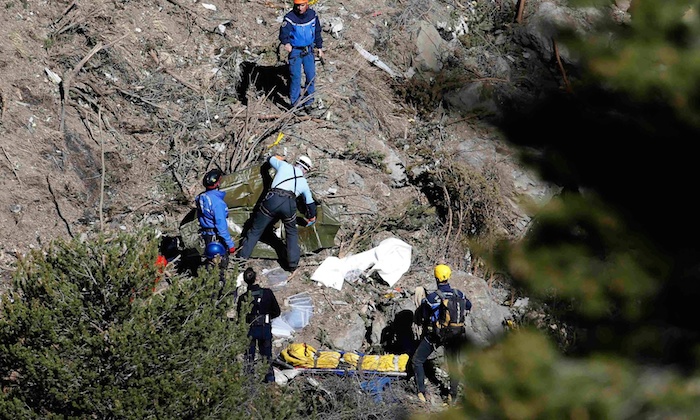 Citing police sources, Bild said the investigation is examining whether Lubitz had been suffering from a “personal life crisis”. He is said to have had a relationship crisis with his girlfriend and to have suffered emotional problems. The local Westerwälder newspaper said Lubitz and his girlfriend had been together for seven years and were living in a flat in Düsseldorf.

Lufthansa has yet to respond to the claims. Bild, Germany’s best-selling newspaper, is normally – though not always – a reliable source of news, and has an extensive network of sources.

On Thursday, prosecutors in France gave details of the final moments of flight 4U9525, travelling from Barcelona to Düsseldorf. For eight minutes, during which the cockpit voice recorder revealed Lubitz said nothing but was breathing normally, the 27-year-old ignored captain Patrick Sonderheimer hammering on the cockpit door and did not respond to increasingly urgent radio calls from air traffic controllers and nearby aircraft.

Emergency codes allow crew to enter an aircraft cockpit in the event of an incapacitated pilot, but the co-pilot is thought to have intentionally overridden the system, which is a post-9/11 security measure intended to prevent hijack.

“It could only have been deliberate,” said the French prosecutor Brice Robin, who gave the chilling account of the flight’s final 10 minutes. “He did this for a reason we do not know … but it can be seen as a willingness to destroy the aircraft.”

The only comfort that Robin could offer the grieving families of the 144 passengers on the aircraft was that they appear to have been unaware of their impending deaths until the last few seconds. They and the six crew members, including Lubitz, were killed instantly when the plane hit the ground and exploded.

It appears that Lubitz took advantage of being alone in the cockpit to initiate the dive that ended in the crash. In response, several air carriers said they would implement a “rule of two” to avoid a pilot being left alone on the flight deck.

Norwegian Air Shuttle was one of the first to announce the rule. “When one person leaves the cockpit, two people will now have to be there,” said Thomas Hesthammer, flight operations director for the budget operator. “We have been discussing this for a long time, but this development has accelerated things.”

Germany’s biggest airlines, including Lufthansa and Air Berlin said they would introduce the new rule, as did Canada’s biggest airlines, following the lead of Norwegian Air Shuttle. EasyJet was the first airline in the UK to announce it would implement it rule from Friday. “The safety and security of its passengers and crew is the airline’s highest priority,” an easyJet spokesperson said.

Airlines in Europe are not required to have two people in the cockpit at all times, unlike the standard US operating procedure, which was changed after the 9/11 attacks to require a flight attendant to take the spot of a briefly absent pilot.

Some experts said even two was not enough, and called for rules to require three.

“The flight deck is capable of accommodating three pilots and there shouldn’t ever be a situation where there is only one person in the cockpit,” said James Hall, a former chairman of the US National Transportation Safety Board, referring to the “jump seats” all airliners are equipped with.

Others questioned the wisdom of sealing off the cockpit at all. “The kneejerk reaction to the events of 9/11 with the ill-thought reinforced cockpit door has had catastrophic consequences,” said Philip Baum, London-based editor of the trade magazine Aviation Security International.