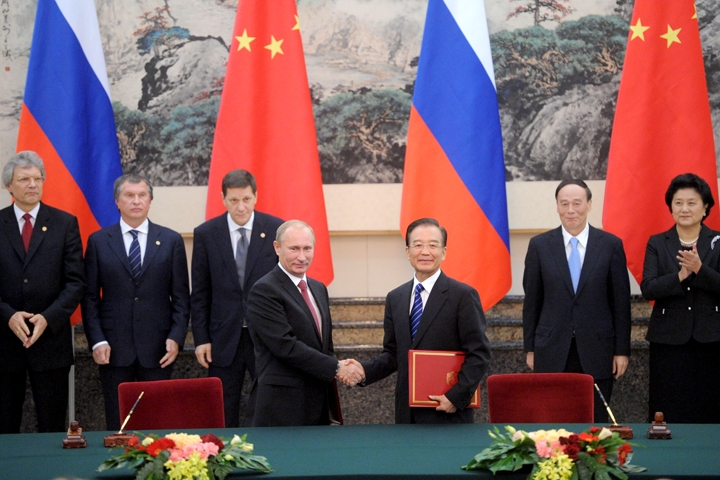 As we noted a week ago, Vladimir Putin’s calls for a Eurasian currency union clearly demonstrate that the Russian President is acutely aware of the fact that the unipolar world of the 1980s is long gone. Putin’s security council also made it clear this week that the Kremlin is well aware that the sole aim of US foreign policy is preserving Western hegemony via an implicit (and sometimes explicit) policy of containment aimed at perpetuating the idea of US exceptionalism. Moscow then took the rhetoric up a notch on Thursday, accusing the US of attempting to take the “mutual” out of “mutually assured destruction” (i.e. Moscow thinks Washington is trying to tip the nuclear power balance).

Given all of this, we weren’t surprised to learn that Putin is now backing a Russian bid for membership in China’s Asian Infrastructure Investment Bank (for a summary of AIIB developments, see here). Here’s more via RT:

“I would like to inform you about the decision to participate in the AIIB,” which was made by Russian President Vladimir Putin, Shuvalov said at the Boao Forum for Asia.

“We are delighted to be able to step up cooperation in the format of the Eurasian Economic Union (EEU) and China…the free movement of goods and capital within the EEU brings economies of Europe and Asia closer. This is intertwined with the Silk Road Economic Belt initiative, launched by the Chinese leadership,” he said.

This comes after yet another US ally threw its support behind the venture last week, as South Korea finally conceded that not joining really wasn’t an option if Seoul wanted to maintain its influence in the region. More color via Bloomberg:

South Korea “needs to play the active role it deserves in the international community that’s comparable to its economic status, and AIIB would be an important gateway to expand our financial and diplomatic arena,” the Sejong, South Korea-based ministry said Thursday. The country will officially become a founding member of the AIIB once other members agree, and when the national assembly approves, according to the e-mailed statement.

Asia’s fourth-largest economy joins key U.S. allies from the U.K. to Germany and France in supporting China’s bid to create a new institution funding infrastructure projects in Asia. Japan is yet to make a decision on membership after the U.S. expressed concerns about the fund’s governance structure.

And then there’s The Netherlands, an official bid from Australia, and Brazil…

Russia, Australia and the Netherlands on Saturday became the latest three countries to say they plan to join the China-led Asian Infrastructure Investment Bank (AIIB), adding clout to an institution seen as enhancing China’s regional and global influence.

The AIIB, seen as a challenge to existing institutions the World Bank and Asian Development Bank, has drawn a cool response from the United States, despite which European U.S. allies including Britain, France, Germany and Italy have already announced they would join the bank.

Other countries such as Turkey and South Korea have also said they would join. Brazil, China’s top trading partner, said on Friday it would sign up and that there were no conditions set. “Brazil is very interested in participating in this initiative,” the office of President Dilma Rousseff said in a statement.

To make a long story short, everyone but the US and Japan are on board and Japan is seriously considering a bid. The question now is not whether de-dollarization is progressing or whether a shift away from US-dominated multinational institutions is in the offing (that horse, as one ADB official put it, has left the barn), but rather whether China will be aggressive about using the AIIB to begin a push towards yuan hegemony. Of course Beijing is playing down the idea that it will use the new development bank as a means of advancing China’s global footprint, but as we noted on Thursday, actions speak louder than words.