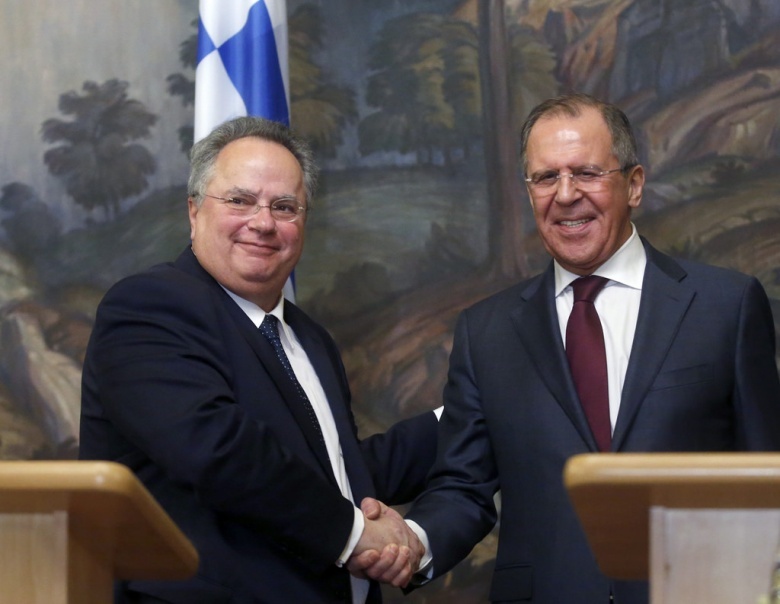 The ushering of Alexis Tsipras into the office of Prime Minister of the Hellenic Republic in late January 2015 represents a major change in Europe’s geopolitics. Tsipras and his left-wing Syriza party rode to power on a wave of acute voter dissatisfaction caused by the country’s severe economic downturn starting in 2009. Many Greeks believe this situation was rooted in austerity and reforms imposed by Brussels’ unelected bureaucrats taking orders from Berlin. There is now a new geopolitics of debt that encompasses relations within the European Union (EU), Europe’s relations with Russia and to a lesser extent, China. For the United States, the new geopolitical terrain only complicates an already complicated Eurasian political arena.

Greece’s new government is an alliance composed of the hard-left Syriza party (149 seats) and the strongly nationalist and populist Independent Greek party (thirteen seats). Syriza itself is a broad coalition of former communists, socialists, Greens and anarchists. It favors a large role of the state in the economy, increased social spending and keeping the euro. Greece’s two bailouts (2010 and 2012), worth €240 billion in loans, are a particular sore point, as they have left Greece with an ultimately unpayable debt burden.

The bailout was engineered under the auspices of the Troika, which is the EU, European Central Bank (ECB) and International Monetary Fund. The massive injection of loans kept Greece from defaulting on its debt and helped Greece remain in the Eurozone. It also helped stabilize acute financial-market turmoil that threatened to spread to Spain, Italy and France.

In return for the financial assistance, Athens agreed to implement structural reforms designed to make its economy more competitive. Greece’s fiscal picture did improve, but the cost has been brutal. The country has undergone an economic contraction by over 20 percent in the 2009-2014 period, unemployment has been in excess of 25 percent and youth unemployment sits above 50 percent, according to Eurostat.

The country’s debt has also climbed to more than €320 billion—around 175 percent of GDP—one of the highest levels in the world. Syriza’s reasoning is straightforward: cut the debt burden down to a more manageable level and get rid of austerity measures; the economy can return to growth.

The Tsipras government’s intention to end the current bailout program (which ends in February) has raised concerns that another crisis is looming. Without outside help, Greece is set to run out of money in the months ahead, possibly resulting in a default and an exit from the Eurozone. The threat of such an event has economic policy makers and international markets concerned. Even if a temporary deal is put in place, the problematic forecast for economic growth remains a major concern and will dominate the dialogue between Athens and Brussels (and Berlin).

While Greece is a victim of bad decisions on the part of its own past political leaders, there is considerable questioning of the correctness of the Troika’s economic medicine, in particular the austerity measures. Berlin’s well-articulated preference for living within one’s means has not gone over well with people hit by the lack of economic growth in not just Greece, but many other EU countries.

Europe’s economic-growth crisis coincides with Germany’s rise as the clearly dominant power in continental Europe. For his part, Tsipras wants to rewrite European geopolitics, tapping into a growing anti-austerity mood in other European countries, and undercut Berlin’s influence. Indeed, during his election campaign, the Greek leader accused German chancellor Angela Merkel of conducting a “social Holocaust.”

While it can be argued that Tsipras has the right message that Greece’s debt is too high, he is probably not the best messenger. He is a polarizer and enjoys confrontation. Staunchly left wing, he spoke out against Western sanctions on Russia shortly after Moscow’s annexation of Crimea, repeatedly called on Germany to pay billions of euros in war reparations, and in general, has little love for capitalism.

In its first weeks, the Syriza-led government aggressively signaled Greece’s new policy direction. One of Tsipras’ first acts as prime minister was to visit a site where the Nazis executed Greek partisans, followed by a very cordial meeting with the Russian ambassador. He and his finance minister, Yanis Varoufakis, quickly declared that they would no longer work with the Troika, demanded debt reduction, took measures to roll back austerity and froze the privatization program.

Varoufakis took to the air with an early February tour to other European capitals seeking support for debt forgiveness and bridge financing. Although Athens sought to convert its debt problem into a broader European debate on economic policies, Varoufakis came back with little to show. His meeting with German finance minister Wolfgang Schauble on February 8 can only be described as frosty, with the Greek finance minister observing: “We didn’t even agree to disagree.”

Following Varoufakis’ meeting at the ECB with Mario Draghi, the central bank suspended standard funding for Greek banks by cancelling its acceptance of Greek bonds as collateral, shifting the burden of funding banks through emergency liquidity assistance from Greece’s central bank.

While Tsipras and Varoufakis were seeking to charm other European leaders, Greece’s new foreign minister, Nikos Kotzias, was active. A former political-science professor and author of Greece Colony of Debt: European Empire and German Primacy, Kotzias in his first week briefly held up the discussion on extending EU sanctions against Russia, because Athens was not properly informed and was opposed to proposals for new sanctions.

Kotzias followed this with a trip to Moscow, where he met with his Russian counterpart, Sergey Lavrov. The two foreign ministers emphasized their intention to revive and accelerate bilateral relations in all areas, with Kotzias stating: “Greece and Russia share an old, historic and cultural friendship and we seek to expand creatively this relation in the 21st century.”

Kotzias also noted that he had already called on his counterparts in the EU “to stop ‘the continuous talk on Ukraine’ and draw up a positive agenda with prospects for the entire Europe and specific proposals toward Russia, hoping that soon there will be stabilization and peace in the region.”

For his part, Lavrov claimed that “[the Russians] honour the constructive stance adopted by Greece which is in favour of a strategic Russia-EU cooperation,” which “will not be sacrificed to certain geopolitical ambitions of third countries.” The Russian foreign minister also clearly indicated that any request on behalf of the Greek government for loans will be considered. For Greece, Russia provides leverage (albeit limited leverage) vis-à-vis Germany and the rest of Europe. Simply stated, Moscow cannot replace what the EU provides Athens.

Greece’s geopolitics of debt also sought to encompass the United States and China. Although suggested as a possible part of a “Plan B” of alternative funding by Greek defense minister Panos Kammenos, Washington’s national interests are not substantial in Greece. Indeed, Athens’ pro-Russian stance, something pursued by past Greek governments during the Cold War, complicates U.S. diplomacy with regard to Ukraine and Russia. In terms of realpolitik, the role of bailing out Greece would most likely offer little gain, but runs the risk of injecting new friction into U.S.-German relations.

And then there is China. Greece’s deputy foreign minister Nikos Chountis mentioned proposals for economic support and investment possibilities from China. Although China indicated surprise at this, the Asian country’s Cosco Group was short-listed last year (by the previous government) as a potential buyer of a 67-percent stake in Piraeus Port Authority, a privatization potentially worth €800 million. The privatization was initially canceled by the Syriza government, but that decision was soon reversed in the face of dwindling cash and growing prospects for default.

While China may share a broad ideological affinity with Syriza and finds a majority ownership of a key Southern European port attractive, a risk is that Greece ends up like Venezuela, long on socialist rhetoric and grossly mismanaged economically. China has an estimated $4 trillion in foreign exchange reserves, but there are limits to its generosity. For the Chinese, Greece runs the risk of becoming Europe’s Venezuela, but without the benefits of oil.

Even if the Syriza government gains some type of debt relief from the EU (which is a likelihood), the geopolitical landscape has changed. Syriza’s anti-austerity message and frequent jabs at German dominance have hit a responsive chord elsewhere in Europe. Opposition parties like Spain’s Podemos and Ireland’s Sinn Fein have picked up the message and could make gains in elections later in the year.

At the same time, Greece’s change in debt policy, in particular the rolling back of reforms, has rallied other EU governments against it, including those in Spain, Portugal, Finland and the Baltic States. Additionally, Greece’s pro-Russian stance has created ill will with Poland and Romania, countries that have dark histories with Russia.

Historian Brendan Simms ends his Europe: The Struggle for Supremacy with the hope that the European Union will become a “more cohesive international actor.” The active foreign policy of the Syriza government is a step away from Europe becoming a more cohesive actor. It underscores the dilemma facing the EU: can a more coherent political union be created without eroding the democratic rights of the citizens?

Under the current structure, European policy often reflects German influence, albeit forged by a consensus. In this, Greece is right to point out the lopsided nature of EU policy deliberations, especially when they overrides the democratically expressed wishes of a country’s citizens. Its approach, however, is abrasive and ultimately divisive.

The battle over Greece’s debt points to the problematic nature of the EU’s political structure. In the early 21st century, it increasingly looks like the Holy Roman Empire, which lasted roughly from the 9th century to 1806. In its late period, the Holy Roman Empire was a ramshackle affair, marked by a weak political center, a loosely held coalition of states stretching across much of Europe and a battleground for outside powers. Greece’s new geopolitical direction will not by itself dismantle the EU, but it is a force pulling against the political center.

Voltaire is credited with stating, “The Holy Roman Empire was neither holy, nor Roman, nor an empire.” What Greece debt politics are amply demonstrating is that while the EU is “European,” it is struggling to be a union.