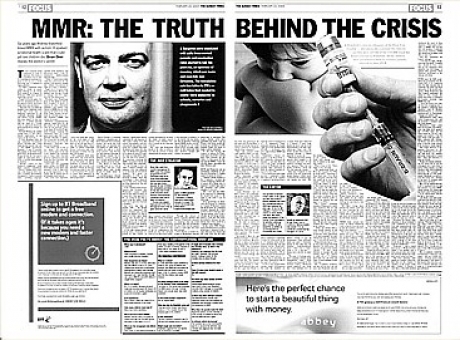 Dr. Andrew Wakefield’s paper on the Autism- MMR vaccine connection as it appeared in The Lancet

In a stunning reversal, world renowned pediatric gastroenterologist Prof. John Walker-Smith won his appeal against the United Kingdom’s General Medical Council regulatory board that had ruled against both him and Andrew Wakefield for their roles in the 1998 Lancet MMR paper, which raised questions about a link to autism. The complete victory means that Walker-Smith has been returned to the status of a fully licensed physician in the UK, although he had already retired in 2001 — six years before the GMC trial even began.

Justice John Mitting ruled on the appeal by Walker-Smith, saying that the GMC “panel’s determination cannot stand. I therefore quash it.” He said that its conclusions were based on “inadequate and superficial reasoning and, in a number of instances, a wrong conclusion.” The verdict restores Walker-Smith’s name to the medical register and his reputation to the medical community. This conclusion is not surprising, as the GMC trial had no actual complainants, no harm came to the children who were studied, and parents supported Walker-Smith and Wakefield through the trial, reporting that their children had medically benefited from the treatment they received at the Royal Free Hospital.

While John Walker-Smith received funding to appeal the GMC decision from his insurance carrier, his co-author Andrew Wakefield did not — and was therefore unable to mount an appeal in the high court. This year, however, Dr. Wakefield, who now conducts his research in the US, has filed a defamation lawsuit against Brian Deer, Fiona Godlee and the British Medical Journal for falsely accusing him of “fraud.” The suit is currently underway in Texas, where Wakefield now lives. The ruling today bodes well for Dr. Wakefield’s suit against Deer, on whose reporting the entire GMC hearing was based.

In 1998 the Lancet published a case series on twelve children receiving treatment for bowel dysfunction at the Royal Free Hospital in London. The paper called for further study of a possible association between bowel disease and developmental delay, including cases of autism. It also noted that eight of the children’s gastrointestinal and autistic symptoms began shortly after they received the MMR vaccination. The verdict today raises questions about whether or not the Lancet should have retracted the paper after the GMC decision, as the reasons for its retraction have now been contradicted by the judge’s decision.

The thirteen original co-authors of the 1998 Lancet case series were members of the Royal Free’s Inflammatory Bowel Disease Study Group. In 2004, under pressure from the British medical establishment, ten of the co-authors signed a letter retracting an interpretation of the paper that it proved that vaccines caused autism, which the paper never actually claimed in the first place. John Walker-Smith, Andrew Wakefield and Dr. Simon Murch were subsequently brought up on misconduct charges before the GMC. The proceedings resulted in Walker-Smith and Wakefield being found guilty and being “struck off” the medical register, while Dr. Murch retained his status as a physician. Wakefield was then vilified by corporate media and by bloggers eager to repeat scandal and engage in industry protectionism, rather than investigate the complicated facts of the story.

Today, almost 14 years after the paper was published, the high court determined that John Walker-Smith was innocent of the wrongdoing alleged by the GMC. Judge Mitting reported that the GMC, “on the basis of sensible instructions, does not invite me to remit it to a fresh Fitness to Practice panel for redetermination. The end result is that the finding of serious professional misconduct and the sanction of erasure are both quashed.”

British parents from the group CryShame, which includes parents of the Lancet 12, issued a statement saying that they “welcome with immense relief the end of the eight year ordeal of Prof John Walker-Smith and the quashing of all substantive charges against him in the High Court, and wish him their heartfelt congratulations at finally clearing his name.”

“Though justice has finally prevailed for Prof. Walker-Smith, the damage done to him and his colleagues has been incalculable,” said Mark Blaxill, chairman of the Canary Party. “The UK government must investigate the corruption in the GMC, which has severely damaged the reputations of good, honest doctors. Most of all, it’s outrageous that Dr. Andrew Wakefield has been vilified by government officials, vaccine manufacturers and physician organizations, and that the media has accepted these unfounded accusations uncritically.”

“It’s time that we started treating responsible parents as reliable witnesses to serious adverse reactions to medical procedures such as vaccination,” said Jennifer Larson, president of the Canary Party. “The work that Walker-Smith and his colleagues at the Royal Free Hospital did with the Lancet 12 was medically necessary and above reproach. No patient complained, and the charges against the Royal Free team came only from a freelance journalist writing for a Rupert Murdoch newspaper. Meanwhile, the findings reported in the Lancet paper have been replicated in numerous scientific publications and reported by thousands of parents all over the world.”

“It is quite obvious to me that James Murdoch, Brian Deer and GlaxoSmithKline orchestrated the smear attack on Dr. Andrew Wakefield,” said Ginger Taylor, executive director of the Canary Party. “A judge has now ruled that the GMC hearings were a farce. Parents are waiting for journalists to find their spine and start some honest reporting on the character assassination of doctors that is blocking medical treatments for vaccine injured children, and the role that GSK and Merck may be playing to protect their profits on the MMR vaccine. The Canary Party honors and stands by doctors of integrity like Prof. Walker-Smith, who continue to fight and defend their hard-won reputations for going the extra mile to investigate and improve the chronic, difficult-to-treat cases that now permeate our society.”