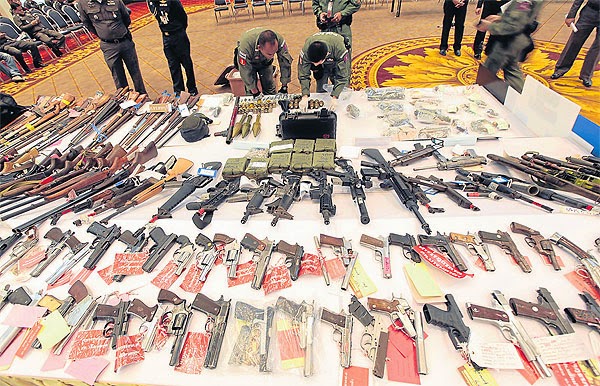 A weapons catch seized by the Thai army from Shinawatra’s armed networks in the wake of the 2014 coup.

Dozens of anti-coup activists held a demonstration in central Bangkok today, handing out roses and copies of George Orwell’s “1984” — a rare expression of public dissent in a nation still under strict martial law.

Except in reality, these “dozens” of “activists” are merely the same loud, obnoxious minority that has ceaselessly opposed attempts by Thailand’s institutions, including the military, to restore order, peace, and stability after over a decade of turmoil created by mass murderer and dictator, Thaksin Shinawatra.

Street Mob Wants Thaksin Shinawatra, not “Democracy”
Shinawatra mass murdered nearly 3,000 people in a 90 day period in 2003. He ordered a protest put down in 2004 that saw 85 killed in a single day (after they were detained). He would oversee the assassination or disappearance of 18 human rights advocates during his first of two terms in office, and since being deposed in 2006 by a military coup similar to the one that ousted his nepotist sister, Yingluck Shinawatra just last year, he has built-up and deployed “red shirt” street mobs that have hacked to death, shot, beaten, and otherwise murdered, abused, or intimidated Shinawatra’s political opponents across the country .

During unprecedentedly large protests demanding Shinawatra’s sister step down from power, he would once again deploy these militants in the streets, killing nearly 30 men, women, and children, and maiming many more in a vain attempt to help his sister cling to power.

All of these serial atrocities committed against the Thai people has been accomplished with the impunity granted by Western-backed “elections” that have seen Shinawatra’s well-oiled political machine easily return favorable poll results no matter how egregious his crimes have been. His ability to wield violent street mobs and heavily armed militants and assassins against his opponents – including the courts that would have otherwise long-ago removed him from power judicially – have further afforded him utter impunity.

With the police under Shinawatra’s control and the courts immobilized by threats and an inability to have their rulings enforced, the Thai military was left no other choice but to remove Shianwatra, his regime, and his vast US-backed political and non-governmental networks from Thailand’s political landscape via a peaceful coup. Clearly what Thailand has been under over the past decade has not been “democracy,” but rather despotism poorly dressed as “democracy.”

Thus, AFP’s “activists” are merely Shinawatra supporters, incapable of demanding the “return of democracy” since there was no democracy to begin with. Indeed, the “activists” instead seek to return to the mass murder, carnage, corruption, intimidation, and ruination of Thailand under the Shinawatra regime. Many of these “activists” emanate from Thailand’s increasingly compromised Thammasat University, encouraged by overtly US-funded faculty with direct connections to the Shinawatra regime and the many foreign interests that have helped create, install into power, and defend it against any attempts to restrain it from consolidating absolute political power within the Southeast Asian country.

The US and its media monopolies attempt to frame small mobs composed of the same people as “pro-democracy” when clearly they are anything but. Such dishonest at the expense of not only the truth, but of peace and stability in Thailand illustrates precisely why a military coup was necessary to remove such criminals from power, and why martial law will remain necessary well into the foreseeable future until these networks have been fully uprooted and a real political process can be put in place.