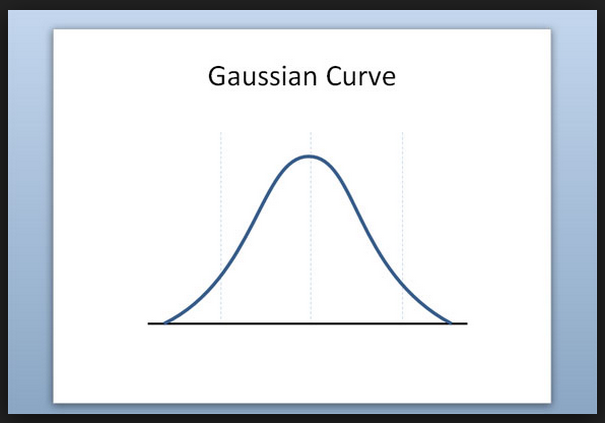 By Guy Haselmann of ScotiaBank

Bell Curves have become fatter and flatter. They may even be inverted. The term “bell curve” comes from the shape of the curve that depicts all occurrences distributed around the most-probable event. Data points in the ‘tails’ are now more frequent. Hyper-active central banks might be ensuring both a melt-up bubble and a market crash: larger ‘right-tail’ and ‘left-tail’ outcomes.

Many of the central banks’ actions have been motivated by their price-stability mandate. Due to the perception that they are failing on this mandate, several have resorted to extreme policy experimentation. However, mechanically responding to drops in inflation gauges can have dangerous long-run effects, especially if central banks are miscalculating inflation and underestimating the consequences of radical policy.

In this light, central bank success has to be a function of their accurate understanding of pricing pressures. This could be where central banks’ lurch into experimental policies breaks down. Stable and declining inflation has largely been the result of growing innovation, modernization, globalization, and productivity. Central banks could be fighting the wrong kind of price pressures and their tools may actually fuel, rather than counteract, those factors (due to how the proceeds of debt issuance are used).

Furthermore, recent drops in inflation indices have been the result of falling commodity prices which are typically only ‘transitory’ (as Yellen stated). They are ‘transitory’ because year-over-year numbers will add back to inflation 12 months after prices stabilize. By worrying consumers so publically about their concerns over deflation, central banks are doing exactly what they say they are trying to prevent: embedding a deflationary psyche into the behavior of consumers. It is feasible that central banks will take credit for next year’s rise in inflation in an attempt to re-establish credibility after prior year failures.

Extreme policies – that have diminishing benefits over time – may have now become counter-productive as consumers are coerced into worrying about these over-hyped developments. Therefore, global central banks may have embraced an inappropriate amount of fear mongering about deflation. Moreover, low or negative rate policies also encourage higher debt. Both issues have consequences that will have to be dealt with over time.

Negative interest rate policies in many countries show the drastic extent of just how far central banks are willing to go. Many people are perplexed that interest rates can go negative. It is hard to imagine that someone will pay to lend money. During the gold standard when the US dollar and gold were fully-convertible, those who preferred to hold gold received a negative interest rate due to storage costs. The same concept must now be applied to fiat money, where some are willing to pay to have their money stored.

In addition, some (non-mandated) investors will invest at negative yields if they expect deflation to give them a positive real yield. Currency levels are also having an impact on central bank actions. Some central banks might be cutting rates so their currencies do not strengthen against others who are cutting rates. It is for this reason that most central banks were forced to cut so low in the first place. In other words, when the Fed cut to zero, others had to follow suit or risk being left behind from ‘too strong’ a currency.

Policy makers have entered a treacherous environment where the value of the currency has become a weapon (currency wars). The fact is that in a highly interconnected and globalized world, central banks’ independence is limited. When one central bank moves, it puts pressure on some others to move.

There have already been seventeen central bank cuts so far in 2015. A few European central banks might be trying to pre-empt March’s ECB QE. The Danish central bank has cut rates 4 times in the past three weeks. Yesterday, the Swedish Riksbank dropped their deposit and repo rates below zero. In turn, the Swedish Kroner has now become a key funding currency for renewed risk-seeking carry trades.

QE and negative interest rate policies incentivize investors to chase (ever) lower-yielding and higher-risk assets. Asset price inflation is the purposeful intent.However, the risk/reward profile changes as prices rise. This is not a problem until:

In the meantime, investors’ not incentivized or forced to participate will simply hoard cash. Pillow case deposits look better than bank deposits. Moreover, the opportunity cost of holding cash is exceptionally low due to negative or low rates and modest inflation. Cash can also be deployed opportunistically, so it has high levels of optionality. However, cash holders will be subjected to FOMU risk (Fear of Missing the Upside).

Should the public begin to hoard cash, it is difficult to envision how a central bank can achieve its mandate. Would that mean that the central bank will have to print ever-larger amounts of money merely to offset the hoarding?

It is unlikely that the Fed would ever push rates negative due to the importance of the Money Market Mutual Fund industry in this country. In the unlikely event that it happens, gold would begin to shine. On the contrary, I expect the Fed to hike rates soon (no later than the April meeting). This can help end the madness of other central banks’ ‘race to the bottom’. As the holder of the world’s reserve currency, the Fed needs to be the first major central bank to hike.

The recent ‘risk-on’ euphoria should encourage an earlier hike from the FOMC. With so many easing moves recently and the launch of the ECB QE in March, the Fed might feel those actions will help reduce the potential of a negative market reaction. After 6 years of enormous accommodation, the Fed has been worried about disrupting the apple cart of ever-higher asset prices. Hiking rates while other central banks are easing can be a form of “Great Aunt Addy Policy”, i.e., using the brake and accelerator simultaneously (August 4, 2014 note).

The timing for a hike is quite good. GDP has accelerated, inflation has been stable, payrolls have improved and the unemployment rate is down to 5.7%. Equity markets are near all-time highs (bubblish?), credit spreads are tight, market interest rates are low, and oil is giving the consumer a boost.

The upward pressure on the US dollar from a hike would have some modest negative effects on the profitability of large multi-national corporations, but there would be worthwhile and offsetting benefits to Europe who is trying to depreciate its currency.

Another reason for the Fed to hike is that the US Treasury curve has bear steepened in the last two weeks. Many believe that the Fed likes a steep curve because that is supportive to banking NIMs, but the current environment is different. Today, the Fed is more concerned about maintaining support to the housing industry. Therefore, the Fed would like to see front rates rise, but back end rates stay low. The best way to achieve this result would be to hike sooner than the market is expecting.

Lastly, the Fed’s 2012 Operation Twist extended the maturities of their SOMA holdings. The first of these mature in early 2016. The Fed will have to hike rakes well in advance of the $200 billion in securities that mature in 2016. An April hike would give them greater flexibility to space out further rate hikes in 2015.

On a separate issue, the biggest wild card for the Fed and the US economy is how the west coast dock workers lock-out plays out. 29 Ports from Seattle to San Diego are currently shut down for four days. The ports handle over $1 trillion of goods annually. The Pacific Maritime Association who operate the ports took punitive actions to shut the ports in retaliation for the dockworkers who in recent days had slowed their efforts – essential getting paid for not really doing their job.

While 20,000 workers are directly impacted, it is estimated that over 30 million workers are indirectly affected. These ports are critically important to the US economy and will cost billions each day that they are closed. It appears that they will re-open on Tuesday, but it is unclear how cooperative the workers will be until the wage dispute issue is resolved.

Some have already called for Obama to invoke his authority under the Taft-Hartley Act to force the ports to stay open, but his ideology is such that he will not want to look like he is siding with the employer at the expense of a union or employee. A prolonged port problem could push the US into a short recession. It is far too early to worry about it and it is unlikely to be a prolonged problem, but its critical importance deserves attention.

The situation in Greece is significant and far from being resolved. The Germans tell me that they do not even know what Greece wants because their demands are so incoherent. The interest rate paid on existing debt is at rock bottom levels (0% with the ECB) so that isn’t the issue. Debt forgiveness is not an option. New money will not be granted, simply because Greece is viewed as a Kleptocracy. Austerity relief will be difficult to concede since Tsipras would do the opposite by hiring back unproductive public workers and re-instituting pension benefits. All outcomes and solutions discussed so far look problematic. I believe there is a 50/50 probability between an agreement that allows the EU to muddle along a while longer (possibly the preferred outcome for all involved), and a market-disruptive Greek exit (and default).