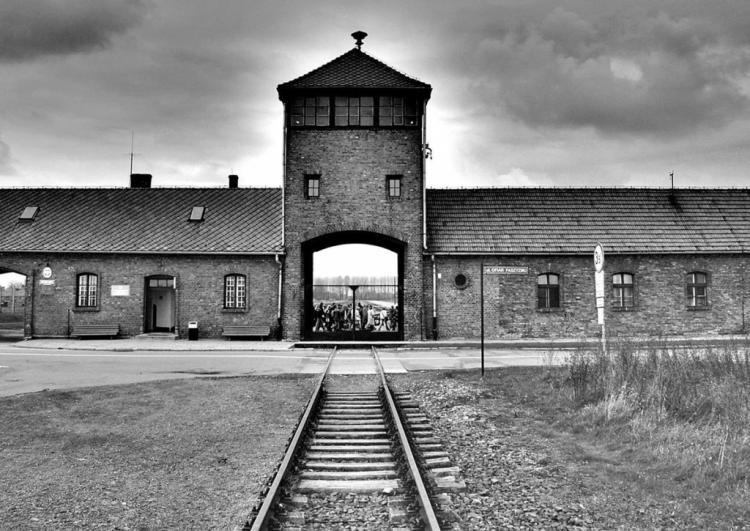 In a new YouTube video entitled ‘Auschwitz – Media lies or the truth at last?’ (below) produced by Lady Michelle Renouf, Frau Ursula Haverbeck,  speaking publicly at a conference in the German State of Saxony-Anhalt, has declared a victory for Germans in “dispensing with Auschwitz as the ‘scene of the crime’ of the holocaust.”  She said “According to official statements, Auschwitz is no longer considered the scene of the most wicked crime in history – the alleged murder of six million Jews. So the question arises: where did this crime take place? Where is the scene of the German’s crime? This is the burning question of the six million. Where are they?”

“Over a period of five years”,  says Frau Haverbeck, “I have challenged in writing, various German authorities, including judges, the chamber of lawyers, German-Jewish organizations  and the ministers of the various German states, to ‘define the scene of the crime’.  If not at Auschwitz, then where did it happen?” The ‘authorities, she contends, must demonstrate where it happened, and she feels that they have had more than ample time, but have not done so.  Which begs the question: “why not?”. Frau Haverbeck says “they have failed to reply, because they have no answer! And if they have no answer, then I must conclude that there is no evidence to substantiate the official narrative concerning the murder of six million Jews!”

“We can now dismiss Auschwitz!” concludes Frau Haverbeck. “And I say this publicly here in the state of Saxony-Anhalt.  Seventy years after the war, it is high time that we [Germans] accept our rights, as publicly proclaimed by European leaders, that we have Freedom of the Press, Freedom of Opinion, and the Freedom to Demonstrate. These freedoms, according to those leaders, are the most sacred rights enjoyed by citizens in a democracy. I, therefore, claim them for myself. Thank you!”

Frau Haverbeck has organized a public conference to take place on January 31st, 2015, in Saxony-Anhalt on the topic of “The Liberation of Auschwitz” and has invited the Minister of the Interior to attend.  As we previously reported, in December of 2014, Frau Haverbeck laid criminal charges against the Central Council of Jews in Germany for False Prosecutions.

In the introduction to this video, Richard Edmonds also challenged Russian President Vladimir Putin to re-investigate the lies of the Soviet Commission in 1945, which formed the basis of the deceitful postwar histories of both the Katyn Massacre and the Auschwitz camp.

We have, in numerous previous posts, also challenged Mr. Putin to open all of the former Soviet war archives and to officially come clean about the lies concerning World War II, particularly relating to the alleged “unprovoked attack by Hitler on the Soviet Union” which is demonstrably false, according to many notable historians, including several Russians, as well as, documents in the German archives and in the private archives of Marshall Mannerheim of Finland.  But also, regarding the heinous crimes committed against Germans in the final months of the war, as well is in the aftermath, including the forged evidence presented at the Nuremberg trials, and the use of torture to induce confessions.

This video was published January 24th, 2015 with English subs:

Where are the photos that were taken by the Soviets during the liberation of the Auschwitz concentration camp?

The Soviet Army reached Auschwitz on 27th January 1945. On that day many pictures were taken of those approximately 7,500 inmates who

were left behind. These photographs, however, are almost never shown to the general public; the relatively well-fed people do not fit so well into the popular image of “extermination camp” Auschwitz.

One also wonders why the Soviets did not take a single photo of that gas chamber, which through decades has been presented to millions of tourists as the place where millions of Jews had been gassed.

Instead, Pravda reported six days after the liberation of Auschwitz of mass killings on electric conveyors and cremations in blast furnaces (see footnote 3) but said not a word about Zyklon B, the main weapon of the alleged Holocaust.

“Step by step I am more and more of the conviction that the aims of Communism in Europe are sinister. I indicted the Nazis at Nuremberg. Together with my Russian colleagues I condemned Nazi aggression and the Nazi terror. (But) Hitler and the German people did not want war! Following our policy of balance of power and inspired by “Americans” [31] around Roosevelt, we declared war on Germany in order to destroy it. We have not responded to the numerous pleas of Hitler for peace. Now we have to realize that Hitler was right. Instead of a cooperative Germany, which he had offered us, stands the huge imperialist power of the Soviets. I feel ashamed and humiliated to have to see how the same goals, which we assumed Hitler had, are being pursued under a different name, and the same tactic is being used without restrain.”[32]

As Prof. Robert Faurisson has previously pointed out “The Nuremberg judges never visited Auschwitz. And they even never asked for a forensic report. They took judicial notice of Soviet document USSR-008 stating that 4,000,000 died at Auschwitz camp. In 1995, it was decided by the camp’s authorities that1,500.000 was the real figure. Later on, a plaque in the camp indicated 1,300.000. [And since lowered again]. He adds:

The beginning of Article 19 of the Charter of the International Military Tribunal (IMT) states:“The Tribunal shall not be bound by technical rules of evidence …”

The beginning of Article 21 says : “The Tribunal shall not require proof of facts of common knowledge but shall take judicial notice thereof …”

The real organizer, responsible for the IMT, was Robert H. Jackson, US Attorney General, who said on 26 July 1946: “This Tribunal represents a continuation of the war efforts of the Allied Nations” (IMT, vol. XIX, p. 398).

At the IMT it was forbidden to dispute the content of documents such as USSR-008; one had to take judicial notice thereof.”

In the Federal Republic of Germany, “holocaust denial” is illegal and the courts there have always maintained that the “holocaust” is a “fact of common knowledge”, that it is “obvious” and cannot be called into question, under pain of fines and lengthy terms of imprisonment. To present contrary evidence in ones own defence is also illegal. Well, “obviously” such a law, combined with the silence and complicity of German leaders in enforcing such a law proves a continuation of the Allied Nuremberg process, and that Germany is still under occupation, with no independent government or judiciary.  It is, undeniably, “a continuation of the war efforts of the Allied nations”.  Not a single one of the Allied nations which declared war against the German Reich has ever offered a peace treaty. Nor for that matter has “Judea” which declared war on Germany on March 24th, 1933.

We Germans are still awaiting our “liberation”. The truth shall set us free, and that can be the ONLY reason for criminalizing it!

Many thanks to Frau Ursula Haverbeck for her diligence, courage and honour on behalf of all Germans. Thanks to Lady Michelle and Richard Edmonds for this video and their efforts, and to Prof. Faurisson for informing us of it, as well as, for his many years of struggle for the truth on behalf of our people.

As always, thoughtful comments are welcome, but please do not abuse the privilege with long-winded personal diatribes, to express hatred or violence, nor to promote agendas which this author does not subscribe to.  Please stay on topic and refrain from profanities. Thank you.