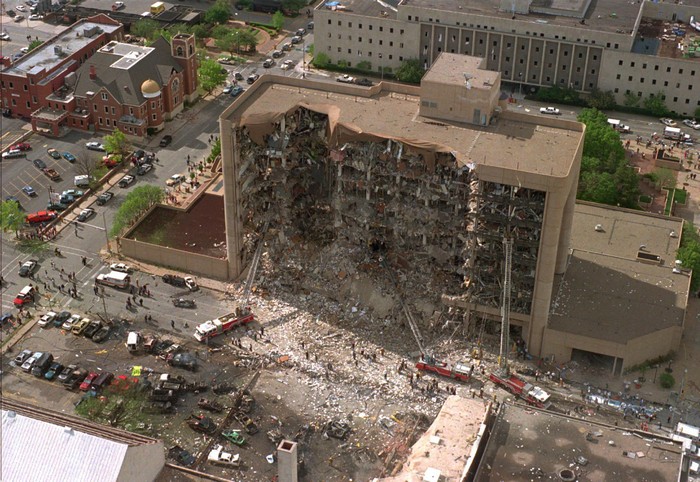 Eric Holder and the OKC Connection

In 2005, just ahead of the Department of Homeland Security (DHS), the Federal Bureau of Investigation (FBI) recovered a box of Kinestik explosives from the home of Terry Nichols, the convicted co-conspirator of Tim McVeigh in the Oklahoma City bombing. An affidavit from Oklahoma City conspirator Nichols about the explosives should have sent out shockwaves when it was filed in November of 2007:

I was asked to . . . disclose the location of the box of explosives . . . that I had taken from Roger Moore’s home in Arkansas. This was the same box of explosives recently discovered at my Herington, Kan. home and seized by the FBI. McVeigh had used this Kinestik as a detonator for his bomb. McVeigh said that when Moore furnished the Kinestiks, Moore had told McVeigh that he knew McVeigh “would put them to good use.” I responded by telling Mr. Selby [Michael Selby, an attorney for the government—Ed.] that I could “give” him Roger Moore. Mr. Selby’s reaction to my offer, however, was not what I had expected. Mr. Selby essentially said “no deal.” Mr. Selby told me that Roger Moore was “untouchable.”

Attached to that affidavit was a “302” (FBI witness statement) filed by Selby, who came to Nichols that day in the Florence, Colorado prison in 2005 on an “off the-books mission” authorized by the highest levels of the Department of Justice.

Moore was the Arkansas gun dealer and FBI informant who worked with Southern Poverty Law Center (SPLC) informant Andreas Strassmeier, the man widely believed to have originally given McVeigh the idea of bombing the Murrah Federal Building in Oklahoma City. Both were handled by FBI agent Larry Potts, a senior FBI official who had allegedly personally ordered the murder of members of the Randy Weaver family at Ruby Ridge, Idaho.

Moore was being “run” by two FBI agents—known as Ross and Hayes—from the Hot Springs, Arkansas office. But the Elohim City operation was not a two-bit FBI sting; it was authorized by top Justice officials.

At the time of the bombing, our current United States Attorney General, Eric Holder, was managing FBI sting operations as U.S. attorney for the District of Columbia —and sitting in line to take over as deputy attorney general, which he did in 1997. One of Holder’s first jobs was to cover up the FBI’s role in the bombing.

“I think they put together this harebrained idea . . . to lure in all these militia groups under the pretense of teaching them how to . . . attack the federal government, and I think they planned to catch them in the act,” stated Jesse Trentadue, a Salt Lake City attorney who has been investigating the OKC bombing through a Freedom of Information Act lawsuit.

But the operation went terribly wrong when the explosives that the FBI authorized Moore to provide to McVeigh ended up being used in the actual bombing. The fingerprints of the two agents running the Elohim City operation were later found on the explosives discovered in 2005 at Nichols’s home.

“The Department of Justice, through the FBI and ATF informants, was involved in the Oklahoma City bombing,” said Trentadue. 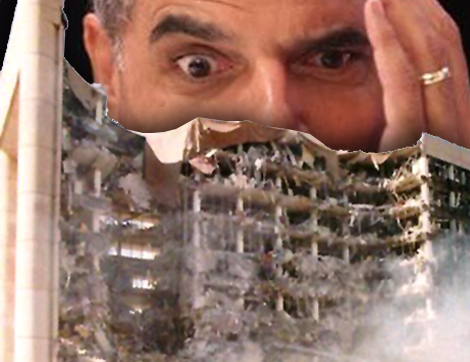 “When you look at these documents, that this was being monitored, this search for the box of explosives at the highest levels within the Department of Justice, right up to and including the White House I think, I mean, this wasn’t your local FBI office handling this,” said Trentadue. “This was being run right out of the Justice [Department] in Washington, D.C.”

Trentadue’s brother, Kenneth Michael Trentadue, was tortured to death in the Oklahoma City Transfer Center because he resembled a man named Richard Lee Guthrie, a bank robber believed to have assisted Moore, McVeigh and Nichols. Guthrie was murdered in his prison cell the day before he was scheduled to tell federal law enforcement officers of his role in the bombing, which was financed by a string of bank robberies that were conducted with the knowledge, assent and involvement of the FBI and the SPLC of the notorious Morris Dees. And a prison mate of Kenneth Trentadue, convicted serial killer Alden Baker, who gave a deposition stating he saw prison guards torture and murder Trentadue, similarly died just days before he was scheduled to testify.

“[There was] a wide-ranging and cynical scheme, run directly by Mr. Holder, to quash my family’s efforts to have my brother’s murder investigated,” said Trentadue. Court records indicate that scheme included murder of those who “knew too much.”

Eric Holder, current attorney general of the United States, managed an FBI operation that provided explosives to Timothy McVeigh and Terry Nichols just prior to the bombing of the Alfred P. Murrah Building in Oklahoma City on April 19, 1995, according to official documents released during the ongoing investigation into government foreknowledge of the supposed terrorist attack.

According to the documentation provided in the Freedom of Information Act (FOIA) lawsuit brought against the Department of Justice by Salt Lake City attorney Jesse Trentadue, the Oklahoma City bombing had aspects of being an FBI sting operation that went out of control. Holder had authorized the FBI to provide explosives to Nichols and McVeigh, then lost track of both the explosives and their targets. McVeigh went on to detonate some of the explosives outside the federal building, an act that was designed to help anti-terrorism legislation pass Congress. But an additional case of explosives was unaccounted for.

After the bombing, when the FBI learned the location of the explosives, Holder reportedly sent emails to FBI agents ordering them to recover the explosives before they could be found by some other branch of the government. FBI agents failed to spot the additional, unexploded explosives during an initial search of Nichols’s home and offered to spare him the death penalty if he would help them recover them.

The case of explosives was, however, recovered by another law enforcement agency and was later determined to have the incriminating fingerprints of two FBI agents, as well as fingerprints of McVeigh and Nichols.

Shortly after the bombing, Kenneth Trentadue, a government informant, was murdered in his prison cell. His family has been pursuing legal action against the federal government ever since.

In 2001, in a bid to avoid a full release of documents, the Federal Bureau of Prisons paid a settlement of $1.1M to several members of Trentadue’s family, but his brother refused to drop the investigation and filed a FOIA lawsuit for the missing documents. That suit has been ongoing in the Salt Lake City federal courthouse.