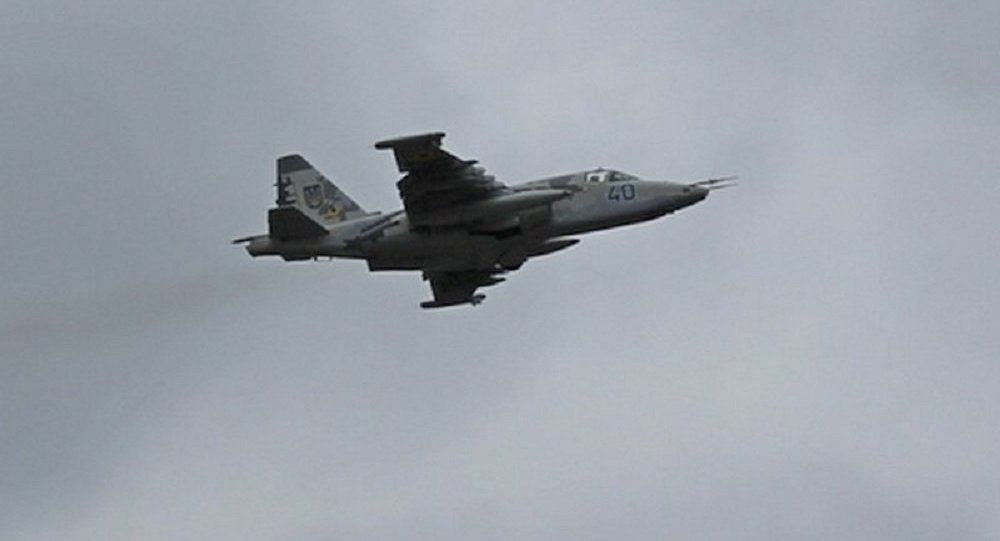 © Ministry of Defence of Ukraine

MOSCOW, December 23 (Sputnik) – A Ukrainian air force Su-25 combat jet took off from an airbase in eastern Dnipropetrovsk carrying air-to-air missiles and returned without them on the day a Malaysia Airlines plane crashed in eastern Ukraine in July, Komsomolskaya Pravda newspaper reported, citing an airbase employee.

The employee, who claims to be an eyewitness, said on July 17 that three Ukrainian combat jets took off, and that one of them, an Su-25, was carrying air-to-air missiles.

“After a while only one jet [of the three] returned, which had had those missiles… It returned without the missiles. The pilot was very frightened,” the man said. The employee stressed that only the returned Su-25 had been equipped with air-to-air missiles, and said he was sure it was not air-to-ground missiles.

The Dutch Safety Board leading an investigation into the crash of Malaysia Airline’s Flight MH17 Boeing 777 in Ukraine’s eastern region of Donetsk is considering evidence on the tragedy from all sources.

The airbase worker said he remembered the pilot saying “the wrong plane” and “the plane was in the wrong place at the wrong time” after he returned from the flight.

The newspaper interviewee did not exclude the possibility that an Su-25 pilot could confuse a Boeing passenger airliner with a military jet.

“This could be. There was quite a long distance, he could have failed to see what exactly that plane was,” the man said.

The missiles carried by the Su-25 (NATO reporting name Frogfoot) are capable of targeting an object at a 3-5-kilometer (1-3 mile) distance, and to an altitude of 7,000 meters (23,000 feet), the source stressed.

“With jet’s raised nose, it is not a problem to fix a target and launch a missile. The flying range of this missile is over 10 kilometers,” according to the man.

He further said that the missile is capable of hitting a plane fuselage, whether directly or from a distance of 500 meters.

The density of the objects which hit the MH17 was very high, and these findings did not exclude the downing of the plane by a missile.

“There is such a missile. It explodes and its shrapnel punctures [the plane]. And after that, the missile warhead strikes it,” the man said.

The MH17 passenger Boeing of Malaysian Airlines crashed on July 17 in the Donetsk region, as it was flying from Amsterdam to Kuala Lumpur. All 298 people on board died.

The incident is being investigated by an international group headed by the Dutch Safety Board (DSB), its final report is expected to be released in 2015. According to the preliminary information of the DSB, the Boeing was hit by “a large number of high-energy objects” penetrating the aircraft from outside, but the source of the objects was not found. 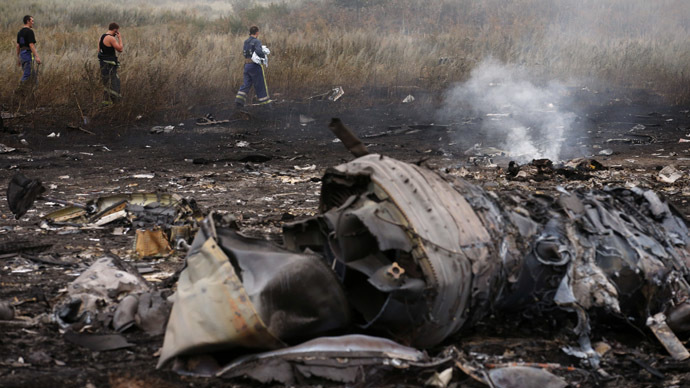 Emergencies Ministry members walk at the site of a Malaysia Airlines Boeing 777 plane crash, MH17, near the settlement of Grabovo in the Donetsk region, July 17, 2014. (Reuters / Maxim Zmeyev)

Russia’s Investigative Committee has confirmed the claims by a Ukrainian, who said he witnessed the deployment of a Ukrainian warplane armed with air-to-air missiles on the day the Malaysian Airlines flight MH17 was shot down.

The interview was conducted on Tuesday, spokesman for the committee Vladimir Markin told the media on Wednesday.

This followed a report in a Russian newspaper, in which the Ukrainian citizen, who preferred to remain anonymous, voiced his allegations.

The investigators used a polygraph during the interview, which showed no evidence of the witness lying, he added.

“The facts were reported by the witness clearly and with no inconsistencies. The investigators lean towards considering them truthful. A polygraph examination confirmed them too,” the official said.

“According to his account, he personally saw the plane piloted by [Ukrainian military pilot] Voloshin armed with R-60 air-to-air missiles,” Markin said. “He added there was no need for such weapons during regular air missions of the Ukrainian Air Forces because the rebel forces had no military aircraft.”

Markin said that the Investigative Committee will continue gathering and analyzing evidence perpetrating to the downing of MH17 and will share the information with the Netherlands-led international probe into the incident, “if they really interested in establishing the truth and send an inquiry.”

The witness is likely to be taken into protective custody in Russia because his life may be threatened, Markin said.

The Ukrainian Security Service confirmed on Wednesday that a Captain Voloshin does serve as a military pilot in the country’s armed services. But it said he didn’t fly any missions on the day the Malaysian Airlines flight was shot down.

The Russian Investigative Committee invited the Dutch or Malaysian experts to check Voloshin using a polygraph, and Ukraine’s Security Service to provide the military log to the official investigation, Markin said.

“The fact that Ukraine’s Security Service has acknowledged Voloshin’s existence is already an accomplishment,” he said.

Markin suggested the air traffic controllers operating in the area on the day of the catastrophe should also be questioned, adding that they should be “found” first.

“It is clear that all this is very difficult, and probably impossible. It is much easier to call the information and evidence provided by Russia’s Investigative Committee ‘fake’,” he said.

The Russian Defense Ministry made public radar data indicating that a Ukrainian military jet capable of taking down the airliner with an air-to-air missile was in the vicinity of MH17 at the time of the incident.

The international investigation’s preliminary report said MH17 was downed by an external force, but would not elaborate on the nature of that force, leaving the parties involved free to trade accusations.