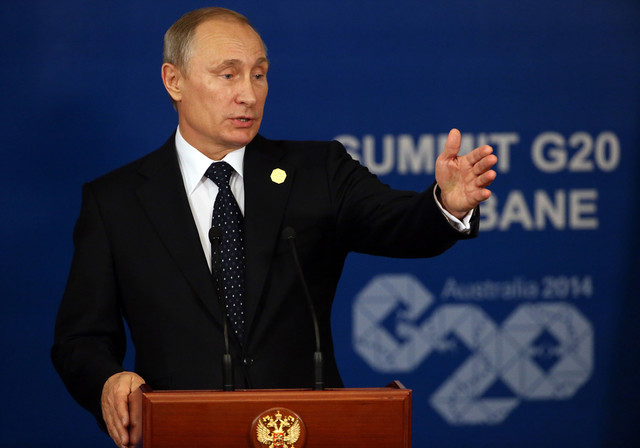 In what the pro-Russian separatists call “an act of genocide,” Ukraine’s President Poroshenko signed a decree Friday that will explicitly withdraw state support for the regions within a month. While appearing to implicitly recognize the regions of Donetsk and Luhansk as autonomous, the decree means that the central bank will no longer service bank accounts, prisoners will be transferred (inmates with minor offences will be released), and perhaps most troubling as the cold winter begins, the order covers all public services, including crucial ones, such as schools, hospitals, and emergency services; and local heating and power plants will be subject to new laws that could involve cutting energy supplies altogether to the plants that don’t pay. Luhansk’s leader exclaimed, “the total socio-economic blockade of Donbass is de facto an act on genocide and devastation of our people,” and as the images below show, bank runs have already begun across the region with long lines forming at ATMs.

As The BBC reports,

Ukraine’s president has ordered the withdrawal of all state services, including funding for hospitals and schools, from rebel-held areas.

Petro Poroshenko issued a decree that also asks parliament to revoke a law granting self-rule to the Donetsk and Luhansk regions.

Kiev has suspended the protection of human rights and ordered the withdrawal of its institutions from areas controlled by local militia in the nation’s east. Rebels have branded the decree, which hits the population on winter’s eve, an ‘act of genocide.’

The move was prepared by the Ukrainian National Security and Defense Council last week and enacted by a presidential decree signed on Friday. It has yet to be ratified by the newly-elected parliament, but the decree explicitly says that this procedure must be expedited – so there is little doubt that the new governing coalition will adopt it next week.

Arguably the most controversial part of the decree is the suspension of the European Convention on Human Rights in rebel-held areas. The convention, which guarantees basic human rights and fundamental freedoms in Europe, has a provision which allows some of its articles to be derogated by a signatory “in time of war or other public emergency threatening the life of the nation.”

Kiev has been insisting that the military campaign it launched against the dissenting provinces is not a war, but an “anti-terrorist operation.” Apparently the operation threatens the life of Ukraine, which will now observe only those provisions of the convention, which cannot be derogated under any circumstances. In particular, they are the right to life, the prohibition of torture and slavery, and the right not to be subjected to unlawful punishment.

In practical terms, the decree orders that many social and economic ties with the self-proclaimed Donetsk and Lugansk People’s Republics be severed. Kiev will withdraw all its officials and evacuate its offices in rebel-held areas. The order covers all public services, including crucial ones, such as schools, hospitals, and emergency services.

Local heating and power plants will be subjected to a “special procedure for accounting supplies of fuel” to ensure that their debt will not grow. This potentially could involve cutting supplies altogether to the plants that don’t pay.

“Poroshenko’s decree on the total socio-economic blockade of Donbass is de facto an act on genocide and devastation of our people,” Igor Plotnitskiy, leader of the Lugansk People’s Republic, said.

And as Sputnik News explains,

Ukraine’s President Petro Poroshenko has ordered a halt in serving bank accounts of enterprises and residents in southeastern Ukraine within a month, said a decree published on the president’s official website Saturday.

“National bank of Ukraine [shall] adopt measures within one month to stop serving bank accounts, including card accounts, that belong to economic entities… and residents in the territories of anti-terror operation in Donetsk and Luhansk regions,” the decree said.

The Ukrainian central bank has been ordered to stop servicing all banks operating in the rebel-held areas. The accounts of individuals living there and companies located there have been frozen. This will stifle the local economy, as businesses will have to conduct transactions in cash or use a bartering system.

At the same time, the rules of taxation and budget transfers between Kiev and local governments in the Donetsk and Lugansk regions will be altered under the decree.

As AFP reports, the bank runs have begun…

People line up to withdraw money from the cash machine at a bank in the eastern city of Donetsk.

The Ukrainian president plans to shut state offices and banks in the region.

What is perhaps even more surprising is that following plans by authorities of self-proclaimed Donetsk People’s Republic plan to open new banks tomorrow to replace the existing branches of one of Ukrainian lenders, Poroshenko has stomped on that idea too..

Almost seems like someone is spoliing for a fight again and is annoyed at the lack of headlines (and cash) his country is getting since the ceasefire began.