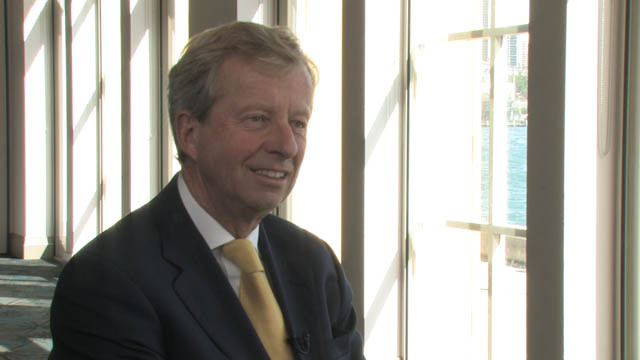 Wealth preservation expert Egon von Greyerz is not bullish on the U.S. dollar.  Greyerz explains, “More and more countries are trying to go away from the dollar, and I think the days of the dollar are counted.  I think the dollar is going to start falling rapidly in coming months and years.  Of course, it already has fallen dramatically in the last few decades, but that will now accelerate.  It will go down to its intrinsic value which is zero, which most currencies do over their lifetime.

Of course, we have the movements in Russia and China with alternative currencies for commodities like oil, etc.  There will be a very disorderly reset with currencies falling.  They can’t all fall at the same time, but they will fall dramatically, and gold will, of course, reflect that.

The stock markets are in a bubble, and they will also fall.  I think the secular bull market we have seen is finished.  Now, we are going to see a very long bear market.  Of course, the biggest bubble of them all, where governments do all they can to keep the bubble going, is the bond market.  We have more debt than ever and interest rates at zero.  That just doesn’t add up.”

Greyerz goes on to say, “You can’t have governments borrow more than ever and have interest rates at zero.  You can only do that temporarily because you have governments printing money and artificially holding interest rates down.  That will not last either.  So, the reset will be dramatic.  It won’t happen overnight, but there will be events that trigger short term pitfalls, but this is a long term thing.”

Greyerz also predicts, “There will be one event after another, and instead of all the good news we have seen . . . now, we will see just bad news coming out.  Sadly, we are just at the end of a major era.”

Greyerz is predicting the end of the U.S. dollar era, and you don’t need a total abandonment for the dollar to crash globally.  Greyerz says, “In any market, you don’t need big sellers to change the price dramatically.  It is always the marginal buying and selling that can make a dramatic difference. . . . If there are sellers and no buyers, that market will collapse.”

Printing money to support the stock market and the bond market will work for a while, but Greyerz warns, “The ammunition that they have will, of course, be so devalued that nobody will want it.  So, any support they try to muster in the future will have no effect.  This is why markets are going to be in a terrible state in the next few years.  It will be all the bubbles that have been created over a very long period.”

On the Swiss Gold Referendum coming at the end of November, where the Swiss will vote for gold backing to their currency, Greyerz says, “Let’s first say that the government is against it.  So, they are in the “No” camp and so is the Swiss National Bank.  They are not supposed to campaign officially in these kinds of referendums, but they still are making clear statements that it is dangerous for the Swiss National Bank to lose its powers to . . .  manipulate the market.  So, the “No” camp are afraid they will lose the power to print money, and manipulation of markets is going to be taken away from the Swiss National Bank.”  Greyerz goes on to say, “It’s too early to call it, but I would say we stand a very good chance.  I am firmly in the “Yes” camp, and I am a great believer in this fight for sound money.”