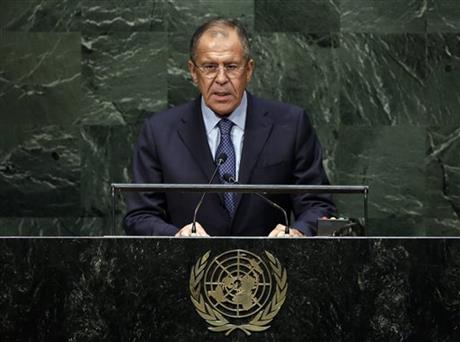 UNITED NATIONS (AP) — The Russian foreign minister issued a blistering attack on the West and NATO on Saturday, accusing them of being unable to change their Cold War “genetic code” and saying the United States must abandon its claims to “eternal uniqueness.”

Sergey Lavrov’s assault appeared to be an extension of the increasingly anti-Western stance of Russian President Vladimir Putin, who is riding a wave of popularity at home with his neo-nationalist rhetoric and policies.

Speaking at the United Nations General Assembly, Lavrov said the crisis in Ukraine was the result of a coup d’etat in that country backed by the United States and the European Union for the purpose of pulling Kiev out of its “organic role as a binding link” between East and West, denying it the opportunity for “neutral and non-bloc status.”

Lavrov also said the Russian annexation of Crimea earlier this year was the choice of the largely Russian-speaking population there. Former Soviet leader Nikita Khrushchev transferred control over the strategic Black Sea region to Ukraine from Moscow in the 1950s.

While the rhetoric was tough, Andrew Weiss, a top Russia expert at the Carnegie Foundation, said the Lavrov speech “hewed closely to themes the Russians have put forward throughout the Ukraine crisis.”

Foreign Minister Sergey Lavrov, of Russia, delivers his address the 69th session of the United Natio …

“Russia has, with its annexation of Crimea, unilaterally changed existing borders in Europe and thus broke international law,” Frank-Walter Steinmeier said in his address to the world body. He spent considerable time speaking about what the West sees as Russian meddling in Ukraine, a nation on the verge of bankruptcy after a series of corrupt post-independence regimes.

Lavrov made no mention of Western allegations that Russia has sent troops and heavy weapons into eastern Ukraine in support of pro-Russian rebels there who have taken over a number of key industrial cities after the ouster of former pro-Russian President Viktor Yanukovich. His departure followed months of demonstrations against his corrupt rule.

Lavrov rejected that Western economic sanctions would cause Russia to reverse course on the issue of Ukraine.

“Attempts to put pressure on Russia and to compel it to abandon its values, truth and justice have no prospects whatsoever,” Lavrov said.

The regime has been using the sanctions in a propaganda drive to build support at home, creating anger against the U.S. and Europe as a distraction from the pain that Russia’s citizens absorb from the punitive measures.

The Kremlin’s growing anger with the United States and Western Europe springs from long-standing and bitter complaints over the past two decades about NATO expansion into former Soviet satellite nations in Eastern Europe and some Baltic nations, once Soviet republics. Lavrov insisted Russia was promised, after the dissolution of the Soviet Union in 1991, that the expansion would not occur.

There now is a cease-fire, though routinely violated, in eastern Ukraine. Lavrov and other Russian officials now say they believe a settlement is possible, given the wobbly cease-fire and new Ukrainian President Petro Poroshenko’s decision to delay implementation of the country’s economic association agreement with the European Union.

But, Lavrov said, the Ukraine crisis should be a lesson to Washington and NATO against trying to break “the deep-rooted and fraternal ties between the two peoples” of Russia and Ukraine.