Peak Debt – Why The Keynesian Money Printers Are Done

Peak Debt – Why The Keynesian Money Printers Are Done

Bloomberg has a story today on the faltering of Draghi’s latest scheme to levitate Europe’s somnolent socialist economies by means of a new round of monetary juice called TLTRO – $1.3 trillion in essentially zero cost four-year funding to European banks on the condition that they expand their business loan books. Using anecdotes from Spain,the piece perhaps inadvertently highlights all that is wrong with the entire central bank money printing regime that is now extirpating honest finance nearly everywhere in the world.

On the one hand, the initial round of TLTRO takedowns came in at only $100 billion compared to the $200 billion widely expected. It seems that Spanish banks, like their counterparts elsewhere in Europe, are finding virtually no demand among small and medium businesses for new loans.

Many small and medium-sized businesses are wary of the offers from banks as European Central Bank President Draghi prepares to pump more cash into the financial system to boost prices and spur growth. The reticence in Spain suggests demand for credit may be as much of a problem as the supply.

The monthly flow of new loans of as much as 1 million euros for as much as a year — a type of credit typically used by small and medium-sized companies — is still down by two-thirds in Spain from a 2007 peak, according to Bank of Spain data.

On the other hand, Spain’s sovereign debt has rallied to what are truly stupid heights – with the 10-year bond hitting a 2.11% yield yesterday (compared to 7% + just 24 months ago). The explanation for these parallel developments is that the hedge fund speculators in peripheral sovereign debt do not care about actual expansion of the Spanish or euro area economies that is implicit in Draghi’s targeted promotion of business lending (whether healthy and sustainable, or not). They are simply braying that  “T” for targeted LTRO is not enough; they demand outright sovereign debt purchases by the ECB – that is, Bernanke style QE and are quite sure they will get it. That’s why they are front-running the ECB and buying the Spanish bond. It is a patented formula and hedge fund speculators have been riding it to fabulous riches for many years now.

But don’t call these central bankers crooked patsies – they are just dimwitted public servants trying to grind jobs and growth out of the only tool they have. Namely, buying government debt and other existing financial assets in the hopes that the resulting flow of liquidity into the financial markets and the sub-economic price of money and debt will encourage more borrowing and more growth. This is the core axiom of today’s unholy alliance between financial speculators and central bank policy apparatchiks.

Stated differently, today’s Spanish anecdote is just another proof that central banks are pushing on a string; that is, aggressively and incessantly pumping money into financial markets even though the result is wildly inflated asset prices, not expanded business activity. But as is always the case with central bank created financial bubbles, the beneficiaries are happy to pocket the windfalls while the apparatchiks blunder on – pretending not to notice the drastic financial distortions, malinvestments and mis-pricings all around them.

Admittedly, Draghi is one of the dimmer tools in the shed of today’s central banking line-up. But surely even this monetary marionette might possibly wonder about a 2% Spanish bond yield.  After all, virtually nothing has changed there since Spain’s 2012 fiscal and economic crisis. The nation’s unemployment rate is still above 20%, national output is still 7% below where it was six years ago and soaring government debt will soon slice through the 100% of GDP mark.

Moreover, Spain is still saddled with the wreckage of a massively bloated development and construction industry, its government is led by corrupt fools who apparently believe their own lies about “recovery”, and its most prosperous province is next for secession voting. 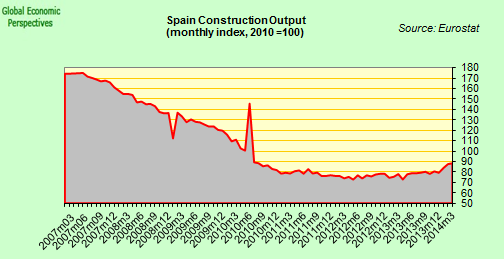 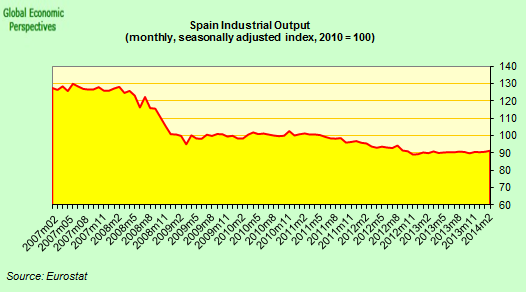 Needless to say, Draghi and his compatriots in Frankfurt have no clue that they are being played for fools by the carry trade gamblers who have piled into peripheral debt ever since the ECB chairman’s foolish “anything it takes” pronouncement. Yet it is only a matter of time before the growing German political revolt triggers a day or reckoning. When it becomes clear that Germany has vetoed once and for all a massive spree of government debt buying by the ECB, it will be katie-bar-the-door time. The violent scramble of speculators out of Spanish, Italian, Portuguese etc. debt will be a day of infamy for the ECB and today’s destructive central banking regime generally.

But pending that it might also be wondered why the apparatchiks who run our central banks seem to believe that the capacity of households and businesses to carry debt is virtually unlimited—–that there is no such thing as “peak debt” or a law of diminishing returns with respect to the impact of cumulative borrowing on economic activity. Thus, the Bloomberg article notes that the total stock of Spanish business loans (above $1m) is almost 470 billion euros or 25% below the 2008 record of 1.87 trillion euros. The implication is that there is plenty of room for lending to “recover”—-the exact predicate behind Draghi’s program.

But as shown below, that glib assumption simply ignores the history of what has gone before—-namely, that the temporary prosperity leading up to the 2008 financial crisis was a one-time Keynesian parlor trick that used up the available balance sheet headroom and then some. It resulted in a collision with “peak debt” that has fundamentally changed the macro- economic dynamics.

In the case of non-financial business debt, for example, the balance outstanding soared by a factor if 4X in Spain during the 9-year construction and investment boom that preceded the crash. About one-fourth of that unsustainable debt explosion has been liquidated since 2009, but even then business debt has grown at a CAGR of 8.0% since 2000—-a rate significantly higher than Spain 3.5% rate of nominal GDP growth over that 14-year period.

Likewise, household debt nearly doubled as a share of GDP in the 7 year boom before the financial crisis. The household debt ratio has now backed off marginally, but relative to history and the rest of the world it is still unsustainably high. The idea that there is major headroom for a robust recovery of household borrowing is simply wrong. Indeed, Spanish household debt today would amount to $14 trillion on a US scale GDP—a level that is 20% higher than the unsustainable burden still being lugged around by main street households in shop-until-you-drop America.

Needless to say, Spain is but a microcosm of a worldwide condition under which maniacal money printers in the central banks are smacking up against peak debt in their domestic economies. As shown in the graph below, outside of Germany the debt disease has been universal. During the eight years after the turn of the century, the leverage ratio for all industrial economies combined ex-Germany—-that is, total public and private credit outstanding relative to GDP—rose from 260% to 390% of GDP. That incremental debt burden in round terms amounted to about $50 trillion.

And despite all the official palaver about how economies have sobered up and begun to delever—-the data make clear that nothing of the kind has happened. Owing to massive expansion of government borrowing and debt ratios since 2009, total credit outstanding has now soared to 430 percent of GDP for the ex-Germany industrialized world. This figure is so far off the historical charts that it could not have even been imagined 15 years ago when worldwide central banks went all-in for money printing. 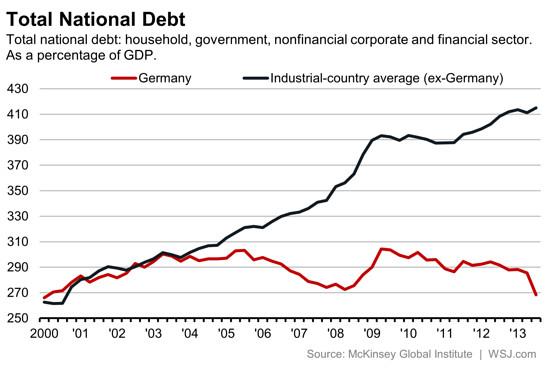 Nevertheless they have continued to push on a string. At the turn of the century, the six major central banks had combined balance sheets of $2 trillion. Today the figure is $16 trillion and is therefore 8X larger. That compares to world GDP growth of about 2X during the same period. Self-evidently, all the major economies are saturated with debt. Accordingly, central bank balance sheet expansion has lost its Keynesian magic entirely. Now the great sea of freshly minted liquidity simply fuels the carry trades as gamblers everywhere load up with any asset that generates a yield or short-run capital gain, and fund these bloated positions with cheap options and repo style finance.

But here’s the obvious thing. Central banks can’t normalize interest rates – that is, allow the money markets to rise off the zero-bound – without triggering a violent unwind of the carry trades on which today’s massive asset inflation is built. On the other hand, they can no longer stimulate GDP growth, either, because the credit expansion channel to the main street economy of households and business is blocked by the reality of peak debt.

So they end up like the pathetic Mario Draghi – energetically pounding square pegs into round holes without a clue as to the financial conflagration lurking just around the corner. Yes, the era of Keynesian money printing is over and done. But don’t wait for the small lady at the Fed to sing, either.