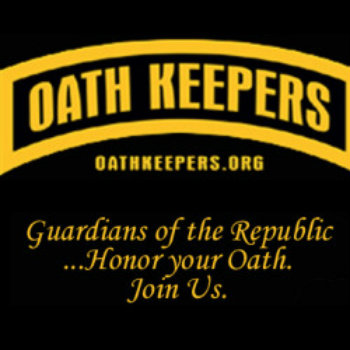 Here is a portion of a statement released by Oath Keepers yesterday:

In that correspondence, we requested that the officials at the NYSIC issue a public correction, indicating their error in classifying New York Oath Keepers as a far-right extremist group and/or a threat to law enforcement. We also requested a meeting with the Governor, the Superintendent of the New York State Police and/or officials from other NYSIC member organizations, so we could address any misinformation and misunderstandings about the New York Oath Keepers mission. We told them that It is our goal to see this extremely prejudicial “far-right extremist” label retracted and the necessary corrections made to the Bulletin.

A month and a half has passed and neither the Governor nor the Superintendent of the New York State Police has seen fit to even reply to our original correspondence.

So, today the New York Oath Keepers, an organization consisting of thousands of active duty and retired military, police and fire personnel, who have at one or more times in their lives taken an Oath to protect and defend the Constitution of the United States of America, sent them a second letter. We also sent a letter to the Special Agent in Charge of the Albany Office of the FBI, as they are also key members of the NYSIC.

The full statement is up on the official Oath Keepers site here which includes copies of all letters (including the latest) sent to New York Governor Andrew Cuomo.

Some 58 fusion centers were created by the Department of Homeland Security in the wake of 9/11, supposedly to help fight terrorism through local data intelligence gathering. This is not the first time that one of these fusion centers has criminalized anyone outspoken against tyrannical government control and the destruction of the Constitution of the United States and the rights of the American people.

The Missouri Information Analysis Center, or MIAC, which Fox News describes as, “a government collective that identifies the warning signs of potential domestic terrorists for law enforcement communities,” identified Constitutional militia members and even Ron Paul supporters as potential terrorists.

Oath Keepers, meanwhile, is a nonpartisan group made up of current and formerly serving military, police, and first responders who have pledged simply to fulfill the oath all military and police take — to “defend the Constitution against all enemies, foreign and domestic.” [emphasis added]

It’s that part about Oath Keepers standing up to defend the law of this land, our Constitution — something Homeland Security has been actively destroying since its inception with leaked DHS training videos referring to America’s founding fathers as domestic terrorists and ludicrous actions like thecreation of “100-mile inland Constitution-free zone” checkpoints around the nation’s border, that seems to be the real issue here.

Branding liberty minded groups and those that would stand up for our rights and the Constitution as potential domestic terrorist threats is essentially branding them as criminals, setting them up under a dubious legal framework, and paving the way to make government dissent a crime.