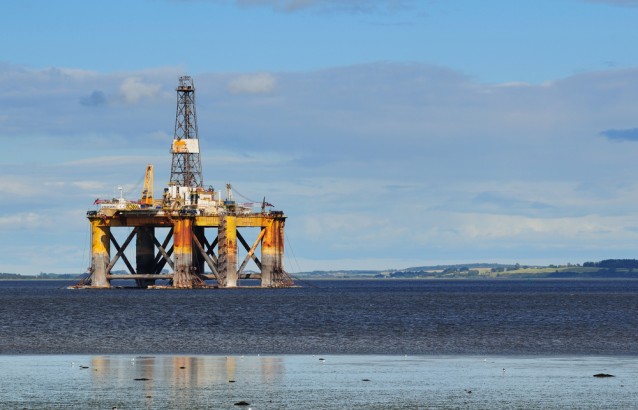 An oil platform off the coast of Scotland. CREDIT: SHUTTERSTOCK

An independent Scotland would take much of the U.K.’s renewable capacity with it, and its population would be more opposed to fracking than the U.K. as a whole. At the same time, it would count on oil drilling income to fund much of its government, and it might lose out on new investments in renewable energy.

These are among many conflicting energy and climate issues Scotland is weighing as it voted Thursday on whether it will split from the United Kingdom and make itself an independent nation for the first time in three centuries. Voting began at 7am local time, with the latest polls showing a very close race between ‘yes’ and ‘no’, and a tiny advantage for ‘no’.

Oil and gas in the North Sea have taken a central role in the decision. Advocates for independence hope Scotland would get 90 percent of the current revenues from oil in the North Sea. That percentage would be subject to negotiation after the vote, but appears to adhere to the Geneva agreement on natural resources under the sea. The current Scottish independence movement can even trace some of its power to the discovery North Sea oil, after which the Scottish National Party (SNP) famously declared “it’s Scotland’s oil” and won eleven seats in Parliament, the party’s high point in Britain’s national government.

Alex Salmond, the First Minister of Scotland, head of the SNP, and one of the leading voices in favor of Scottish independence, has promoted the idea that there are 24 billion barrels of oil remaining to be tapped in the North Sea, worth £1.5 trillion ($2.4 trillion) in revenue. A Scottish energy consultancy company disputed that count Wednesday, saying only 15.3 billion barrels of oil remain, and 84 percent could be claimed by Scotland.

Still, proposed plans for a Norway-like sovereign wealth fund would be a good way to deal with declining revenues. As Yes Scotland points out, Norway puts oil revenues into a fund that has invested them abroad and accumulated money since 1996, now worth over $700 billion. The main problem Norway currently faces with the fund is that it’s so big, some in the country are arguing it needs to be split into several smaller funds. The money is there to cushion Norway when the oil inevitably runs out and the government can’t rely on its revenues anymore, in addition to functioning as a sort of rainy day fund for any unforeseen government expenses. Norway’s fund also began requiring investment in renewable energy this year, meaning the revenues from fossil fuels go to reducing their use in the long run. Several U.S. states, most notably Alaska, and dozens of other countries have their own sovereign wealth funds as well.

While sovereign wealth funds aren’t a silver bullet, they’ve been an effective method for countering exactly the problem that Scotland could face with independence: reliance on a natural resource that will be highly profitable for some time before declining and running out. The U.K. has pumped billions of barrels of oil out of the North Sea, andwould have hundreds of billions of pounds in its own fund now according to a 2008 paper, had it acted like Norway. Instead, beginning with the conservative Thatcher government, the U.K. spent the money on tax cuts for the wealthy. Whatever amount of untapped oil remains in the North Sea, it’s hard to see how it would be more responsibly managed by the U.K.

A report from Bloomberg New Energy Finance released Monday promoted the idea the the uncertainty inherent in independence could delay and discourage new and planned renewable projects. Like with many aspects of independence, it’s unclear how much of an effect this would have, though one leading renewable company, Infinis Energy, is delaying investment in two Scottish wind projects until after the vote.

If an independent Scotland does miss out on new renewable investments, its government would likely work to counter that. The SNP and Alex Salmond have campaigned on climate change and promoted Scotland’s leading role in reducing carbon emissions. Signs point to Scotland forming a more left-leaning nation than the U.K., though still solidly neoliberal, both on climate issues and others as diverse as health care and education. Scottish people are the most skeptical of fracking in the U.K., according to the Nottingham Shale Gas Survey, despite the importance of oil and gas to the economy.

If Scotland votes for independence, the question of currency and which international organizations it can join will likely be most pivotal for the success of the new nation. But energy and environmental issues have played an important role in the push for independence, and would continue to be central to Scotland’s future.