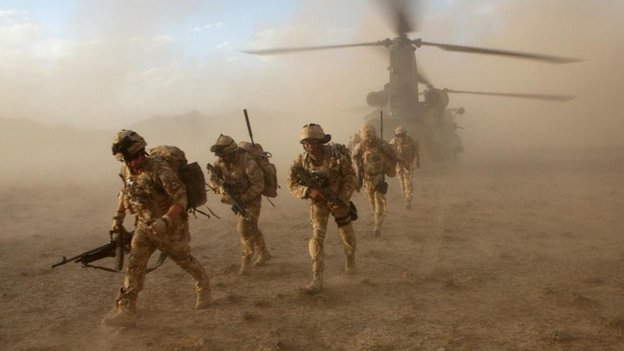 Soldiers of Scottish battalion The Black Watch serving in Afghanistan

In a letter in the Sun, 14 former armed forces chiefs said a No referendum vote was “critical for all our security”.

Breaking up Britain would “weaken us all”, they added.

First Minister Alex Salmond cited military and naval figures who backed a “Yes” vote and said the letter’s writers should “not try to use people’s service for political reasons”.

In an “open letter to the people of Scotland”, they expressed concern about the possibility of a separate Scottish military.

“As former chiefs of the Royal Navy, British army and Royal Air Force, we know it is fiction to talk about regional armed forces,” they wrote.

“We train as one, fight as one and are under one command. We are not, and have never been, structured for division.”

They said a vote for separation would “undermine both Scotland and the rest of the United Kingdom’s defence”.

“At risk is the most successful alliance in history and one which has seen men and women from all parts of the country play their part in securing the liberties we now enjoy,” they continued.

“This unity has guarded our borders and given us the space to prosper in a troubled world.”

The letter concluded: “The division of the UK may or may not be politically or economically sensible, but in military terms we are clear: it will weaken us all.”

Interviewed on Radio 4’s Today programme, Mr Salmond cited support for independence by Jimmy Sinclair, a 102-year-old former Desert Rat, and Lt-Cdr Colin May, who recently retired as a senior Royal Navy intelligence officer at the Faslane submarine base.

There was “a whole range of other people who’ve served this country coming out in favour of a ‘Yes’ vote,” said Mr Salmond.

“With due respect to General Dannatt, people like Jimmy Sinclair didn’t serve for him; they served for the Queen and for democracy.

People “should listen to the words of serving soldiers and make it clear that… you can believe in democracy and independence for Scotland and be a loyal solider.

“General Dannatt should go and have a talk with Jimmy Sinclair and not try to use people’s service for political reasons.”

In the referendum campaign on Tuesday, both sides seized on a pledge by the three main Westminster parties to devolve more powers.

Yes Scotland described it as an “insult” to voters but Better Together said it was “a vision around which Scotland can unite”.