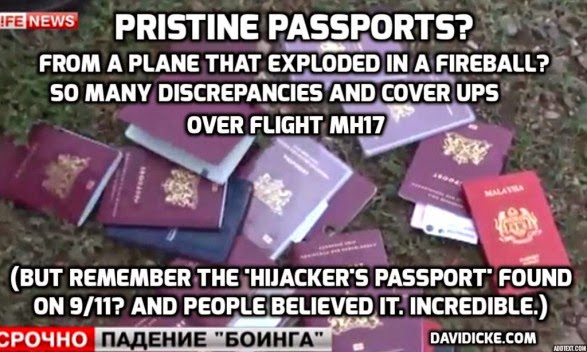 I have just come across this and I believe it is necessary to post the translation of this very graphic and disturbing, but extremely damning video. Please keep in mind that the site that has posted this video, ‘AnnaNews,’ keeps being deleted by YouTube for their unbending drive to tell the truth. However, it keeps coming back up. Watch the video asap, to avoid missing out in case of deletion.

Below, I have translated the main points of the commentary by the independent journalist Alena Kochkina, who was at the site of the MH17 crash 20 minutes after the event and who took the pictures in above video.

Translation of the main points:

“These body parts, there was some kind of liquid coming out of them as shown – not blood. This is what it looked like by day; by night the liquid around bodies looked strangely green. Very little, or no blood. The bodies looked like they were stored somewhere. There was an odd concentration of bodies, seemed like they were concentrated in 2 parts of the plane. It was impossible to stand by one of the plane parts – the smell of chemicals was overwhelming, as if in a morgue. Body parts didn’t look like they came from living people. There were birds that got hit and died. I took their pictures – by contrast, their bodies looked like they were those of living things, a very different look compared to the human bodies. Again and again, stressing that there was no blood and people didn’t seem like they were just recently alive.

Most passengers seemed of Asian look, so it is unclear how so many could have been Dutch. Only 20 bodies had clothes on, the rest were stark naked. Even though it can be that their clothes got blown off during the fall, but wouldn’t at least something like a sock, or a trace of a belt on their waste, be left? Only 7 were children, not half the plane as the West was saying.

It was curious that so many passports were left absolutely intact, with no traces of any damage. Another curious thing was that passports were also concentrated in one or two spots. (As was noted by other analysts, many Dutch and other passports collected from the plane had round holes, which is how inactive passports past their expiration date are marked in the US/EU – LR).

Electronics: mobile phones, notebooks were collected. We looked especially for dates. All private photos we found in victims’ phones were from 2013. None from 2014.” (This corroborates what so many have said that this Malaysia Airlines plane was in fact the same Boeing 777 that “was disappeared” earlier over the Indian Ocean and was believed to have been at the US Diego Garcia base – LR).

A word from Lada:

It is no secret that US and Ukraine desperately needed this false flag: 1. Kiev junta was losing on all fronts and it was necessary to stop the Donbass self-defence successful advance. 2. US was having trouble making EU go along with the third round of sanctions against Russia – as we know, after MH17 incident, EU immediately agreed to anti-Russian sanctions. 3. Both US and Kiev were (still are) desperate to drag Russia into an open war and to defame Putin. See more analysis in articles listed below.

MH17 Amsterdam-Kuala Lumpur was the second Boeing 777 belonging to Malaysian Airlines (the company I flew several times to Asia, and enjoyed it) that had a mysterious catastrophe in less than a year. The first one, flying from Kuala Lumpur to China, disappeared earlier with all passengers on board, mainly Asians.

Clearly, Malaysia is being targeted because of the 2013 Kuala Lumpur international tribunal that convicted of war crimes Bush, Cheney, Netanyahu, and others. Second Malaysian airliner in a row isn’t any accident. One of the organizers of the KL war crimes tribunal was the former PM of Malaysia, who just happens to also be the founder of Malaysia Airlines. Read related:

On another note, the Russian Space Industry – one of Russia’s flagship achievements, her pride and joy, has suddenly started suffering unexplained failures. These strange failures ALWAYS happen when an unmanned satellite is being launched, and ALWAYS when Russian rocket carries a foreign satellite(s). It happened a year or so ago with a unique Chinese satellite on board. Before that, there was a failure of a very expensive and promising project when communication with the satellite was lost while it was flying over the North American space. Russian scientists announced that they registered the signals from the US radars directed at the Russian satellite that damaged the craft’s equipment.

One of my readers just wrote to me that another Russian rocket carrying French satellite has failed a few days ago. The Western MSM now says that the future of the Russian Space Industry is in question. Of course! This is exactly what they wanted to achieve.

Historic perspective: Russian space industry had NO lauch failures for over 40 years, not even in the 1990s, when the country was falling apart. After US was forced to scrap its programs after repeated failures, the Russian Soyuz and Progress became the only way for Americans to get to the ISS, and for the whole world to lauch their satellites.

As soon as the US space program failures became evident and Americans had to admit they had to hitch a ride to the ISS via Russian vehicles, the Russian Space program started experiencing problems.

I won’t beat around the bush: this is none other than yet another blatant sabotage – this time of the Russian Space program. It is necessary for the US to malign the Russian Space Industry, which unlike the American one, had stellar reputation. How this is achieved is a different story: scrambled radio signal, laser weapon, or my idea that it was simply the ordinary sabotage of the craft’s electronics. Some of the Russian space electronics has been, regrettably, outsourced to the US. I wrote about it in: What Brought Down Russian Satellite? Angela Merkel’s Biggest Fear? Plus Ukraine Election Prediction.

There is no such thing as honest trade or honest competition as far as the Western “free” capitalism is concerned. Let’s face it – it was always a predatory, ruthlessly carnivorous system. The American system (even more precisely, Anglo-American system) simply pretended to be nice for about 10-15 years after it managed to destroy the Soviet Union. It could afford it while Russia was weak in the 1990s. But not any more, as Russia is again the competitor to be feared, and therefore, the enemy number one. I wrote about that in my book The Earth Shifter.

P.S. I just listened to Putin’s Q&A at the annual Seliger Youth Forum in northern Russia, and noticed that he continues to steer the world, and his own citizens, towards reason, cooperation and a peaceful resolution of the flaming global conflict. Full 2 hour 25 min Q&A with Putin in Russian (I’d like to see Obama, or any other Western figurehead, answer for 2.5 hours non-scripted questions from all areas of economy, politics and every day life!). At the same time, US and its EU puppets are doing absolutely everything in their power to continue dragging the world towards the last war.

US congress (lc deliberate -LR) just adopted a new, extremely provocative and bellicose law called “The Russian Aggression Prevention Act” or RAPA. I am wondering, when will the world adopt “The US Aggression Prevention Act”? I have been saying all along that it is up to us to tip the scale towards peace. I wouldn’t hope that Washington would choose peace of its own free will.