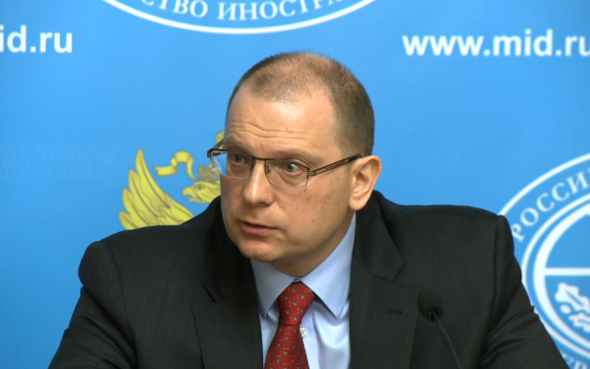 People are moved peacefully by a line of police as authorities disperse a protest in Ferguson.  © AP Photo/ Charlie Riedel

“We think US authorities should pay closer attention to burning internal problems, including those related to ethnicity and race that still exist in the United States. Try to solve them via legal constitutional practices rather than unjustified and inadequate violence,” Dolgov said.

“What is happening in Missouri right now should have a sobering effect on US society and authorities. They are systematic problems. They are by no means limited to one particular city or state,” the commissioner added.

Dolgov pointed out the regularity of such confrontations and warned of a possible increase in the frequency of the conflicts. At the same time, US authorities are failing to create a dialogue with US citizens, as they rely too heavily on the use of brutal force, according to Dolgov.

The Russian official also mentioned the way the Missouri authorities treated the media. Since the beginning of the protests, 11 members of the press have been detained while attempting to cover the events in Ferguson.

Dolgov said the police actions stemmed from a desire to avoid showing Americans images the US government deemed negative. This policy contradicts Washington’s promotion of freedom of speech that now appears to have been violated in the Unites States itself.

Ferguson, a predominantly African-American suburb of St. Louis, has been shaken by protests since the police killing of Michael Brown, an unarmed 18-year-old teenager, on a residential street on August 9.

African-American residents, about 65 percent of the local population, often complain about harassment at the hands of the police.

Missouri National Guard troops have been deployed to tackle the violence, which has grown fiercer, according to the police. Law enforcement officers have been criticized for using tear gas, rubber bullets and other heavy-handed measures.