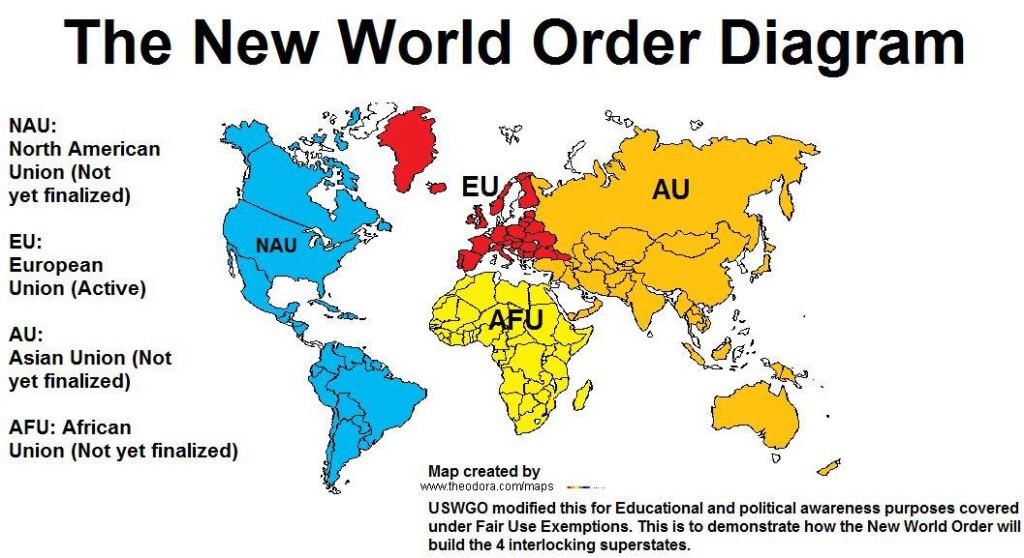 Recent events in the Middle East have been unfolding in a way that was explained to this writer several years ago by the gnostic illuminati. Since their predictions are coming true, it is worth mentioning other predictions and agreements reached by major secret societies behind the scenes.

In the Middle East, Al Qaeda, now rebranded as ISIS, a Western organization headed by an Eastern European former comintern agent, wishes to erase the artificial borders created by colonial powers during the 20th century. Their aim is to create a new caliphate ranging from North Africa to the borders of Iran. This caliphate will have a loose federal structure based on historical ethnic boundaries. There will also be an 800 years overdue peace accord reached between the Shia and Sunni factions of the Islamic world. The Shia will form part of a Persian empire that will include parts of what is now Iraq, Syria and Lebanon. The Sunnis will be divided ethnically mainly into Arabs, Kurds and Turks. Israel will become a Jewish autonomous zone within the caliphate. The borders of the caliphate will extend across Northern Africa. At least that is the plan as explained to this writer by the gnostic illuminati, members of the BIS, members of the P2 lodge and other sources.

There may be some moving of ethnic groups to new regions in order to make possible the creation of trouble free borders, the sources say. This could lead to some further turmoil before the dust settles.

Sub-saharan Africa is also already in the process of becoming an African Federation. The artificial colonial boundaries are expected to be redrawn along ethnic and linguistic lines. The exploitation of Africa, where resources are removed from the region by tax-evading transnational corporations, is already in the process of being phased out. As the process ends, Africans will become more like Arabs in the sense they will be rich as a result of natural resources.

South America is also forming a Federal government union. Right now there is a tug of war between the North Americans, who want to merge South America with North America, and the Europeans and Chinese who would like to deepen their connections with an independent South America. The Chinese are using the BRICS alliance as their method of seduction. The Europeans are using an Argentine Pope. The Americans are trying to open their borders to attract immigrants and create a de-facto union with Latin America. That is what is behind the US government orchestrated campaign to welcome Latino immigrants. In the end, the loose political structure will be what the Japanese call “Tamamushi coloured.” The Tamamushi is a beetle that appears to be different colours when seen from different angles. In other words everybody will see the colour they want to see in the new arrangement.

The United States, as part of its shift East, will become increasingly integrated with China, its main source of finance. The result is likely to be a surge in immigration from China and an increasing Chinese corporate presence. This will be especially true for the West coast where some cities, like San Francisco, are likely to end up with Asian majorities. The Pentagon and the military industrial complex will try to morph into the foundations of a global defense force. We are already seeing efforts by the pentagon to integrate with Chinese, Japanese, South Korean and other nation’s armed forces. The type of government envisioned by the pentagon is meritocracy. The example they hold for this new government is of the sort seen in the Star Trek TV shows and movies.

For Europe, the long term scenario calls for the center of European power to shift to Germany and Russia. The dispute over the Ukraine and possible up-coming troubles in Eastern Europe, especially Serbia, are part of the process of settling the borders of influence between Russia and Germany. The French and Mediterranean countries will find their economies increasingly dominated by Russian and German influences, including large flocks of Russian tourists along the Mediterranean. England is expected to stay aloof and try to remain an international trading and financial hub increasingly neutral along the lines of Switzerland. Militarily, it will stick with fellow Anglo Saxon countries like Australia, Canada, New Zealand and the United States.

In Asia, China will assume its traditional role as the Middle Kingdom. Their view is to be seen as a place of compromise and moderation and win-win solutions. The Chinese also say they want to have the influence they deserve as the nation with the largest population and largest economy on earth. However, and history backs this up, they do not see any profit to be made from being militarily aggressive or trying to control other countries.

The nations of Asia outside of China will remain separate from the central core for good historical reasons. The Mongolians, Koreans and Japanese are all members of a distinct linguistic group that traces its ancestry to the pastoral peoples of the Eurasian plains. Their language is very different from Chinese, with a basic difference in word order. While in English and Chinese the word order is subject, verb, object (I go home), for the pastoralists it is SOV as in I home go. Nonetheless, as has always been the case, the pastoralists will retain deep ties with their farming Chinese neighbours.

South East Asia, for its part, is dominated by people who fled China during various periods following regime change so they also have a historical allergy to excessive central Chinese control. In other words, East Asia will be roughly divided into China and non-China East Asia.

The other giant power that will possibly grow to equal, or even overshadow China is India. India has a much younger population than China. The percentage of Chinese under 15 years old is 17% compared to 31% for India. Also, 50% of India’s population is under 25 years old and 65% under 35 while China is rapidly aging. India is also expected to start booming under the recently elected Modi government. So, demographic trends as they stand now show India will start to overtake China within a couple of decades. Chinese government officials, for their part, are studying the possibility of importing brides from India to make up for the excess amount of un-married males created by China’s one-child policy.

The long term end result of such a demographic move could eventually become something known as Chindia.

These long term economic, political and demographic trends are going to force an end to the current Western dominated United Nations, World Bank, International Criminal Court, IMF, BIS etc. structures. The Western nations, especially the United States, have now the choice of either fairly opening their international institutions to the rest of the world, or just keeping their heads in the sand and slowly withering away.

The other big issue the peoples of the planet will have to deal with sooner rather than later is the question of how to regulate large transnational corporations. Many of the biggest corporations are more powerful economically than most nations of the world. Because they operate across borders, they constantly seek loopholes and migrate to places where corrupt officials let them get away with murder, pollution, tax-evasion etc. Either new international institutions and regulations are put into place to control them, or corporations will take over the world. When corporations take over the government it is known as fascism. In other words, if the nations of the world do not do something about this situation ASAP we will end up with the fascist New World Order.