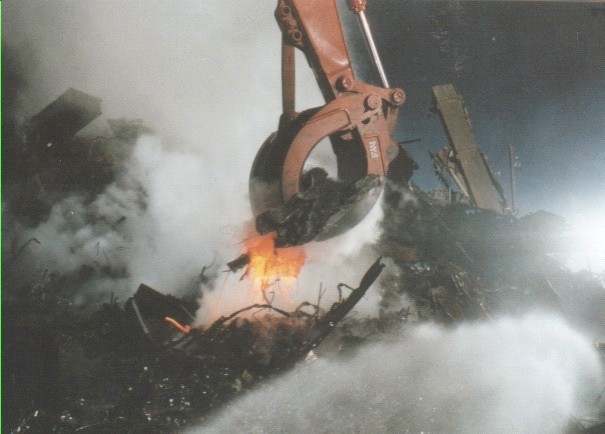 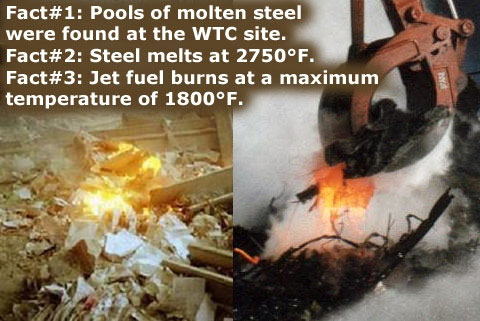 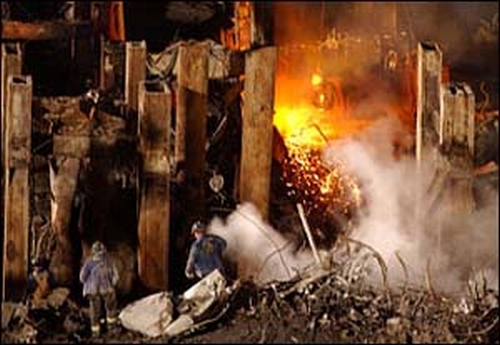 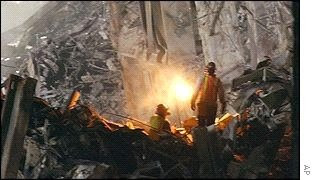 Extremely high temperatures were evident before and during the destruction of the World Trade Center Twin Towers and at Ground Zero. Seven minutes before the destruction of the South Tower, a flow of molten metal appeared, accompanied by several smaller flows, as documented by the National Institute of Standards and Technology (NIST). The material’s glowing color showed that its temperature was close to “white hot” at the very beginning of the flow and “yellow-orange” further down. Iron-rich spheres in the WTC dust are additional proof of temperatures above the melting point of iron. Pyroclastic-like, rapidly expanding dust clouds after the destruction of the Towers can also be explained only by the expansion of hot gases.

The high-temperature phenomena at Ground Zero are documented by various sources:

Bechtel engineers, responsible for safety at Ground Zero, wrote in theJournal of the American Society of Safety Engineers: “The debris pile at Ground Zero was always tremendously hot. Thermal measurements taken by helicopter each day showed underground temperatures ranging from 400ºF to more than 2,800ºF.”

The fact that high-temperature phenomena were an important issue at Ground Zero is underscored by the large number of thermal images acquired: images by SPOT, MTI,AVIRIS/NASA, “Twin Otter”/U.S. Army, and at least 25 images by EarthData, taken between Sept. 16 and Oct. 25. In addition, temperature measurements by helicopter weretaken each day, and the firefighters used onsite sensors too.

Many witnesses, including rescue personnel and firefighters working on the piles, described the phenomenon of “molten steel.” Terms used in witness statements are, for example, “molten steel,” beams “dripping from molten steel,” “molten steel … like you’re in a foundry. Like lava, from a volcano.” A photograph taken on September 27 by a Ground Zero worker shows an excavating machine lifting debris from the WTC wreckage dripping yellow/orange molten metal.

WTC clean-up workers and 9/11 artifacts architect Bart Voorsanger, in the PBS video “Relics from the Rubble,” described what must have been several tons of “fused element[s] of steel … molten steel and concrete and all of these things …all fused by the heat,” weighing several tons each. These foreign objects came to be known as “meteorites.”

The heat at Ground Zero was not only extreme, it was also persistent, as proven not only by witness statements and a photograph by LiRo Group / Engineering of orange-red glowing steel as late as October 21, but also by thermal images taken by NASA andEarthData satellites. The EarthData thermal images also show that the “hot spots” remained at the same locations.  The phenomenon did not “move” across the site, like one would expect from fire as it consumes the fuel available in any one location.

University of California professor Abolhassan Astaneh-Asl, the first structural engineer given access to the WTC steel at Fresh Kills Landfill notes, “I saw melting of girders at the World Trade Center.” Astaneh also “describes the connections [between supporting columns] as being smoothly warped: ‘If you remember the Salvador Dalí paintings with the clocks that are kind of melted – it’s kind of like that. That could only happen if you get steel yellow hot or white hot – perhaps around 2,000 degrees.’”.

Iron workers at the site pointed out that huge columns that were bent into horseshoe shapes – without the flanges showing any cracks or buckling.  They cited, “It takes thousands of degrees to bend steel like this”.

FEMA documents in their Appendix C of its May 2002 WTC Building Performance Assessment Team study, for sample 1, “evidence of a severe high temperature corrosion attack on the steel, including oxidation and sulfidation with subsequent intergranular melting.” A “sulfur-rich liquid” containing “primarily iron, oxygen, and sulfur” “penetrated” into the steel.

The extremely high temperatures contradict the official story. Office and hydrocarbon fires burning in open air (~500° to 1,500° F) cannot reach temperatures in the range that iron or structural steel melts (2,700° F). This was even acknowledged by NIST’s Co-Project Leader, John Gross, in the same public talk where he stated regarding the phenomena of molten steel, “I know of absolutely nobody, no eyewitnesses that said so, nobody that’s produced it.” Yet there is abundant proof of the molten metal, which subsequent testsreveal to be iron, in the debris piles. Furthermore, NIST itself performed extensive fire tests to establish the temperatures reached by the WTC office and jet fuel fires. The temperatures established are far below the temperatures required to produce all of the above phenomena – which occurred both before and during the destruction and at Ground Zero.

The steel problem was “solved” by NIST by excluding most of the steel from being systematically examined for failure modes and heat excursions. The steel collected by the Port Authority, which has been stored in Hangar 17 at JFK Airport, was not included in the investigation except for 12 pieces. Of the 236 pieces that NIST possessed, many were excluded based on the circular argument that only columns from impact and fire floors were of interest in the investigation. Thus, NIST avoided having to discuss 51 of its 55 core columns. Sample 1 from FEMA’s Appendix C was also excluded.

In addition, NIST developed a new method of “visual examination” that it then substituted in place of the systematically used tool. NIST’s “paint cracking” method has the following “advantages”: paint cracks can be produced not only by high temperature excursions, but also by  “corrosion”/ “environmental degradation” and by plastic deformation; many columns had no paint left for examination, Moreover, by relying on a method that requires microscopic examination, NIST was able to ignore pieces that were obviously heat-affected but had come from non-fire floors. A contractor’s report that employed common visual examination was “reviewed”: NIST contrasted the contractor’s results with their newly developed method and their fire exposure observations, and by employing again a circular argument. NIST’s steel “examination” shows that its “working hypothesis” was in fact its premise, and that NIST gone to great lengths to maintain this premise.

Some want to cite “natural thermite reactions” for the high-temperature phenomena: airplane aluminum must have reacted with rust. This possibility can be ruled out based on the findings of a study that was conducted in 2002 at the Colorado School of Mines for the Minerals Management Service. Officially, the study, whose lead author is a close research associate of T. W. Siewert of NIST, is about thermite-sparking in offshore environments. But due to a very odd study design the question about the feasibility of natural thermite reactions in the WTC is answered too. The authors established the ignition temperatures for rust, dehydrated rust and iron-oxide-based thermite reactions. The necessary temperatures are so high that one can conclude that thermite reactions between airplane aluminum and rust (some rust was on beams according to documents), dehydrated rust (rust dehydrates in fire) or iron oxide (iron oxide was part of the primary paint) were not feasible in the WTC. Also tested was what happens when aluminum impacts rust at very high velocity, so, interestingly, even the possibility that the impacting airplanes caused natural thermite reactions can be ruled out.

The overwhelming evidence of these extremely high temperatures, which normal office fires and jet fuel cannot produce, cries out for a new investigation. The hypothesis of explosive controlled demolition must be examined and, if confirmed, followed wherever it leads, so that Americans can know for sure what was the real cause of the catastrophic loss of life at the WTC on 9/11 and the identities of everyone who was responsible for it.