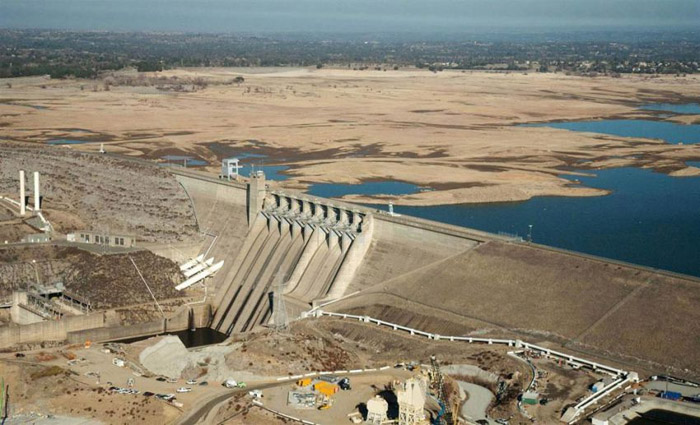 If hot thermometers actually exploded like they do in cartoons, there would be a lot of mercury to clean up in California right now.

The California heat this year is like nothing ever seen, with records that go back to 1895. The chart below shows average year-to-date temperatures in the state from January through July for each year. The orange line shows the trend rising 0.2 degrees Fahrenheit per decade.

The sharp spike on the far right of the chart is the unbearable heat of 2014. That’s not just a new record; it’s a chart-busting 1.4 degrees higher than the previous record. It’s an exclamation point at the end of a long declarative sentence.

The high temperatures have contributed to one of the worst droughts in California’s history. The water reserves in the state’s topsoil and subsoil are nearly depleted, and 70 percent of the state’s pastures are rated “very poor to poor,” according to the USDA. By one measure, which takes into account both rainfall and heat, this is the worst drought ever. (See the chart below.)

While the temperatures are extreme, they’re not entirely unexpected. The orange trend line above is consistent with rising temperatures across the globe. Average surface temperatures on Earth have warmed roughly 1.4 degrees Fahrenheit since 1880, according to NASA. The eastern half of the U.S. has had an unusually cool 2014, but it’s a lone exception compared to the rest of the planet.

The International Panel on Climate Change, which includes more than 1,300 scientists, forecasts temperatures to rise 2.5 to 10 degrees Fahrenheit over the next century. That puts California’s record heat well within the range of what’s to come, turning this “hot weather” into, simply, “weather.”

SPEI is a drought measure that includes both rainfall and the effects of heat. Higher temperatures increase the amount of water reserves lost through evaporation and plant transpiration. Source: National Climatic Data Center