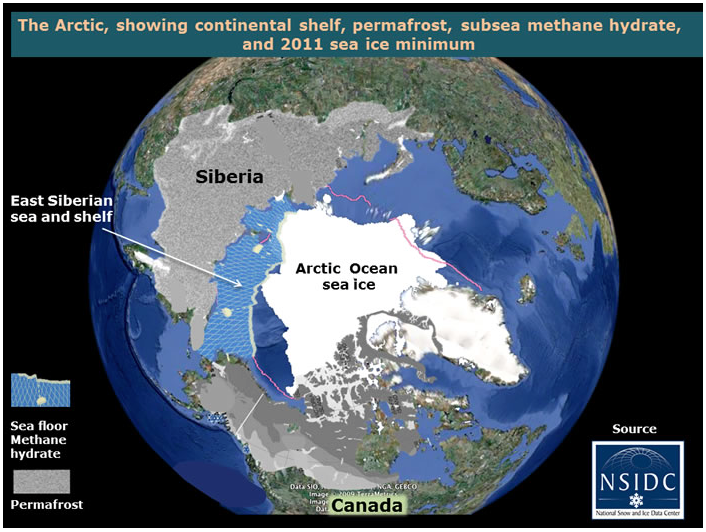 The Arctic methane potential is a global warming carbon bomb

The Arctic methane potential is a global warming carbon bomb (as has been
recognised for many years).

Previous estimates of Arctic carbon have doubled making the Arctic the site of 40% of all the planet’s carbon.

Latest research finds the Arctic is already a substantial source of methane to the
atmosphere:  50 million metric tons of methane is released per year from theEast Siberian Arctric shelf alone.

Arctic methane emissions are increasing as the Arctic warms several times faster than the rest of our planet.

There are three huge reservoirs of Arctic methane till recently safely controlled
by the Arctic freezing cold environment. They are now all releasing additional
methane to the atmosphere as the Arctic rapidly warms (carbon feedback).

The more the temperature increases and the longer the Arctic warms the more
methane these sources will emit. That much is certain.

The most catastrophically dangerous methane source is Arctic sea floor
methane hydrate. This is frozen solid methane gas under pressure in sea floor
sediments. The largest source of Arctic methane hydrate is the East Siberian
Arctic shelf (ESAS) , the largest continental shelf in the world. Methane is now
venting to the atmosphere from under the shelf. All the evidence indicates that
an abrupt massive release of methane gas from Arctic hydrates could happen
which most likely would be catastrophe to the global climate and our planet.

The next great immediate danger are the vast regions of Arctic and subarctic
wetlands. These are peat lands that hold the most carbon of any of the
world’s soils. They naturally emit some methane but as they warm they put out
more methane. They can respond rapidly to a jump in Arctic warming putting out much
more methane.

The third huge methane source is the vast regions of permafrost. As the world
warms the permafrost is thawing and is emitting methane. Permafrost can’t
respond very rapidly to a jump in warming but its thawing at some point becomes
irreversible.

A 2010 review of the Arctic carbon budget by D. McGuire et al finds that the
Arctic contains several times the amount of carbon in the atmosphere. Most is
potentially methane. The review finds many Arctic changes that will result from
global warming will increase the emission of Arctic methane.

The East Siberian Arctic Shelf holds over 90% of Arctic methane hydrate, which
is estimated by N Shakhova at double atmospheric carbon.

The subArctic Boreal forest is the largest forest store of carbon, even more than
the Amazon. Boreal forest fires emit mainly CO2 but some CH4 is also emitted. In forested
regions over permafrost the fire thaws surface permafrost and more methane is
released.

Atmospheric methane increased two and a half times with industrialization and
then leveled off at year 2000. Since 2007 it has been on the rise again, but this
time scientists say the increased emissions are from the surface of the planet
— a carbon feedback due to global warming.

This feedback atmopsheric increase is sustained and in the Arctic has reached a level of1900 ppb.

Satellite data shows that in 2009 and in 2011-2012 Northern Hemisphere methane was increasing fastest with  the eastern Arctic Ocean a significant methane emitter after 2009. In October 2011, the maximal methane concentrations were  found over the East Siberian Arctic shelf.

Dr. Ed Dlugokencky (methane monitoring head for the US federal government) said in a December 2011 interview that if the recent increase had been coming solely from the Arctic, he was fairly certain that science would have detected that by comparing measurements from the Northern and Southern Hemispheres.

In 2007, excess rainfall in the tropics and excess warmth in the Arctic may have led to higher methane emissions from wetlands in both regions, and the excess tropical emissions probably continued into 2008. The methane level of the atmosphere kept rising in 2009, but the reason it did that year is a bit of a mystery. In 2010, excessive rainfall in the tropics may again have been a culprit.