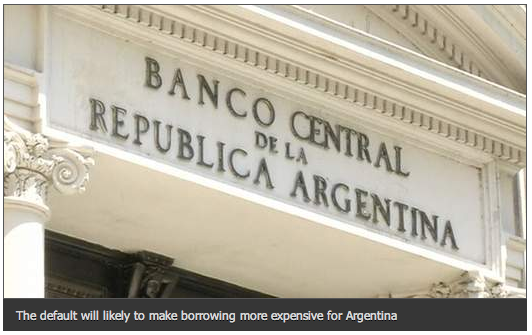 The failure of negotiations between Argentina and two hedge funds has seen the country default on its debts for the second time in 13 years.

The funds – NML Capital and Aurelius Capital Management – had refused to accept a reduction in what they were owed, preventing a deal being struck.

They had spent the last two days locked in talks in New York with a US court-appointed mediator as they sought a compromise, but a deal was not reached by a Wednesday midnight deadline.

On Thursday morning, the Argentinean cabinet chief said the mediator was “incompetent” and the government had no role to play in the debt talks.

The official also said Argentina was not in technical default and preparing to take the issue to international proceedings in The Hague.

Argentina’s economy minister Axel Kicillof held firm to his government’s position that it could not accept a deal with hedge fund creditors it described as “vultures.”

The country previously said it wanted to pay the second group an agreed amount but an American judge blocked the payment unless it also paid the two US hedge funds the full amount it owes them at the same time.

President Cristina Fernandez de Kirchner had long refused to negotiate with hedge funds because of how they treated the country after the last major default.

Court-appointed mediator Daniel Pollack said a default could hurt bondholders who were not part of the dispute as well as Argentina’s economy, which is suffering through a recession, a shortage of dollars and one of the world’s highest inflation rates.

“The full consequences of default are not predictable, but they are certainly not positive,” Mr Pollack said.

Mr Kicillof was described as being furious, and said the money was available but had been frozen as a result of the court order by US District Judge Thomas Griesa.

“Who believes in the ratings agencies? Who thinks they are impartial referees of the financial system?” he said.

“Argentina paid. It has money. It is going to continue to pay. The one who is responsible for this situation is Judge Griesa.”

President Fernandez also described the hedge fund creditors, often calling them “vultures” for picking on the carcass of the country’s record $100bn (£60bn) default in 2001.

There was no immediate reaction from the hedge funds.

Analysts said a default would deepen the economic malaise gripping Argentina which has resulted in soaring inflation and increased unemployment.

Its 2001 default, the largest in history at the time, plunged Argentina into an economic and social crisis that it is still battling to overcome.

The default may increase pressure on Ms Kirchner to seek political and economic solutions to Argentina’s problems, in a region where the country is in dispute with the UK over the ownership of the Falkland Islands.

The cabinet chief said the government would keep existing policies in place to stimulate the economy.