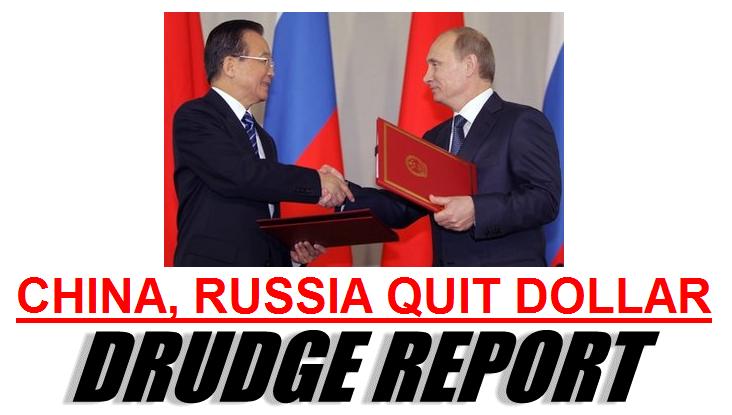 With the CIA-coordinated coup d’état executed in Kiev came the very real prospect of a World War III. However, the much greater war is not being waged on the urban battlefields of Eastern Ukraine or on the Russian border; rather, it’s being prosecuted in various national economies and by the world’s largest central and commercial banks, transnational corporations and market exchanges.  What is at stake is the very future and viability of the US Petrodollar as the reserve currency of the planet.

Apparently the US-UK-EU Axis planned this entire misguided venture in the Ukraine with the expectation that Russia would just go with the flow.  They also misjudged the degree to which the rest of the world would respond to the Anglo-American sponsored aggression in the Ukraine.  This gross error in judgement has not only seen the Crimea annexed by Russia, it has also triggered a globel backlash which now seriously threatens the US dollar.

How could the controllers in Washington (and NYC) and London have been so clueless as to the profound and pervasive repercussions, should their foolish scheme fall apart?  Did they not plan for the most consequential contingencies?  Whether they did or not, their whole fiasco in the Ukraine reveals a level of sheer desperation rarely seen in international affairs.  Especially one with such significant and seeping global impact.

The only reasons for the US and EU to incite the civil war in the Ukraine was to divert attention from their internal affairs, as well as throw a lifeline to the fast-sinking EU ship.  The US oil and gas companies also have a large stake in the energy markets, resources and conduits spread across the Ukrainian countryside.  However, it is the critically strategic geopolitical location and size of the Ukraine which made it an irresistible target for the Anglo-American Axis.

For more than two centuries the UK and US have sought to isolate Russia on the global geopolitical chessboard.  As the Russians move closer to the East Asian economic orbit and closely collaborate with China, a perceived threat appeared on the horizons of the Western powers.  These and other more clandestine reasons have compelled the Anglo-Amercian Axis to literally sign their own death warrant, such was the folly of angering the Russian bear.  In so doing they will also bring economic and/or financial ruin to their surrogates throughout the European Union and elsewhere.

At the end of the day, Russia will do whatever it has to do, even this —>

This headline appeared on an alternative website recently.  What follows should give concern to every nation which has hitched its wagon to the the US dollar wagon train.  It doesn’t get more serious than this, for those who wonder about the stability of the US economy, the security of the US dollar, and all the far-reaching ramifications therein.  The excerpt below has been taken from the original article[2] upon which the headline was based.

This stunning reprisal by Russia is unique for both its candor and conviction.  Rarely does Russia telegraph their intentions concerning such consequential moves while ‘playing’ The Great Game.  The only deduction, then, is that the BRICS Alliance considers their ongoing Bretton Woods-dissolving enterprise a fait accompli.  Furthermore, that the Anglo-American Axis has left Vladimir Putin with no alternatives but to crash the petrodollar, once and for all.

Russia knows that it is facing serious existential threats now that the eastern borders of the Ukraine have been closed, thereby creating the 21st century’s version of the Iron Curtain[3].  Nevertheless, as difficult as this precarious predicament appears to be concerning Russian sovereignty, Putin is quite aware that destiny is on Russia’s side.  He may even be aware of the old adage:

The economic bloc of nations (per the Bretton Woods Agreement) which currently supports the US dollar in order to keep it articially propped up can no longer carry their respective weights. Since 2008 the unrelenting economic pressures and financial stresses have been too much to bear, particularly for the beleaguered members of the European Union. Therefore, the US can no longer count on the traditional allegiance from Europe.

The EU is also not too keen about a major civil war being fought on its fringes, especially when it is only America which seems to gain from the unrealistically anticipated economic jumpstart that only war can produce.  Two world wars were more than enough for Europe to suffer. The current economic/financial WWIII that is shaping up does not hold any promise for them either. Therefore, the real question is whether any of the main actors in the EU will jump ship as suggested in the article that follows:

JAPAN, SAUDIS, & GERMANY WILL TURN AGAINST US, JOIN RUSSIAN ALLIANCE!

Truly, only those whose market speculation is banking on the collapse of the US dollar as the world’s reserve currency will be served by this unfolding catastrophe engineered by the US-UK-EU juggernaut in the Ukraine.  Hopefully, those responsible for such an unmitigated political and economic disaster will soon see the error of their ways and abandon the whole harebrained scheme[5].  Playing with the natural gas networks that snake their way through the Ukraine and Europe is like watching a lit fuse burn a trail to a massive tinderbox — right in the middle of Europe!

On the other hand, toppling the once Almighty Dollar may just be the only way to terminate — with finality — the state-sponsored terrorism systematically perpetrated by the Wester Powers wherever they seek control of land, natural resources and/or energy conduits.  Or, wherever they pursue strategic geopolitical dominance as has been repeatedly articulated by one of President Obama’s foreign affairs mentors, the inveterate Cold Warrior – Zbigniew Brzezinski.

[4] Well before the fall of the Soviet Union in 1991, it had been predicted that the fates and fortunes of both the USA and USSR were uniquely intertwined.  Especially that both superpowers would one day suffer the same fate that every empire eventually succumbs to.  Once the USSR collapsed under the weight of grossly inefficient and godless communism, so, to0, would the USA follow upon the crashing and burning of obscenely corrupt predatory capitalism.

[5] Playing with the natural gas networks that snake their way through the Ukraine and Europe is like watching a lit fuse burn a trail to a massive tinderbox — right in the middle of Europe!

Russia Is Abandoning The US Dollar

Russia Is Doing It – Russia Is Actually Abandoning The Dollar

All Four Wheels Come Off The Anglo-American Juggernaut