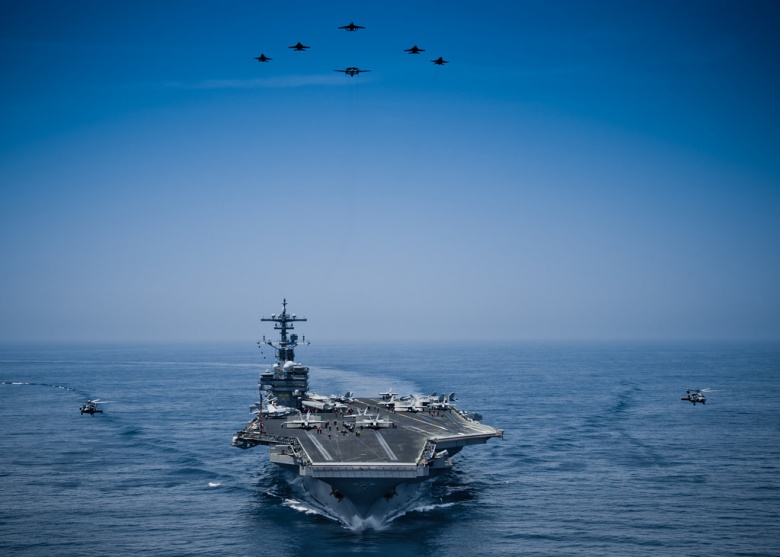 Just when we thought US foreign policy couldn’t sink to new lows, it does just that.  Recall yesterday‘s less than veiled threat by China president Xi Jinping Xi called for greater military communication with the U.S., adding that “A conflict between China and United States will definitely be a disaster for the two countries and the world. As long as we uphold mutual respect, maintain strategic patience and remain unperturbed by individual incidents and comments, we’ll be able to keep relations on a firm footing despite ups and downs that may come our way.” So what does the US do? Nothing short of taking a machete and poking the Dragon in the mouth.

In other words, the US is doing precisely what China warned not to do, and what according to the Chinese president would lead to “disaster for the two countries.” Because clearly there is nothing a superpower in decline wants to do more than to antagonize its ascendent replacement, and all the other countries like Russia, France and Germany that are gravitating toward its power.

Apparently, the “rethink” comes in the wake of the series of low-level incursions China has used to shift the status quo in one of the vital waterways of the global economy.

So how will the US “escalate” its presence in China without doing its usual bull in a, pardon the pun, China shop routine? That appears to be the problem:

The challenge for the US military is to find tactics to deter these small-scale Chinese moves without escalating particular disputes into a broader military conflict. Every year, $5,300bn of goods cross the South China Sea by ship.

The growing tensions in the South China Sea, which include disputes between China and Vietnam and the Philippines, cast a shadow over the annual meeting between senior US and Chinese officials, known as the Strategic and Economic Dialogue, which started in Beijing on Wednesday.

The US delegation, led by secretary of state John Kerry and Treasury secretary Jack Lew, face the delicate task of trying to shore up an increasingly fragile relationship with Beijing, while laying out American concerns about Chinese maritime expansionism and cyber theft. For their part, the Chinese are irked by US moves to prosecute Chinese military officials over alleged cyber-hacking and by American alliances in Asia which Beijing views as a form of containment.

Apparently the lightbulb moment came when the US “hinted” to China that it has drones. Because China didn’t know that already.

One element of the emerging US strategy was evident in March when the US flew P-8A surveillance planes over the Second Thomas Shoal, an uninhabited atoll in the South China Sea. Chinese ships there were trying to prevent the Philippines from supplying marines who were trying to get essential supplies to a ship that in 1999 was deliberately run aground on a land-feature claimed by both countries. The US planes flew at low altitude to make sure they were visible to the Chinese.

“This is a new dynamic,” said a former Pentagon official familiar with the operation. “The message is, ‘we know what you are doing, your actions will have consequences and that we have the capacity and the will and we are here’.”

A spokesman for the US military’s Pacific Command said that “we do routine operations in these waters and airspace on a regular basis”.

More extensive use of surveillance aircraft in the region could be coupled with a greater willingness to publicise images or videos of Chinese maritime activity. Some US officials believe the Chinese might be given pause for thought if images of their vessels harassing Vietnamese or Filipino fishermen were to be broadcast.

Really? That’s what some US officials think? It never crossed their minds that China actually would love to have its expansive ambitions publicized for the whole world to see, in what following Russia’s annexation of Crimea is nothing short of clear defiance of a hegemon that virtually everyone is now mocking – from Russia to France to Germany, and of course, China.

In the meantime, as if it was possible, more humiliation is coming Obama’s way:

The Obama administration declared South China Sea a US “national interest” in 2010. Since then it has watched China take effective control in 2012 of Scarborough Shoal, 120 nautical miles west of the Philippines’ main island, Luzon. As well as the altercation at the Second Thomas Shoal this year, Manila has accused Beijing of reclaiming land for a runway in a disputed area while China has also placed an oil rig in waters also claimed by Vietnam. Despite Chinese complaints, the US has long conducted aerial surveillance in the region, although the use of its new generation of P-8A planes in contested areas represents an intensification of the activity.

At least one person is not an idiot:

Bonnie Glaser, an Asia expert at the Center for Strategic and International Studies, said that the surveillance flights showed that the US “has an interest in peaceful resolution of these disputes and opposes China’s coercion”. However, she added: “I’m sceptical such flights will deter Chinese behaviour.”

Good, because they won’t. If anything, next China will declare Baja California a “national interest” and start flying its own suerveillance drones over the US. It would be very curious to see just how the US responds to that particular inevitable escalation.