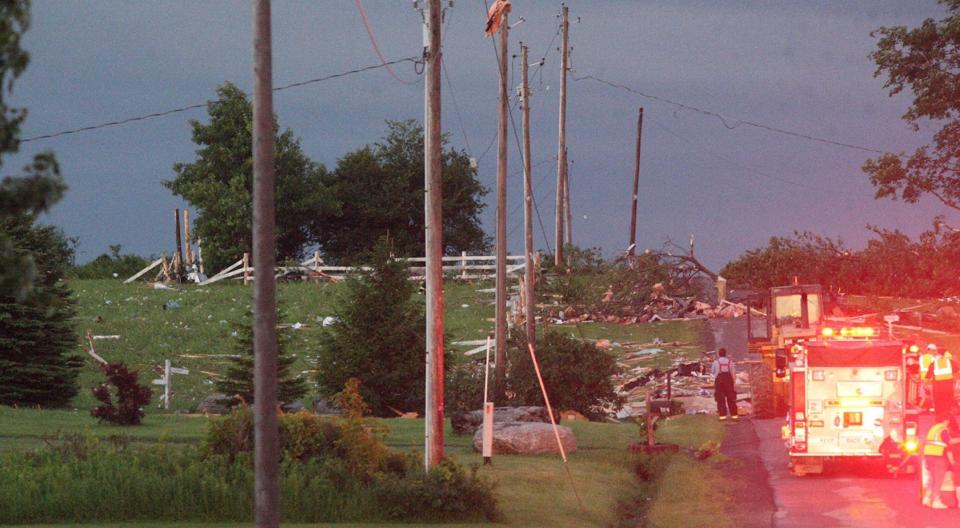 SMITHFIELD, N.Y. (AP) — Officials in central New York said four people are dead and four homes have been destroyed in building collapses amid severe thunderstorms that rolled through the region.

A spokesman for the Madison County emergency management office said the deaths were reported just after 7 p.m. Tuesday in the hard-hit community of Smithfield, located between Syracuse and Utica. No further details were immediately available.

Madison County Sheriff Allen Riley did not identify the victims. He told The Post-Standard he was still notifying their families.

The storm destroyed four homes, ripping one from its foundation and tossing it onto another house, the newspaper reported. Three other houses nearby also were damaged.

Riley said in a television interview that the rubble at the Smithfield site was being searched and that neighbors were being interviewed.

“We got our search dogs out right now looking around,” he said. “We’re just picking up parts of the house to see if anybody is underneath them.”

Riley said he plans to talk more about the storm damage and deaths at a news conference Wednesday morning.

National Weather Service meteorologist Joanne LaBounty said investigators will be in the area to determine if a tornado touched down.

The spokesman for the emergency management office said there was widespread damage in the towns of Sullivan and Lenox, between Syracuse and Utica.