Argentina has blamed the US for its debt default, calling the mediator in failed talks “incompetent”.

Cabinet Chief Jorge Capitanich said his country was considering opening proceedings at international tribunals in The Hague after it was declared to be in technical default.

The announcement came just hours after last-minute talks in New York with a group of bond-holders failed.

The investors are US hedge funds that bought debt cheaply after Argentina’s economic crisis in 2001-2002.

They are also known as “hold-outs” because they did not sign up to a restructuring of debt which the majority of bond-holders agreed to in 2005 and 2010.

Under that deal, investors agreed to settle for about a third of what they were originally owed.

However, hedge funds NML and Aurelius Capital Management bought up a large chunk of the remaining distressed debt at low prices.

They demand to be paid the full face value of their holding.

Mr Capitanich said Argentina would denounce the “vulture funds” before the International Court of Justice at The Hague and the United Nations General Assembly. 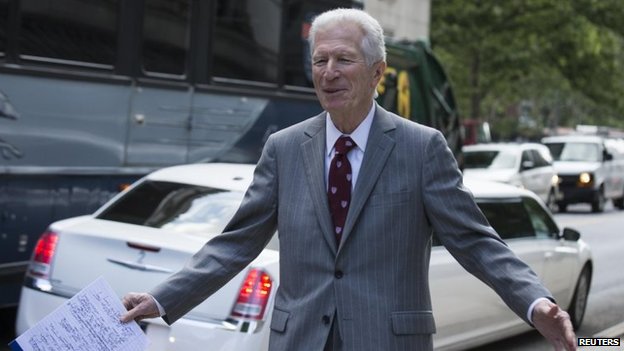 He said the US was to blame for its “shameful” handling of the funds’ case against Argentina.

Not much has changed on the streets of Buenos Aires. Life carries on as usual. The fact is that people here are already facing high inflation – day-to-day life has been getting harder in the past few years.

January saw the peso devalued by 20%. So the feeling here is that it’s bad already, it will just continue on a downwards path.

For those who are angry, some of that anger is directed at these so-called vulture funds and they say Argentina needs to fight back.

But there are those frustrated by the way the government has handled the crisis. As one person told me outside the Casa Rosada, the president’s office, the vultures live there too.

“The responsibility lies with a state, that of the United States of America,” he said in a news conference at the presidential palace.

Mr Capitanich accused the US of “not acting in an adequate manner”.

The Argentine government had expected the dispute to go all the way to the US Supreme Court, which would have bought the country more time.

But in June, the Supreme Court declined to hear Argentina’s appeal against the decision of a lower court that made it liable for the money.

Under that court’s ruling, Argentina cannot use the US financial system to keep paying the restructured bondholders unless it also pays the “vulture funds”, placing it in technical default.

However, Mr Capitanich denied the country was in default at all, arguing that it has the money to pay the interest that became due to the restructured bondholders on 30 June but that it was barred from doing so by the court’s ruling. 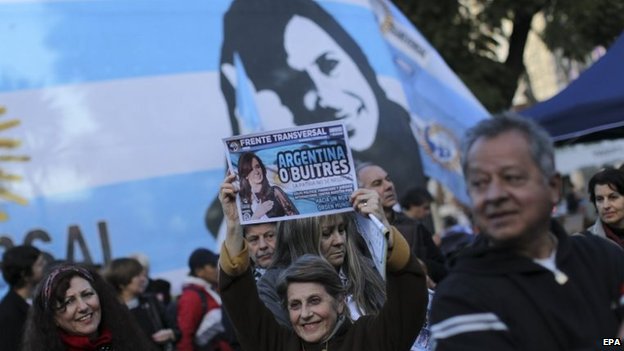 Feeling against the “vulture funds” runs high in Argentina

He suggested that holders of its performing debt demand their money from the US judge who blocked the 30 June interest payment.

Mr Capitanich also suggested one way out of the impasse would be for a third party to buy out the hold-out investors.

He said that move would allow them to side-step a clause that was seen as a major stumbling block on the way to a deal.

The clause, known as Rufo (rights on future offers) states that Argentina cannot favour the hold-outs over those who accepted the restructuring deals.

He also said that in the meantime Argentina would maintain its policies to stimulate the economy.