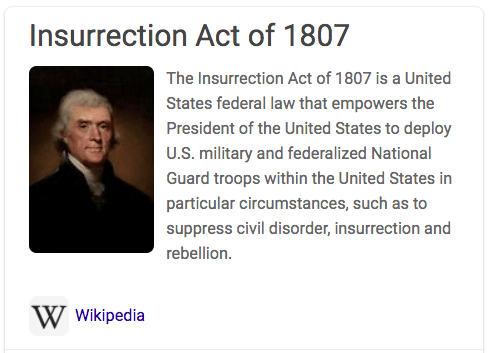 The Democrat insurrectionists have acted treasonously throughout the 2020 election cycle.

The seditious Deep State has fully supported this ongoing insurrection.

The U.S. Intelligence Community has closely collaborated with the Democrat Party.

The Mainstream Media has both facilitated and covered up the insurrection.

Big Tech and Big Social Media have colluded with all of these bad actors.

The DoJ, FBI and C.I.A. are the three primary institutional pillars abetting and protecting the insurrectionists.

Of course, the U.S. Supreme Court is also a major player which has enabled the insurrection to occur under a cloak of judicial protection. See: The U.S. Supreme Court Is Now Complicit in the International Criminal Conspiracy to Steal the 2020 Election and Overthrow the POTUS

The international banksters such as the Rothschilds and Rockefellers have funded the insurrection.

International criminals and color revolutionists such as bagman George Soros openly flout U.S. federal law and proclaimed their intentions to overthrow the POTUS.

Democrat governors and mayors commit crimes against their states and the nation through their criminal acts of commission and omission which have aided the insurrectionists.

U.S. Congressional Democrat leadership has trampled on law and order to cultivate a nationwide environment of lawlessness and anarchy so that the insurrection can take place without response.

All the while, the New World Order globalist cabal uses America’s enemies, both foreign and domestic, to sow seeds of chaos, conflict and confusion throughout every sphere of life to assist the brazen insurrection.

Likewise, cultural marxists have greatly accelerated the irreparable tearing of the fabric of American society to create an atmosphere of turmoil and tumult, instability and turbulence.

In light of these and many other deliberate acts to destabilize the United States of America, President Trump possesses the legal authority to invoke the Insurrection Act.

At this late date, the invocation of the Insurrection Act remains the only viable way to save the American Republic from a full-blown communist takeover by the Left.

Clearly, imposters Joe Biden and Kamala Harris were only selected by the globalist masters to oversee as mere puppets the planned bolshevik revolution.

Such a surreptitious color revolution will proceed swiftly under an illegitimate Biden presidency.  It will be morphed into a full-scale civil war should the bolshevik revolutionary phase not achieve the complete takeover of the U.S. Federal Government and civil society.

KEY POINT:  It’s never been so imperative for the Patriot Movement to understand the parallels between the 1917 Bolshevik Revolution / 1918 Spanish Flu Pandemic scheme & the 2020 Coronavirus Pandemic / Democrat’s Communist Revolution.  This HUGE story is — by far — the most important for every American to properly comprehend before the communist overthrow is completed. (See: The Democrat-Run COMMUNIST TAKEOVER PLOT Is About Ready To Go Prime Time)

Furthermore, folks need to become aware of the fact that THE GREAT SCAMDEMIC, THE GREAT RESET and THE GREAT STEALECTION were all carried out in the same year with highly purposeful design.  Perhaps the primary goal of these extremely disruptive events is the ultimate collapse of the American Republic.

The communist-run Democrat Party has been used for decades to execute a slow-motion controlled demolition of the 50 states, so now their NWO plan is nearly complete.  Therefore, it’s of paramount importance for president Trump to act decisively and expeditiously.  Which translates to the immediate invocation of the Insurrection Act.

Just an FYI for the Patriot Movement that the POTUS can secretly invoke the Insurrection Act and be ready to spring into action when the communist insurrectionists least expect it.

Hence, it’s vital that every Patriot be prepared, be locked and loaded, and be ready to support the President in the event of a violent communist insurgency.  The sanctuary cities and blue states are already firmly controlled by Democrat traitors, so that’s where conservatives really need to be on guard.

KEY POINT: Electoral insurrection is every bit as effective and dangerous as a violent insurrection. See: 2020 Election Theft is Nothing Short of a Soft Coup and Electoral Insurrection—But by who exactly?

Multiple Layers of the Counter-insurgency Plan

There are several essential governmental initiatives that Team Trump has been clandestinely planning.  Each of these endeavors is critical to the success of foiling the Democrat’s insurrection.  For example: Imposter Joe Biden Must Be Arrested, Prosecuted and Incarcerated for the Good of the Republic.

The Insurrection Act provides for every single major organ of the Mainstream Media to be shut down or taken over just as the C.I.A. does in every banana republic undergoing one of their color revolutions.  Whoever controls the media totally controls the country as Patriots have seen since Trump first declared in June of 2015.  And, as conservatives across the USA have felt since the very beginning of the manufactured Covid Plandemic.

More importantly, the FBI must be closed down, the CIA forever dissolved and the DoJ shuttered until the subversive communists can be frogmarched out of the Robert F. Kennedy Department of Justice Building.

For that matter, the entire US Intel Community will have to be majorly overhauled post-haste if there is to be any semblance of law and order in America in 2021 and beyond.  Because there are so many protected SES employees populating these most dangerous Deep State entities, they will all need to be purged before they are cunningly used to override Trump’s Insurrection Act implementation plans.

Similarly, there are many entities throughout Corporate America that will have to be suspended until their treasonous leadership can be removed.  Many of those corporate entities will have to be nationalized temporarily until they can prove they will no longer function as enemies of the American people.

Bottom Line: There is no stopping the POTUS from using the Insurrection Act during these profoundly perilous times.  The National Guard will be utilized as never before to maintain law and order wherever Democrats now operate with intentional lawlessness and utter impunity.  Most significantly, activated state militias will be necessary to ensure local communities are not taken over by so many communist petty tyrants and Democrat despots.  Every righteous Oathkeeper, military veteran, hunter and gun owner ought to be prepared to enlist in the local militia.  BLM mercenaries, AntiFa terrorists, OFA revolutionaries and Sunrise insurrectionists abound across the land.  They must be treated with extreme caution and overwhelming force whenever necessary.

January 6th of 2021 will undoubtedly present a crucial and defining moment for President Trump.  Therefore, it’s quite urgent for each and every Patriot to galvanize their U.S. Senators and House Members to protest the stolen election like there’s no tomorrow.  The more courageous the congressional outcry and dissent surrounding the Democrat’s epic election theft, the more power is conferred upon the POTUS to reverse the falsely declared outcome BY ANY MEANS NECESSARY AND BY EVERY MEANS POSSIBLE.

Source: “President Trump Must Take Out ALL Traitors With One Strike”

Why this pivotal approach is so urgent and integral to the success of invoking the Insurrection Act is due to the following stark reality:

Perhaps most significantly, the swift application of the Insurrection Act is clearly the single best way for the country to avoid a bloody and protracted civil war.