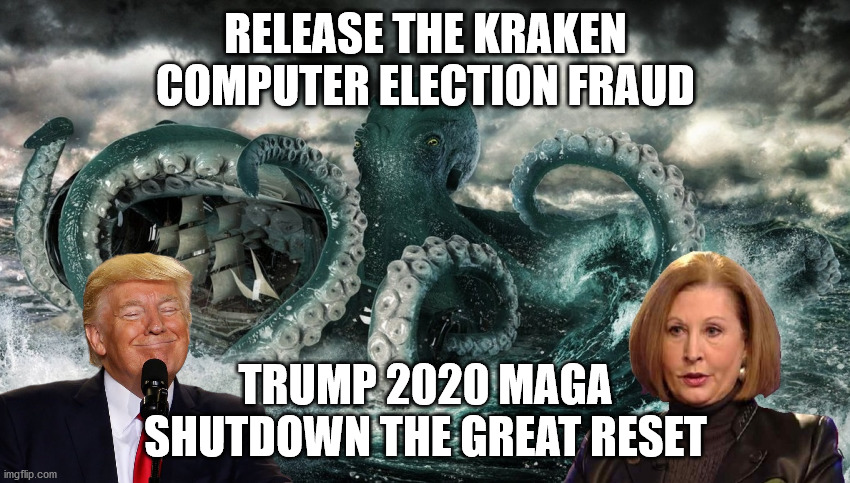 “Releasing the Kraken”
Spells the Demise
of the Democrat Party

“Without an iota of hyperbole, what the Democrats just did was totally expose their most brazen election theft ever.  They didn’t even try to cover it up.  They left evidence everywhere.  There’s never been such an ambitious scheme to steal a landslide victory from the opponent—NEVER!  And they don’t seem to care that Team Trump has got them all dead to rights.  They’re completely clueless about how the strength of the evidence and amount of damning proof will indict many.  When the hard evidence is seen by the American people, they will demand the Democrat Party be shut down.  Really, did the Democrats do this transparent steal ON PURPOSE?!?!”

Very few folks really understand what has happened throughout the 2020 election cycle.

A monumental sea change took place that has enabled President Trump to expose the Democrat Party as the International Crime Syndicate — RICO-level —- that it truly is.

Because of the massive amount of evidence documenting so many crime sprees and confirming so much naked governmental corruption perpetrated by the Democrats and their RINO co-conspirators, President Trump has every power and authority to initiate the dissolution of the Democrat party.

In point of fact, the vast storehouse of proof substantiating sedition and treason at the highest echelons of American government is enough to carry out the process of terminating the Democrat Party forever.

Team Trump has had 4 long years to accumulate the most incriminating evidence of these  crimes committed against the American Republic and U.S. citizenry.

Now that the 2020 election crime wave has washed over the entire nation, the Democrats and their Deep State counterparts have been caught red-handed and IN BROAD DAYLIGHT.

More importantly, the Democrat traitors and their Deep State co-conspirators have unwittingly revealed their foreign masters within the New World Order globalist cabal.  As follows:

Meet Lord Malloch Brown: The British Hand
Behind The Coup To Oust Trump

Who knew that there was a kingpin that stood squarely behind the communist coup leader and Rothschild bagman George Soros?!

That the British were the primary instigators of the attempted 2016 POTUS election theft was kept extremely secret by the colluding Mainstream Media. See: The Bloody Brits Are Behind Election Rigging Worldwide

However, everything has changed in 2020.

Because the Democrats stealthily outsourced much of the vote fraud and election theft to a foreign power — the United Kingdom — this soft coup amounts to treason of the highest degree.  Of course, Israel also played a major part in the sophisticated cyber-crimes.

Now here’s the real good news: the direct involvement of the treacherous Mainstream Media has provided the necessary pretext for Trump to terminate each and every major organ of the corporate media.

You name them: CNN, MSNBC, ABC, CBS, FOX, NYT, WAPO, LAT, CT, BG … they are all guilty of executing one of the greatest cover-ups in media history.  There have been many other flagrant MSM betrayals such as OPERATION COVID-19, 9/11 and JFK, but those will be exposed after the USS ship of state has had the urgent course correction.

Because each of these MSM organs of propaganda and prevarication continues to cover up so many immense criminal conspiracies to this very day, they have incriminated themselves to the point of extinction.  Trump can now lawfully shut them all down—for good!.

Without the CIA’s Mockingbird Media repeating the lies and publishing so much fake news on an hourly basis, the countless conspiratorial criminal plots could never have been launched in the first place.  Hence, the MSM corporate officers can all be prosecuted to the fullest extent of the law when the indictments are handed down.

Similarly, the never-ending Democrat crime waves could never have taken place with such an inordinate degree of impunity unless the nation’s law enforcement agencies permitted them to occur.

Therefore, President Trump also has the necessary legal basis to suspend the operation of both the FBI and DoJ.

A long succession of FBI Directors and Attorneys General are quite obviously culpable for numerous instances of misprision of felony, criminal negligence, official misconduct, dereliction of duty, among many other high crimes and grave felonies.

Not only that, but the leadership of both the FBI and DoJ actively participated and/or collaborated in cover-ups of the various criminal schemes to overthrow the Trump administration.

How many times have former FBI and DoJ officials been identified as criminal co-conspirators in these plots to topple Trump?

The list of unindicted co-conspirators grows by the day as details of the various criminal activities are disclosed.

Because of the pervasiveness and profundity of the multifarious Democrat criminal enterprises enabled by federal law enforcement, the immediate suspension of operations of both the FBI and DoJ (and C.I.A.) has become a national imperative.

Let’s be clear about what has just taken place during this month of November across the USA.

The Democrat Party carried out the greatest election theft in history.  And, they did not even try to hide it because of their sheer desperation to win.

Because the DNC and Congressional Democrat leadership have been conned to believe that their unparalleled vote fraud cannot be proven in court, they continue to act as though Joe Biden really won. See: Joe Biden Did NOT Receive 79,685,131 Votes. It’s IMPOSSIBLE! Here’s why —

Not only did Biden not win, he lost by an overwhelming landslide.  The Democrats simply could not withstand the utter humiliation at the polls, so they continue to attempt to pull off the biggest election heist ever, complete with cover-up.

Also known as The Great Stealection, this astonishingly reckless series of ongoing crimes was ‘necessitated’ because of the genuine lead enjoyed by President Trump.  The perps were forced to steal an extraordinary number of votes which drove them to do very STUPID things.

This stark reality forced the DEMs to commit every type of vote fraud imaginable, as well as any kind of election theft they could think of and practically implement.  But there was very little thought given to their fingerprints left all over the myriad crime scenes.  The digital fingerprints, in particular, can never be erased.

The multitude of cover-ups throughout this election period, too, were quite amateur especially given how ubiquitous and serious the complex criminal endeavors are turning out to be in the battleground states.

KEY POINT: Historically, whoever wins Florida wins the POTUS election.  Well, Trump decisively won the Sunshine State.  He also won Ohio, another bellwether state.  Trump also handily won Pennsylvania, although it was clearly stolen from him.  The point being that all the trustworthy polling indicated that Trump would win all the swing states as explained here: A LANDSLIDE VICTORY FOR PRESIDENT TRUMP IS NOW GUARANTEED!

By their own gross misconduct, blatant malfeasance and serial transgressions of federal law, the Democrats have brought the curtain down on their own party.

They did it, not President Trump.  And they need to pay the price.

The first major cost of doing business in this way is for the DEMs to unconditionally completely surrender to the bedrock legal principle that says: “FRAUD VITIATES EVERYTHING”.

In light of this indisputable axiom, TRUMP HAS WON BY DEFAULT.

Which means the President can take back his mandate and begin to drain the swamp like there’s no tomorrow.  The most critical point being that if he does not apprehend the swamp creatures inside the Beltway, the next 4 years will be worse than the last four.

Just as importantly, Deep State needs to be exposed and then eradicated for all time.

Lastly, because the barbarians are inside the gate not merely at the gate, the NWO globalists need to be identified and removed from every position of power and influence post-haste.

Unless these initiatives are taken swiftly, the POTUS remains under very serious threat.  And, the fate of the Republic hangs in the balance as does the future of the American people.

The excellent, yet unreported, election status for Team Trump is that the Left has already provided so much hard evidence of wrongdoing it’s surely going to be a bloodbath in court.  So legitimately taking the reigns of power for Trump ought to be a cakewalk after the hostilities have stopped.

From this point forward, the Patriot Movement led by President Trump is on the right side of history.  But no one ever said the Left would go without a fight.  Therefore, stay prepared in case a show of force is required to maintain law and order locally and nationally.

Because the Right is certainly on the side of the truth and justice, victory will not elude the Patriot Movement in the end.  After all, the forces of good always triumph over the forces of evil at the close of each era.

The Democrat Party is definitely is over!