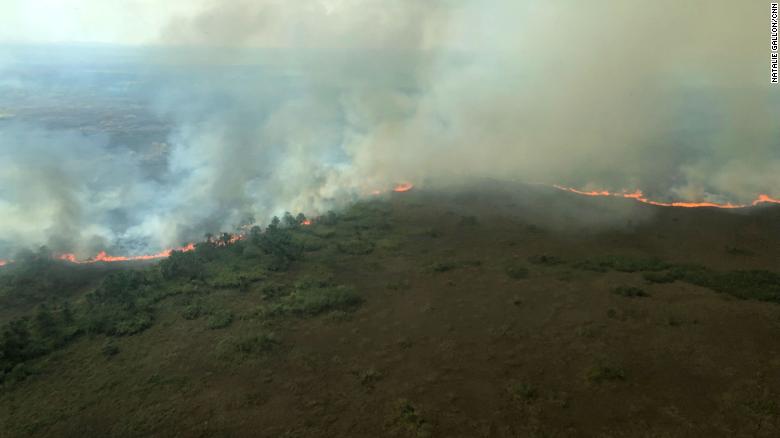 MSM photographer flies over the Amazon Rainforest to get an aerial view of the devastating fires currently ravaging the region.

Everything points to the fact that the Amazon fires were quite deliberately set by the New World Order globalist cabal. Their geoengineers can fabricate the perfect conditions for out-of-control wildfires to be triggered by strategically located arsonists on the ground or by their flame-throwing drones, as well as by other covert means.

That these highly suspicious fires jumped off right before the G7 Summit held in France indicates the carefully hidden NWO agenda. The globalists will create every opportunity to promote their utterly false narrative regarding the CO2-driven Global Warming hoax. This is their primary way to fear-monger the world into a new global governance paradigm until they figure out how to start the hot phase of World War III. Of course, their ultimate goal is the establishment of a One World Government.

That these Amazon arson fires became the central topic of the G7 meeting in France, in view of a Global Economic & Financial System that’s in a free-fall collapse, speaks volumes about the desperate attempts to keep the absurd Global Warming hoax alive. Yes, there is definitely climate change occurring worldwide, but it’s all being stealthily manipulated via chemical geoengineering and HAARP frequencies, the NEXRAD network of Doppler transmitters and moisture-producing power plants as well as by other geoengineering techniques and technologies. The perps did the very same thing when the geoengineers manufactured the apocalyptic California firestorms over this past decade. As follows;

“No one is debating that California has experienced its fair share of
natural wildfires over the decades, especially when the Santa Ana
winds are blowing. However, the last few years have seen a develop-
ing pattern of wildfires and firestorms that have a major manmade
component. First, the geoengineers artificially create the weather
patterns that push various parts of the state into dry spells and/or
full-blown drought conditions. Over the months the dried out
vegetation becomes kindling during the wildfire season. Now that
everyone knows that forest fires and brush fires start spontaneously
during the hot months, the geoengineers utilize fire-starting technolo-
gies that literally act as “flamethrowers” that “rain down fire from the
skies”. Of course, depending on their specific targets, the environmen-
tal terrorists will also employ arsonists strategically placed on the
ground.”

The same weather warfare by the same geoengineering terrorists was also utilized in Greece in 2018. Those “fires from nowhere” devastated highly populated areas of the country as never before. See: FALSE FLAG ATTACK: Greece Targeted With Geoengineered Wildfire Terrorism & DEW Attacks (Photos)

Only with this correct understanding can the criminally insane perps behind these Amazon fires be known and their nefarious agenda be exposed. Their overarching agenda is of course this:

Now here’s an MSM news report which clearly indicates that Brazil’s president is on to the globalist scheme of using the Amazon fires as a flaming CO2-driven advertisement for the Global Warming hoax: Amazon fires: Brazil to reject G7 aid after Bolsonaro rages at ‘colonialist’ leaders.

There were three primary reasons for the Amazon fires being transformed into a media conflagration. First and foremost, to distract the entire planetary civilization from the free-fall collapse of the Global Economic & Financial System. Just how serious is that concerning the future of the world? Distraction is the name of the game here.

Secondly, to inflame the global climate change debate and use the catastrophic fires to greatly amplify the Global Warming hoax, which it did. Even the Hollywood crowd was enlisted to endorse that the “lungs of the world” were being destroyed at a meteoric pace. “Global climate change” has morphed into a massive multi-billion dollar industry that the power elite must protect and advanced at all costs.

Lastly, the globalists are determined to bring every head of state under the New World Order umbrella. Using President Bolsonaro as an example of what will happen in the wake of non-compliance with the NWO agenda is what this particular G7 meeting provided. The nationalist and patriot and conservative leaders will no longer be permitted to step off the NWO reservation, even if it means burning down whole rainforests