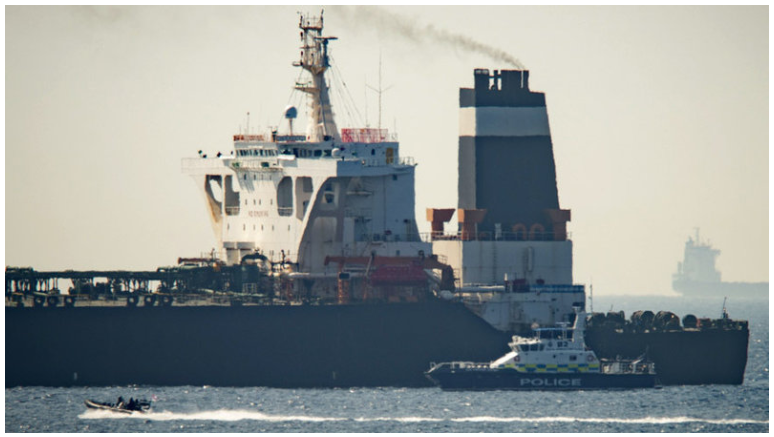 A Royal Marine patrol vessel is seen beside Iran’s Grace 1 tanker in the British territory of Gibraltar on July 4. The tanker was impounded, and now the U.S. Department of Justice has applied to seize it, according to Gibraltar.
Marcos Moreno/AP

The U.S. government has applied to take possession of the Grace 1, an Iranian oil tanker that was detained last month by the British, according to the Gibraltar government.

“The U.S. Department of Justice has applied to seize the Grace 1 on a number of allegations which are now being considered,” a spokesperson with Gibraltar’s government told NPR on Thursday.

The official said the case will return to the Supreme Court of Gibraltar at 4 p.m. local time (10 a.m. ET).

The Gibraltar Chronicle reported that the U.S. application came just hours before the government was scheduled to release the tanker. It also reported that the Grace 1’s captain and three officers were released from arrest in a separate development.

The U.S. Department of Justice did not immediately respond to NPR’s request for comment.

Grace 1 was raided in waters off the coast of Gibraltar, a British territory, by Britain’s Royal Marines on July 4. The tanker was impounded on suspicion of transporting oil to Syria — a breach of international sanctions against Syrian President Bashar Assad’s regime.

The seizures this summer have escalated relations between the West and Tehran. Tensions had already run high since President Trump’s withdrawal from the 2015 Iran nuclear deal.

Under the agreement, Iran said it would curb its nuclear programs in exchange for the U.S. easing of sanctions. The Trump administration has since imposed new economic sanctions on Iran and Iran said it has begun to enrich uranium above the levels established in the agreement.