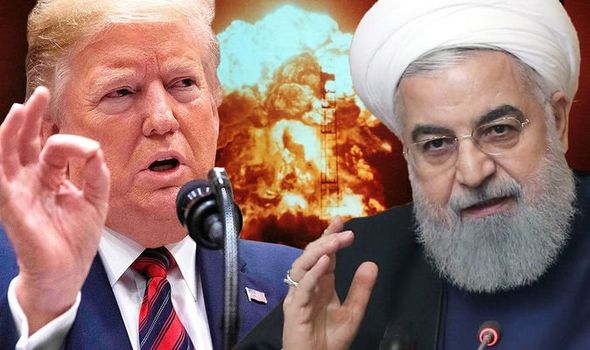 The ‘Peacemaking’ POTUS Morphs Into a Warmongering Psychopath

President Trump has put all his cards on the table.  There’s no longer any question that he’s nothing but a zealous cheerleader for the Military-Industrial Complex.  And, that his primary mission is to Make Israel Great Again (MIGA).

The series of transparently staged events concerning Iran during the month of June clearly proves that Trump works for Israel and takes direction from Prime Minster Benjamin Netanyahu.   His willingness to invade a sovereign nation that was falsely accused of bombings “in the Gulfs”, which were actually carried out by the U.S and Israel, reveals a POTUS who no longer works for the American people.

However, no one can say we weren’t warned about this obvious deception and treachery brazenly perpetrated by the Trump administration.  As follows:

What really happened with the drone shoot down by Iran?

The further we get from the scene of the crimes over the Gulfs the more the evidence points to a HUGE psyop conducted by the U.S. Military and Intelligence Communities.

First, it has been proven that the American drone was purposefully flown into Iranian airspace.  Hence, the Trump administration knew in advance that this unlawful military action was both inflammatory and deliberately offensive.

Secondly, that the U.S. intrusion was pre-planned to provoke the Iranians to shoot it down in defense of their territory.

Thirdly, there was an American P-8 with 38 personnel on board that was flying close to the drone.

Why, exactly, was that P-8 warplane there?

Answer: To trick Iran into also shooting that manned plane down, too.  Had they taken the bait, President Trump would have undoubtedly unleashed all the firepower that the U.S. Military has been stealthily moving into the region.

Did the Neocons attempt to trick the Iranian military into shooting down an American P-8 warplane with 35 on board?

Now, just imagine if Iran had shot down that P-8 and all 38 servicemembers were killed.  Not only would the entire Mideast theater of war have blown up, the hot phase of World War III would have been triggered…just as the Neocons wanted.  See: THEIR FINAL SOLUTION: Market Crash, Dollar Collapse & World War 3

Moreover, in the event of failure of this black operation, Trump would have justification to issue a “No Fly Zone” over the areas of hostilities thereby further isolating Iran and hurting their fragile economy, which is what he has done. See: No-Fly Zone Established by the West to Further Isolate Iran and Destroy Their Economy

The bottom line here is that Trump appears willing to do anything his masters in Tel Aviv tell him to do in the interest of starting an apocalyptic war with Iran.  Yes, he is that submissive to Israel, and his many presidential efforts to MIGA confirm that.  See: Trump Terrorizes Iran for Defending Their Own Territory, Outright Lying to Provoke Tehran into War

From Peacemaker to Warmonger

Trump’s many and diverse bellicose initiatives throughout the Middle East since Inauguration Day reflect a Neocon Zionist agent sitting in the Oval Office.  The Powers That Be (TPTB) specifically chose Trump to greatly advance the New World Order agenda by co-opting America’s Patriot Movement.  Doing so was critical to craftily shifting the Right into a war posture. This clandestine strategy is also a crucial component of the nefarious NWO agenda which concerns the completion of the Greater Israel project.

Why else would Trump totally destroy his image and trash his peacemaking promises prior to the 2020 election?  TPTB now know that he has lost support majorly, even from his base. This indisputable data point spells disaster for his re-election prospects.  He was elected in 2016 for his promise to make peace, not war; and to drain the swamp.  He has done neither.

In point of fact, Trump has filled the White House with so many swamp creatures that Washington, D.C. has been transformed back into the fetid swampland the nation’s capital was originally build on.

It appears that the Neocon Zionist warmongers are pulling out all the stops in an effort to wage war on Iran.  They know that Trump will not be re-elected, so they are desperate to use him while he’s sill in the White House.  The Neocons don’t care that Trump will be prosecuted relentlessly the very day he leaves high office.  All they care about is the fulfillment of the  Greater Israel project.

Bolton, Pompeo, Pence, Haspel, Abrams, Coats, Mnuchin, Kushner, etc. make for a full-blown War Cabinet.  Each of these warmongering psychopaths was appointed by Trump to wage war against Israel’s enemies, especially against Iran.

None of this should come as a surprise to those who have watched Trump’s every furtive move.  This is an individual who was fastidiously trained and mentored from childhood to become the POTUS who would make sure that Israel always comes first, the United States second.

Truly, there’s only one way to properly understand what President Trump is doing these days.  His disastrous foreign policy is as dangerous as any POTUS ever, and there are very specific reasons for this extremely sad state of international affairs.  As follows: