Is this why the Kremlin allows Israel to attack Syria anytime the IDF wants to? 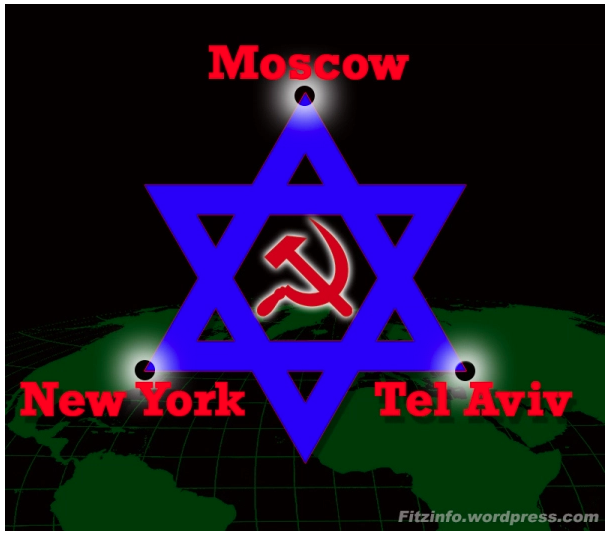 Is this why the Kremlin allows Israel to attack Syria anytime the IDF wants to?

While it’s true that the book excerpt posted below was written before the collapse of the Soviet Union, we wonder if the same Zionist-Bolshevik-Jewish power structure is responsible for some of Russia’s inexplicable behavior.

Really, why would President Putin even permit Israel to use a Russian military plane as a decoy during airstrikes on Syria killing all 15 on board?

It’s incomprehensible that Russia would first side with Syria’s Assad against the Zio-Anglo-American created ISIS terrorist network to reverse the war gains by the Western powers.  But then Putin’s Russia allows Israel to attack Syria at will without any repercussions whatsoever.

This extremely puzzling behavior must have an answer.  And it just may be that the following truthful narrative is still at work.  In other words, the true relationship between Moscow and Tel Aviv is much more hidden and complex than anyone knows.

If in fact Russia is playing some kind of covert 5D chess game on the global geopolitical chessboard, the world will find out soon enough.  Breaking free form the vice-grip of Zionist-Bolshevik-Jewish power is no small task, especially when they literally owned and operated the U.S.S.R. for 75 plus years.  See the following link.

At this point, you may be confused, Israel and the Soviets are ideological allies – both follow the ideas of Karl Marx, so both are communist/socialist. Yet, the Soviets supplied military equipment to the Arabs—Israel’s enemies; and at the same time, the Soviet Union’s enemy, the United States, was arming Israel.

A heavy migration of Jews from Russia to America started in 1831. Most of these were communist Jews. So many of these communist/Bolshevik Jews settled in New York City that New York has been referred to as ‘Moscow on the Hudson.’

The Zionist power over the U.S. Government in Washington, D.C. stems from the Zionist/ Bolsheviks centered in New York City. It is from New York that orders go out to the vast Zionist network all over the U.S. – a network that influences the economic and political affairs of not only our federal government, but nearly all, if not all,state governments, and to a great extent the governments of the larger and even medium-sized cities. This power of the Zionist/Bolshevik Jews over the U.S. makes the New York leg of the New York/Moscow/ Tel Aviv Triangle a tremendous influence over communist policies.

In viewing the 1973 War, most people—and it seems most Arabs—are of the impression that since Soviet Russia sold equipment to Egypt and other Arab countries, the Soviets were in support of the Arabs in the 1973 War. This is a false impression. To understand that this is the result of more deceit on the part of Israel and the Soviet Union, you must be aware of the Golda Meir – Stalin/Kaganovich Pact.

Golda Meir had been born in Russia, grew up in Milwaukee, Wisconsin and in 1921 migrated to Israel. In 1949, Golda Meir became Israel’s first ambassador to the Soviet Union.

Israel’s part of the pact was:

1. Israel would not allow any Western country, especially the U.S. to build military bases on Israeli territory.

2. Israel would allow an official communist party to function freely in Israel.

3. Israel would not make any agreement to solve the Palestinian problem.

4. Israel would influence world Jewry, especially in the U.S. to have Western powers adopt a policy of favoring Israel over the Arabs.

5. Israel was to continue its Marxist economic policies and prevent any free-enterprise tendencies.

Soviet Union’s part of the pact was:

1. The Soviets would institute a pro-Arab policy solely as a camouflage for its true intentions which was to furnish aid to the Arabs, but never enough to enable the Arabs to destroy Israel.

2. The Soviets would open the gates of Soviet satellite countries to Jewish immigration to Israel. Should this be insufficient, Soviet Russia then would open its own gates to emigration.

3. The Soviets would absolutely guaranteethe security of Israel.
** Both the Soviet Union and Israel would exchange intelligence reports.

From the terms of this pact, you can see it was, and still is, the aim of the Soviet Union and Zionist/Marxist Israel to prevent peace between the Arab countries and Israel until all the Arab countries are forced to adopt socialism under Soviet leadership.

In the conduct of the 1973 War you can see part of this deceitful agreement being utilized in particular the part about the Soviet Union helping the Arabs – but not helping enough to defeat Israel.

In planning the 1967 War, Israel was aware that the Arab countries bordering Israel were buying equipment from the Soviets, an Israeli ally. But, because of the Golda Meir – Stalin/Kaganovlch Pact, Israeli leaders knew the Soviets would not help the Arabs enough to defeat Israel – that the aid the Soviets were giving the Arabs was only ‘bait’ to draw the Arab countries into the Soviet trap. Also, Israeli leaders knew that their American Zionist brethren were making sure the U.S. Government was supplying enough arms to stop the Arabs; and would send more equipment, even troops if necessary.

When the 1973 War started, Jordan, Egypt, Syria and Iraq surprised Israel with their improved fighting capability.

The Egyptian Army faced what would seem an impossible task in its attempt to penetrate Israeli territory.

First, there was the water barrier, the Suez Canal, to cross. Then, they would face a high wall of sand and fine dust which was erected by Israel. Behind that wall was a third barrier—a line of Israeli fortifications. These fortifications were stronger than the Maginot Line erected by France before World War II to stop any German invasion of France.

Yet, by ingenuity, the Egyptian Army crossed the Suez Canal, went over the sand and dust barrier and broke through the heavy fortifications in a matter of a few hours.

Israel was in trouble; the Arabs were winning the war.

But, as pre-planned – If necessary, the U.S. airlifted huge amounts of military equipment and supplies to Israel and, as I mentioned before, the U.S. Airborne Division at Ft. Bragg, N.C. and U.S. troops stationed in Germany were placed on alert and would have been sent to help the Israeli forces if it became necessary to help Israel win the war. Fortunately for America, American troops weren’t needed to help Israel survive. The additional arms were enough. However, the Arab forces were strong enough to stop Israel from taking over more Arab land. In fact, Egypt was able to take back part of the Sinai.

Egypt’s president Sadat realized that the Soviets had no intention of helping the Arabs win the war; that the Soviets in selling them some equipment were only trying to trap Egypt in the Soviet net. So, Sadat kicked Soviet military advisors and civilian technicians out of Egypt.