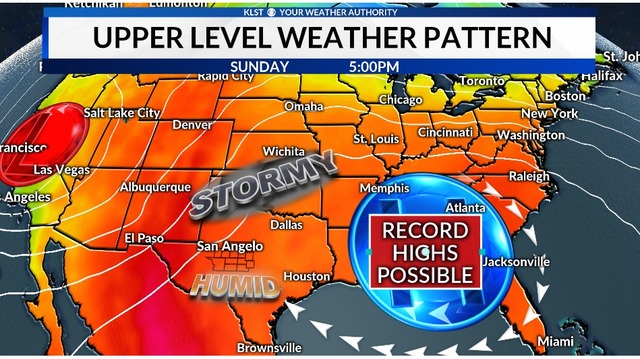 Record high temperatures are expected to hit the Southeast as a dangerous heat wave, also dubbed death ridge, spreads across the region over Memorial Day weekend.

The National Weather Service says highs could soar well into the 90s and even close to 100 degrees in some areas of the Deep South and the Carolinas.

The Tennessee Valley region could see temperatures reach up to the mid 90s through Wednesday, with heat indices hitting the upper 90s, according to the NWS office in Morristown.

The high temperatures could break records set as far back as May 28, 1914 when Knoxville experienced a high of 94.

Middle Tennessee will see afternoon highs 10-12 degrees above normal through the holiday weekend, the National Weather Service in Nashville said in a Facebook post.

Nashville tied the record high temperature for May 23 with a high of 91. On Saturday, a record high of 93 set in 1926 could be broken.

“Mother Nature continues to play this cruel joke on the citizens of Middle TN. Doesn’t she know it’s still spring?” The post said. “Apparently she doesn’t give a hoot. Instead, she’s decided to set up a hot-box across the region.”

In addition to the hot temperatures, there will be little relief in terms of cooling rain.

“Yes, you’re very likely going to have to wait until the middle of next week before seeing any of the wet stuff,” NWS said.

Weather.us meteorologist Ryan Maue called the heat wave a “death ridge” that will bring calm winds and bone-dry conditions, in addition to the extreme heat. (A “ridge” is an area of high atmospheric pressure, one that prevents clouds and rain from forming.)

Extreme heat — perhaps all-time record highs — to be challenged this weekend across the Southeast. Weather models have consistently been > 100°F from Tallahassee into southern GA and SC.

A special weather statement was issued by the NWS in Atlanta, Georgia, advising of unseasonably high temperatures, specifically highs of 96 on Sunday and Monday and continuing through the middle of next week.

“The chance for precipitation will remain virtually nil,” the weather service in Atlanta said.

“Please take extra precautions for the heat by remaining hydrated, avoiding prolonged exposure to the sun, and limiting strenuous activities when spending time outdoors,” the NWS in Atlanta said in their statement. Unfortunately, the unusual heat is predicted to continue baking the Southeast well into early June, according to the latest forecast from the Climate Prediction Center.

USA Today contributed to this report.