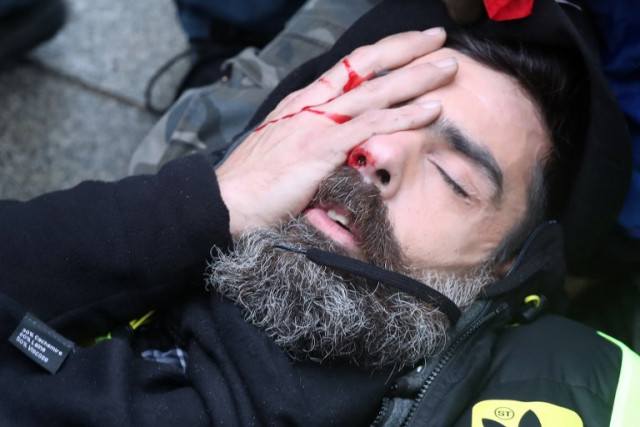 French protest leader ‘will be disabled for life’ after eye injury: Yellow Vest activist is put in coma after he is struck the in face by rubber bullet amid calls for ‘mass uprising’ against Macron

By PETER ALLEN IN PARIS FOR MAILONLINE and AP

A Yellow Vest leader hit in the face by a rubber bullet during a protest has been placed in a coma and is likely to be disabled for life.

Today Philippe de Veule, Mr Rodrigues’s lawyer, confirmed his client has been ‘placed in an artificial coma’ and was likely to be ‘handicapped for life’.

Mr Rodrigues was in Place de la Bastille, one of the French capital’s most famous squares, during rioting on Saturday afternoon when he was hit in the right eye.

Dramatic video that he filmed himself showed the moment he was struck in the face, moments after protesters were seen fleeing across the square. 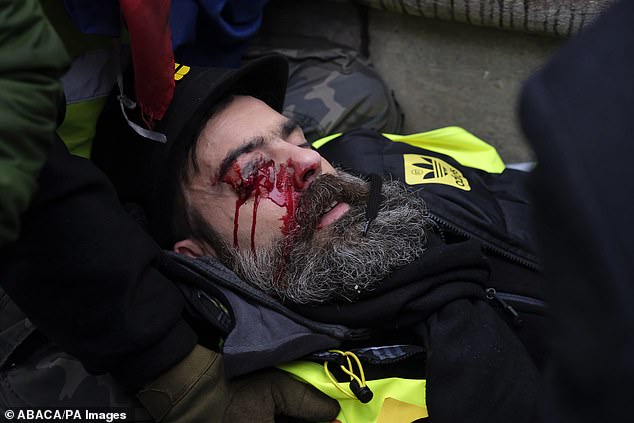 Jerome Rodrigues, one of the leaders of the the Yellow Vests movement, wast seriously injured in the eye by a projectile during clashes between protesters and riot police 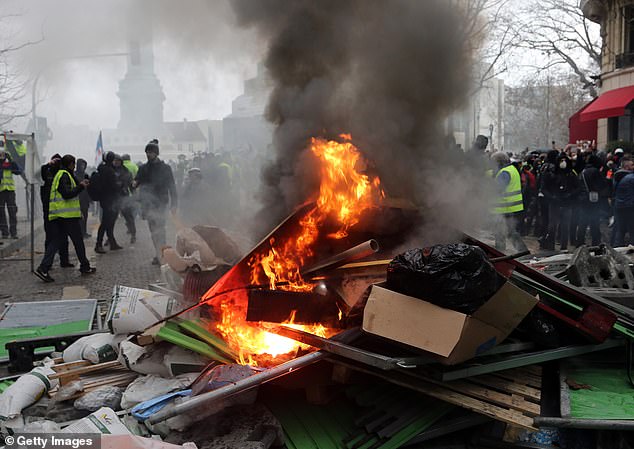 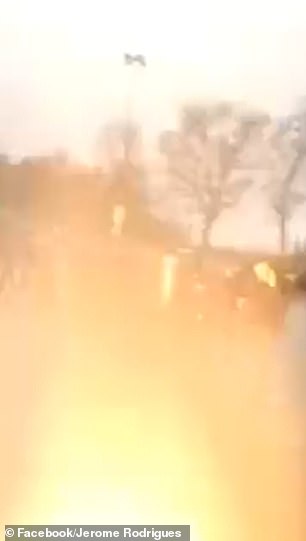 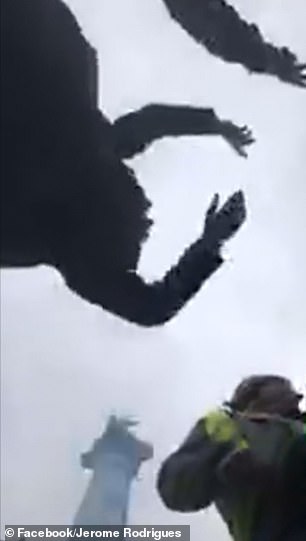 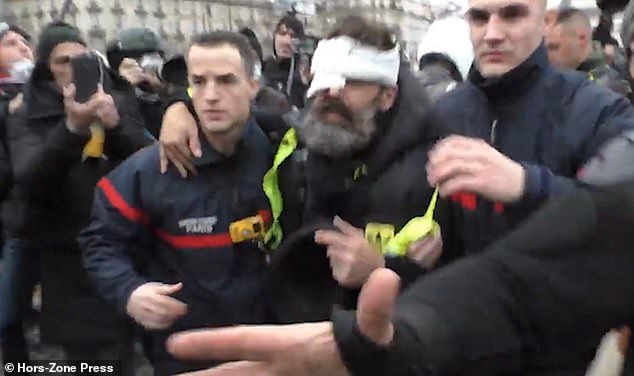 Yellow vest activist Mr Rodrigues, was injured during Paris a protest and was bandaged up and taken to the hospital

Other protesters threw projectiles and clashed with police trying to disperse them.

The camera suddenly pointed up towards the sky as Mr Rodrigues fell to the ground and concerned protesters surrounded the injured man.

In other clips filmed from other in the area, Mr Rodrigues could be seen clutching his eye as blood poured down his face.

The mobile phone footage was recorded at around 4pm and then posted on social media. 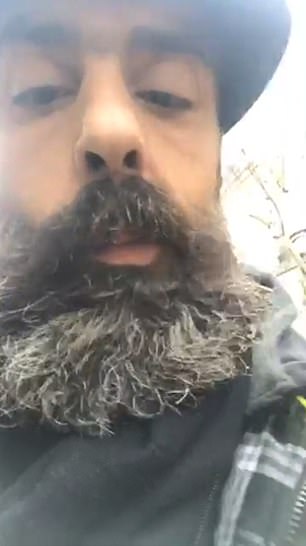 It was the 11th Saturday in a row during which the Yellow Vests – who are named after their high visibility jackets – took to the streets across France.

While still conscious, Mr Rodrigues told the LCI news outlet: ‘It’s very painful, I’m waiting for the doctors who have to come and tell me what it is, it’s my right eye, and I think I stayed sedated for seven or eight hours.

‘Originally, I arrived on the Place de la Bastille to try to make sure that the Yellow Vests go away, that they can leave the Bastille following attacks by Black Bloc anarchists against the police.

‘I’m a hyper pacifist, I don’t want anyone to hurt themselves, I went to get my little Yellows out of this hell.’

Mr de Veule said an official complaint would be made about the incident, which is already being investigated by the police.

Referring to rubber projectiles made from French-made weapons, Mr de Veule said: ‘It was a flash ball’. I have material proof of this.’

In turn, police suggest that a non-lethal grenade exploded in front of Mr Rodrigues, and he was hit by shrapnel.

Eric Drouet, another Yellow Vests leader, said the incident justified ‘a mass uprising without precedent by all useful and necessary means’.

Such words will be of huge concern for Mr Macron, who on Thursday accused British politicians of ‘tearing society apart’ by allowing a Brexit referendum in Britain.

The President’s Interior Minister, Christophe Castaner, said there were more than 60 arrests cross Paris on Satuday, and violence in other major cities including Bordeaux and Marseille. 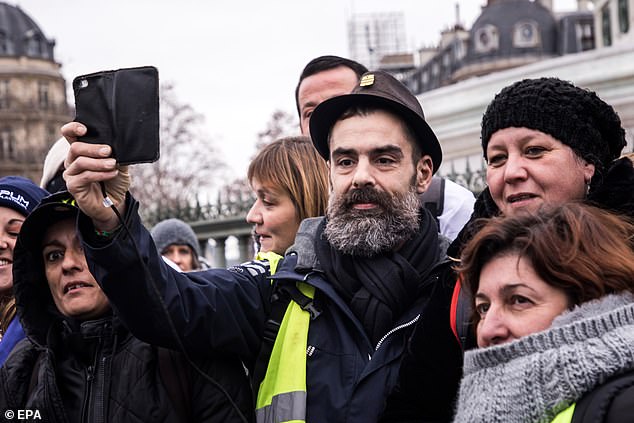 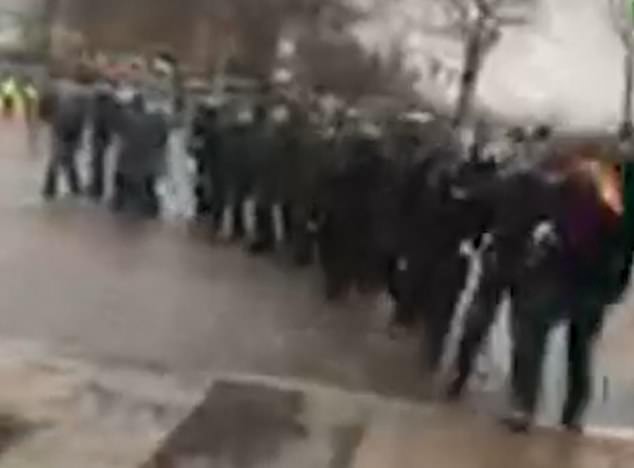 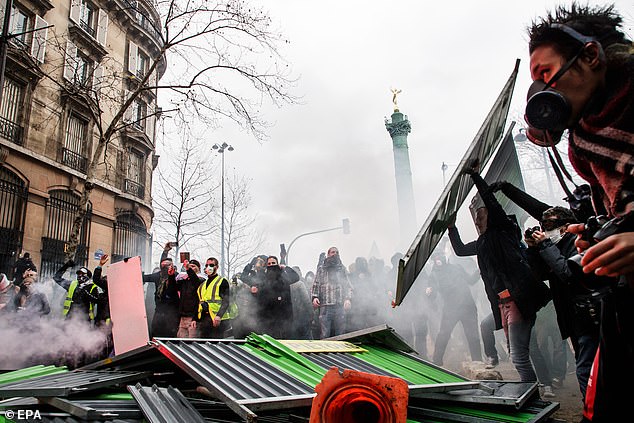 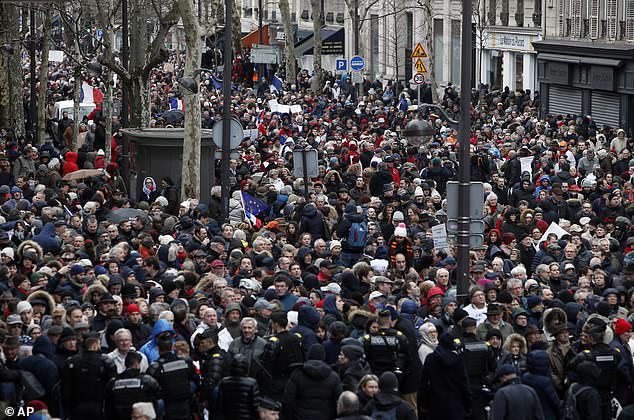 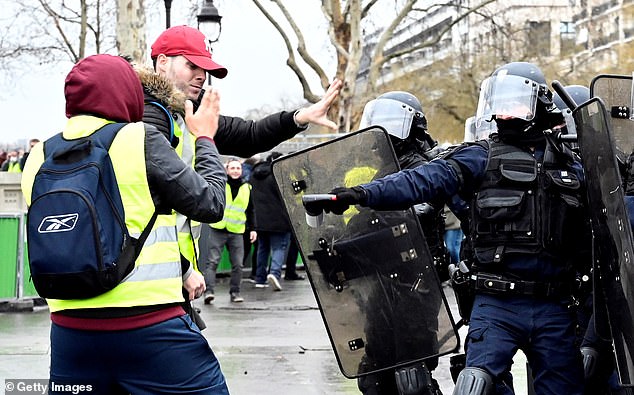 Mr Castaner said: ‘I condemn with the greatest firmness the violence and degradations committed this Saturday again, in Paris and in the provinces, by thugs camouflaged in yellow vests.’

Despite a range of concessions by President Macron including scrapping green taxes of diesel and petrol, the Vests continue to call for him to step down.

Protestors have been joined by extremists from the far Right and the ultra-Left, as well as anarchists intent on causing as much damage as possible.

The Yellow Vests said their protests would continue indefinitely as they campaign for even more concessions. 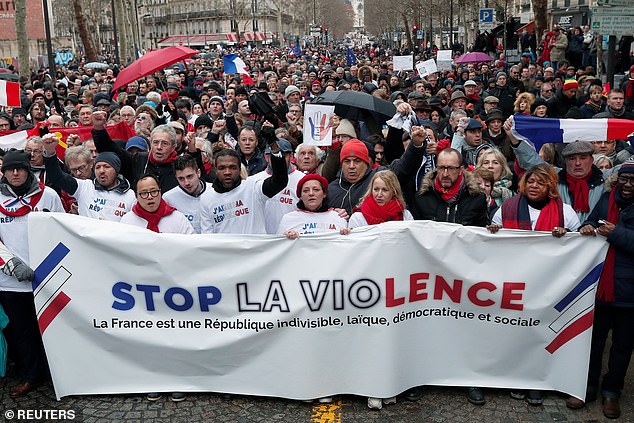 Opponents of violence take part in a demonstration by the ‘red scarves’ movement in Paris, today. The banner reads: ‘Stop the violence’ 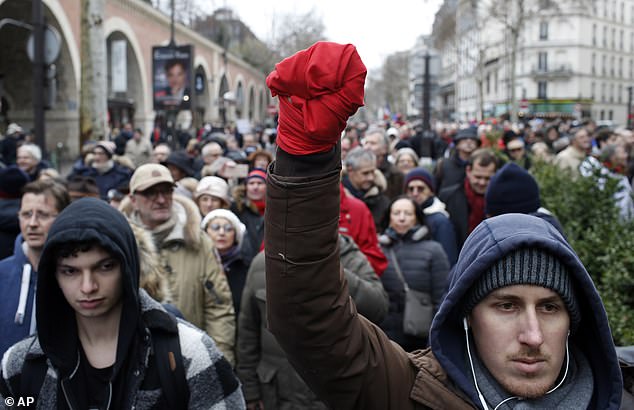 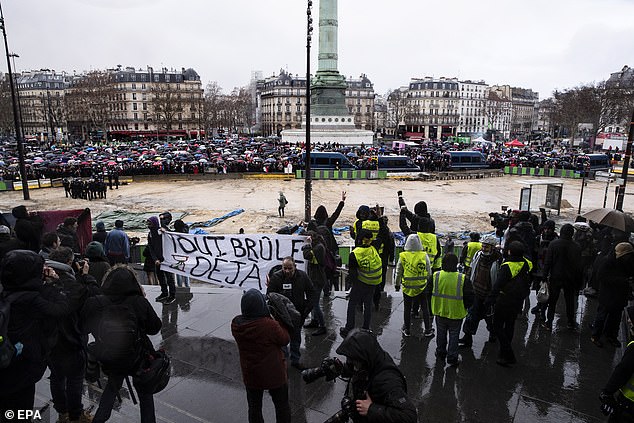 A dozen ‘Yellow Vests’ movement members shout at the thousands of ‘Foulards Rouges’, or Red Scarfs, demonstrators arriving at the Place delaying Bastille after a march in support of the government policy in Paris today 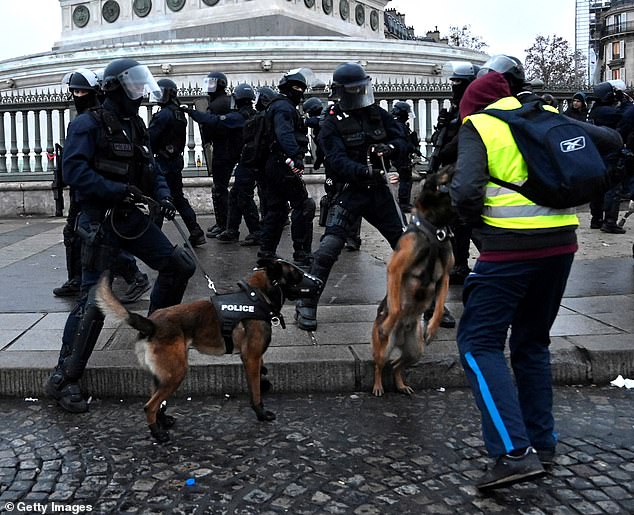 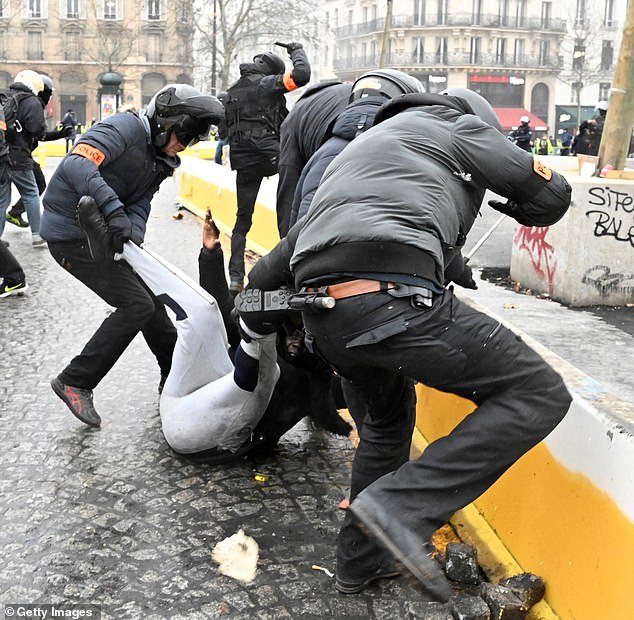 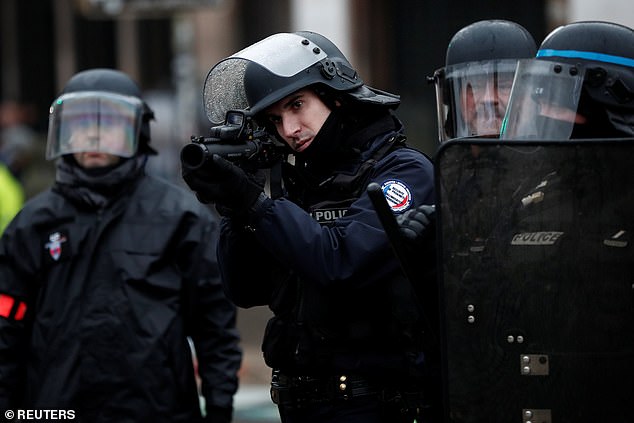 French police are investigating how the prominent yellow vest protester suffered his eye injury, as well as other protest-related injuries.

Violence by protesters and the sometimes-aggressive police response have prompted a national debate since the anti-government movement kicked off two months ago.

A counter-demonstration is planned Sunday in Paris by groups calling themselves the ‘red scarves’ and ‘blue vests’ to protest the violence.

Paris police said Sunday they are investigating the eye injury of Mr Rodrigues, among other protester injuries.

The independent Mr Macron, leader of the Republic On The Move party, won the French presidential election in a landslide in 2017.

But he is now dubbed the ‘President of the Rich’ with polls showing his popularity rating struggling to get above the 30 per cent mark.