Ginsburg soon to be SCOTUS history! Could be out by end of January 2019. A justice cannot work from home—PERIOD! 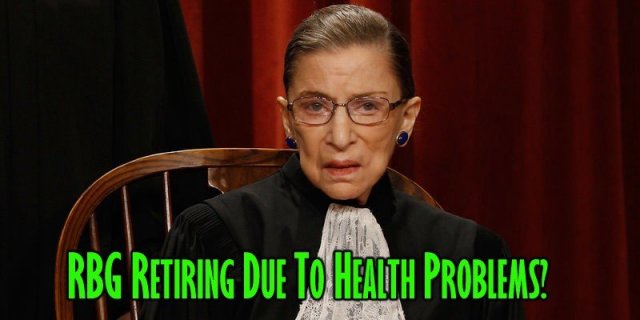 Ginsburg soon to be SCOTUS history! Could be out by end of January 2019. A justice cannot work from home—PERIOD!

Justice Ruth Bader Ginsburg Will Retire from the US Supreme Court in January, 2019

Speaking privately, a law clerk says the Justice’s Cancer has come out of remission

Editor’s Note; We first posted this story in September, 2018. Sadly we were correct, as Justice Ginsburg underwent surgery on December 15th to remove a cancerous growth from her lungs. We are reposting it since so many people contacted us to ask if it was true, which sadly, it is. She did not appear for oral arguments on January 7, 2019, & it is becoming increasingly clear that she will not ever return to the bench. https://www.smobserved.com/story/2018/12/20/news/snopes-decries-observer-as-fake-news-for-posting-story-that-justice-ginsburg-has-cancer-sadly-we-were-right/3766.html

While the Nation is preoccupied with the appointment of Judge Brett Kavanaugh to replace Justice Anthony Kennedy, it appears there will soon be another vacancy on the US Supreme Court

U.S. Supreme Court Justice Ruth Bader Ginsburg has had a re-occurrence of malignant melanoma, she has told her law clerks. Ginsburg was treated in 1999 for colon cancer and had surgery in 2009 for pancreatic cancer.

She has told key Democratic members of the Senate about her medical condition, including ranking Democratic member of the Judiciary Committee Dianne Feinstein. This explains in part the “take no prisoners” attitude of the Democrats during the Kavanaugh nomination, carefully orchestrating weak 37 year old allegations against Kavanaugh by Women he barely remembers knowing in High School and College.

Kavanaugh is a player in this drama. He’s in the wrong place at the wrong time . President Donald J Trump will be replacing Notorious RBG, the lovechild of the left, and so will remake the Supreme Court for a generation. The Democrats simply must win back the Senate in November 2018, progressives feel.

Ginsburg, 85 was appointed by President Bill Clinton and took the oath of office on August 10, 1993. She is the second female justice (after Sandra Day O’Connor) of four to be confirmed to the court (along with Sonia Sotomayor and Elena Kagan, who are still serving). Following O’Connor’s retirement, and until Sotomayor joined the court, Ginsburg was the only female justice on the Supreme Court. During that time, Ginsburg became more forceful with her dissents, which were noted by legal observers and in popular culture. She is generally viewed as belonging to the liberal wing of the court. Ginsburg has authored notable majority opinions, including United States v. Virginia, Olmstead v. L.C., and Friends of the Earth, Inc. v. Laidlaw Environmental Services, Inc.

Ginsburg was born in Brooklyn, New York, to Russian Jewish immigrants. Her older sister died when she was a baby, and her mother, one of her biggest sources of encouragement, died shortly before Ginsburg graduated from high school. She then earned her bachelor’s degree at Cornell University, and was a wife and mother before starting law school at Harvard, where she was one of the few women in her class. Ginsburg transferred to Columbia Law School, where she graduated tied for first in her class.

Following law school, Ginsburg turned to academia. She was a professor at Rutgers School of Law and Columbia Law School, teaching civil procedure as one of the few women in her field. Ginsburg spent a considerable part of her legal career as an advocate for the advancement of gender equality and women’s rights, winning multiple victories arguing before the Supreme Court. She advocated as a volunteer lawyer for the American Civil Liberties Union and was a member of its board of directors and one of its general counsels in the 1970s. In 1980, President Jimmy Carter appointed her to the U.S. Court of Appeals for the District of Columbia Circuit, where she served until her appointment to the Supreme Court.