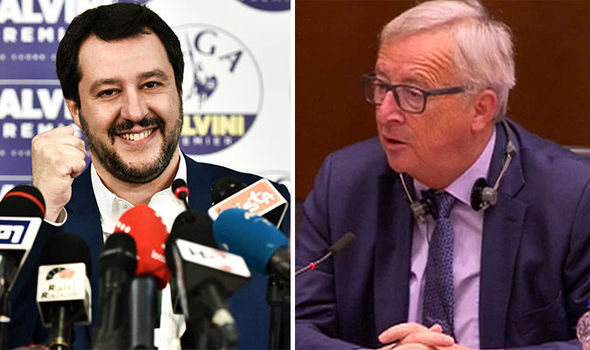 Ignoring warnings from the European Commission, the ECB and the European Commission (as well as practically every other supranational organization in Europe), the populist-led Italian government managed to submit their draft budget to the Commission before a midnight deadline – an outcome that was cheered by BTP traders, who bought back into Italian bonds, once again compressing the spread to bunds, which has blown out in recent months.

But rather than representing a deescalation of tensions between Italy and Brussels, the game of fiscal chicken in which both sides are presently engaged is instead entering its most acute phase, as Brussels now has two weeks to review the budget proposal before it can either accept the plan, or send it back with requests for revisions. And anybody who has been paying even passing attention to the populist government’s denigration of EU budgetary guidelines over the past few months should already understand that Brussels won’t just sit back and accept the budget for what it is.

In fact, European Commissioner Jean-Claude Juncker hinted as much Tuesday morning when he told Italian reporters that accepting the budget would be tantamount to inviting an widespread revolt against the EU, per Italian newswire ANSA and the FT. Juncker also blasted Italy for abandoning the fiscal commitments it made when it joined the EU. However, though they have wavered from time to time, the Italians haven’t kept their intentions to press for a budget deficit equivalent to 2.4% of GDP a secret. Even Giovanni Tria, Italy’s economy minister, defended the draft budget, saying the deficit “would be considered normal in all Western democracies, not explosive.”

Undeterred by the fact that there’s absolutely no political will in the Italian government to back down from their budget stance, despite threats from the ECB to provoke a Greece-style banking crisis if the Italians don’t yield to EU rules.

“There is a gap between what was promised and what is being presented today,” said Mr Juncker.

“We are going to have a virtuous debate with our Italian friends who know that their level of public debt is too high and that the draft budget does not fully respect the recommendations of the eurozone ministers.”

“If we accepted the slip, some European countries would cover us with insults and tirades with the accusation we are being too flexible with Italy,” Juncker told Italian media.

Meanwhile, Italian Deputy Prime Minister Matteo Salvini, one of two party chiefs who are effectively running the country, said during a news conference that this budget “doesn’t accomplish miracles, it doesn’t multiply fish and bread, but it opens opportunities to work for hundreds of thousands of youths,” Salvini said in Monday evening news conference flanked by Prime Minister Giuseppe Conte, Di Maio, and Finance Minister Giovanni Tria. “After 137 days of governing, I think we can be satisfied with what we’ve done.”

In reference to the festering acrimony between EU bureaucrats and populist Italian leaders, who have even threatened to sue Juncker for jawboning Italian bond yields, the European Commissioner said speculation that he’s somehow “against Italians” is “rubbish”.

“They attack me, insult me but do not ask questions. Let’s stop saying that I am against Italy. It’s rubbish, it’s a lie,” said Mr Juncker.

Italian Prime Minister Giuseppe Conte is set to address EU leaders at a summit in Brussels on Thursday, despite fears that he might hijack the summit’s agenda, which leaders have hoped would focus on finalizing a draft Brexit deal. But while some EU leaders have pushed to give Italy a pass, fearful of provoking an EU “showdown,” Juncker has continued to insist that the EU must abide by its rules. Conte and Tria are expected to address Italian lawmakers Tuesday afternoon Rome time.

Officials are fearful the mini eurozone summit could become a flashpoint between Rome and the EU if hawkish governments such as the Netherlands demand Mr Conte stick to Rome’s budget commitments. A senior EU official warned against an EU showdown.

“There are clear procedures on assessment of national budgets,” said the official who urged “mutual respect” on all national spending plans. “It is not the role of other member state leaders to make any assessment of the budgets. The ball is in the court of the commission.”

Mr Juncker insisted the assessment would be made without any “prejudice” against Italy’s Eurosceptic coalition government, made up of the rightwing League and anti-establishment Five Star parties.

“Europe operates according to pre-established rules. Incoming governments must respect the word of those who preceded them,” he said.

As speculation about an ‘Italeave’ scenario has continued to fester as the budget showdown has dragged on, one reporter asked Juncker if he felt that European Union could survive an Italian exit. Citing polling data showing that most Italians favor remaining in the EU, Juncker insisted that the EU wouldn’t survive the departure of its third-largest economy – and that Italy wouldn’t survive an exit from the EU.

“Europe needs Italy and Italy needs Europe,” Juncker said, answering “No” when asked if Europe could survive an Italian exit.

But will this in any way shift Brussels’ evaluation of the Italian budget? We think not. Still, we imagine markets will be ‘disappointed’ when Brussels sends the draft back covered in red ink.