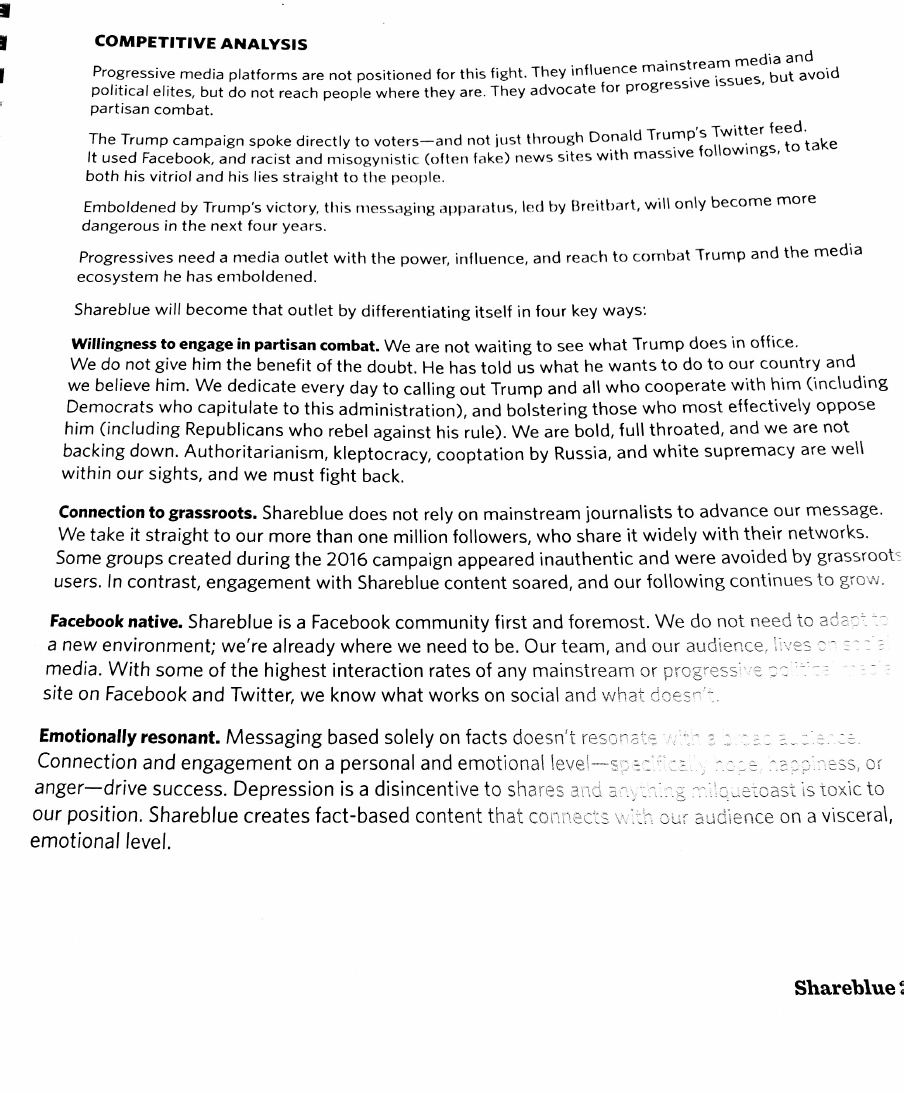 The recent wave of censorship of conservative voices on the internet by tech giants Facebook, Twitter, YouTube and Apple mirrors a plan concocted by a coalition of George Soros-funded, progressive groups to take back power in Washington from President Trump’s administration.

A confidential, 49-page memo for defeating Trump by working with the major social-media platforms to eliminate “right wing propaganda and fake news” was presented in January 2017  by Media Matters founder David Brock at a retreat in Florida with about 100 donors, the Washington Free Beacon reported at the time.

The Free Beacon obtained a copy of the memo, “Democracy Matters: Strategic Plan for Action,” by attending the retreat.

The memo spells out a four-year agenda that deployed Media Matters along with American Bridge, Shareblue and Citizens for Responsibility and Ethics in Washington (CREW) to attack Trump and Republicans.

The strategies are impeachment, expanding Media Matters’ mission to combat “government misinformation,” ensuring Democratic control of the Senate in the 2018 midterm elections, filing lawsuits against the Trump administration, monetizing political advocacy, using a “digital attacker” to delegitimize Trump’s presidency and damage Republicans, and partnering with Facebook to combat “fake news.”

The Free Beacon in its January 2017 story said Brock sought to raise $40 million in 2017 for his organizations.

The document claims Media Matters and far-left groups have “access to raw data from Facebook, Twitter, and other social media sites” so they can “systemically monitor and analyze this unfiltered data.”

“The earlier we can identify a fake news story, the more effectively we can quash it,” the memo states. “With this new technology at our fingertips, researchers monitoring news in real time will be able to identify the origins of a lie with mathematical precision, creating an early warning system for fake news and disinformation.”

Media Matters met with Facebook, which boasts some 2 billion members worldwide, to discuss how to crack down on fake news, according to the memo.

The social media giant was provided with “a detailed map of the constellation of right-wing Facebook pages that had been the biggest purveyors of fake news.”

Brock’s memo also says Media Matters gave Google “the information necessary to identify 40 of the worst fake new sites” so they could be banned from Google’s advertising network.

Facebook, meanwhile has changed its newsfeed algorithm, ostensibly to combat “fake news,” causing a precipitous decline in traffic for many conservative sites.

President Donald Trump himself was affected, with his engagement on Facebook dropping by 45 percent.

A study in June by Gateway Pundit found Facebook had eliminated 93 percent of the traffic of top conservative news outlets.

Western Journal, in its own study, found that while left-wing publishers saw a roughly 2 percent increase in web traffic from Facebook following the algorithm changes, conservative sites saw a loss of traffic averaging around 14 percent.

‘Totalitarian impulse’ of the left

On Friday, Facebook appeared to be “shadow banning” the non-profit education site PragerU, founded by talk-host Dennis Prager, causing a drop in engagement of 99.9999 percent while removing two videos regarded as “hate speech.”

After Facebook rejected a highly inspirational ad for a Republican congressional candidate that included images depicting her parents’ persecution under the Khmer Rouge communist regime in Cambodia, Twitter followed up with its own ban.

Last month, WND reported moderate Muslims and counter-terrorist activists were increasingly being restricted by Silicon Valley, while terrorist content remains on social-media platforms, according to researchers.

Trump campaign chief Parscale said last week the banning of Jones “will inevitably lead to the silencing of those with far less controversial opinions.”

“What we are seeing in Big Tech is the inherent totalitarian impulse of the Left come into full focus,” Parscale said.