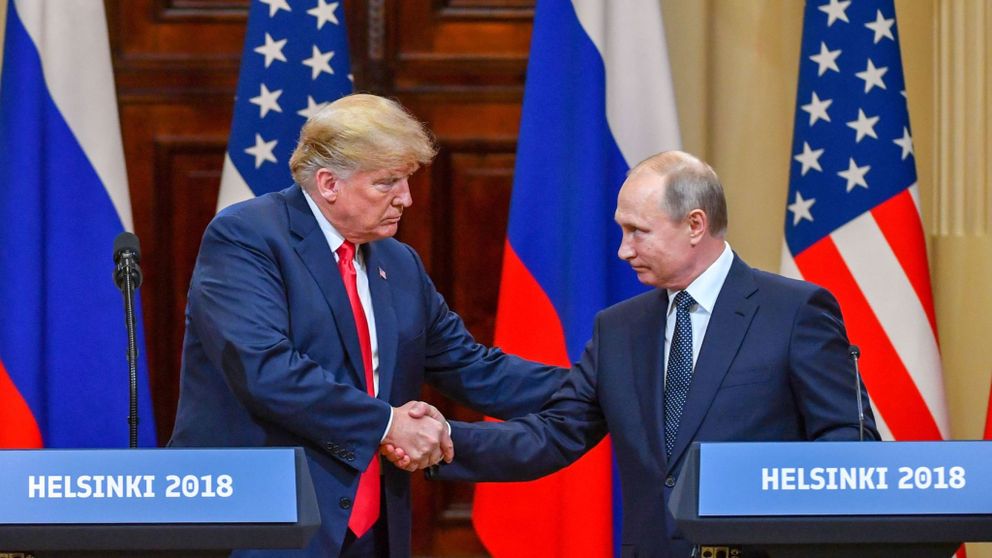 Yes, Trump and Putin are now on the same ball team.

During Meeting in Helsinki

By every measure the mainstream media (MSM) has gone completely insane.

So has the American political class gone stark raving mad … on both sides of the aisle.

As for the U.S. Intelligence Community, they went berserk the very day that Donald Trump declared his candidacy in June of 2015.  Wiretapgate, Dossiergate, Spygate and Russiagate are just a few of the intel scandals that prove the spooks have gone totally bonkers.

Of course, the power elite has been acting crazy ever since Hillary Clinton lost the election.  After all, she wasn’t supposed to lose; and many kingmakers and financiers lost big bucks on the gamble. George Soros Lost Nearly $1 Billion Following Trump’s Victory

Everyone knows in their bones that the current state of affairs inside the Beltway cannot continue.  And that things are about to get very tense indeed.  Why exactly?

Because those in the know are now aware that Trump and Putin made a secret deal in Helsinki (which is exactly why they demanded to meet alone).  That’s also why the CIA’s Mockingbird Media went ballistic before, during, and after that historic meet-up.

What are the critical points?

Trump faces an existential crisis every day of his presidency.

Putin’s Russia faces an existential crisis every day of the year.

Deep State has it in for both of them, so why not join forces however that can be surreptitiously done.

Which is precisely what Trump and Putin are doing.  They have made common cause with the goal of simply staying alive long enough to carry out their joint and respective individual missions.

Remember, whereas President Putin is the most protected head of state in the world today, President Trump is one of the most exposed. Therefore, Trump can use all the help he can get just as Putin needs to be shielded from the warmongers.

While Russia possesses more evidence of governmental crime conducted throughout the Anglo-American Axis than any other country except the U.S. and U.K., Trump has access to none of it thanks to Jeff Sessions.

It wasn’t Russia that tried to fix the 2016 U.S. presidential election, it was the British.

However, because of Trump’s special relationship with Putin, the POTUS has now acquired proof of the most serious indictable offenses committed against the American Republic.

The super-critical point here is that Trump desperately needed what Putin possesses as an insurance policy against a full-blown coup d’état or worse, an outright assassination. See: Deep State’s Intensifying Coup Against Trump, Traitors Boldly Expose Themselves

Likewise, Putin needs what Trump has as Commander-in-Chief of the U.S. Armed Forces–a promise not to attack Russia with nuclear weapons or otherwise.  He also could use an American counterpart who will tone down the deafening screams of Russophobia.

The Meeting in Helsinki

First, it’s of paramount significance to understand that Trump did not have to meet with Putin in Helsinki.  He took a huge gamble that was preordained to lose by any analysis.

As far as the midterm elections are concerned, that meeting took place with extremely serious risks.  In other words, the upside potential was virtually zero for Trump, whereas the downside risks to the 2018 election outcomes were negative infinity.  Trump even lost many in the Republican Party after Helsinki.

KEY POINT: Trump cannot lose either the Senate or the House after the midterms.  The loss of either or both puts his administration and/or agenda in great jeopardy.  Hence, his meeting with Putin must have been a highly calculated gambit during which he could strike a deal and acquire some conclusive hard evidence against the traitors who have been brazenly executing a soft coup. See: Putin Gives Trump 160 Terabytes Of Communication Intercepts

The meeting in Helsinki is being called the biggest mistake of his term for specific reasons. The globalist traitors know that they must profoundly demonize both Trump and Putin now that the two presidents have forged an alliance against Deep State.

Even during the weeks leading up to the meeting with Putin, the MSM went into hysterics as to why such a meeting was treasonous.  As if meeting to bring about world peace undermines the USA in any way.  Those countless accusers were merely projecting their own guilt about their ongoing insurrection known as the Purple Revolution.

The U.S. Intelligence Community especially knew that Putin has the goods on so much unrevealed corruption and high-level criminality during the Obama Administration.  For it doesn’t get any bigger that Browdergate. BILL BROWDER: Hillary’s bagman and ex-American oligarch wanted by Russia for stolen $400 million that went to Clinton campaign

There is only one reason why Trump would conduct a joint press conference with Putin.  He was sending a message to the NWO globalists that he stands with Putin.  Just take a good look at them standing together in the preceding photo; they are definitely compadres.

KEY POINT: The strongest indication that Trump and Putin have formed a fierce and formidable alliance against Deep State is the invitation to the White House extended by the POTUS as seen here: Trump and Putin Defy Deep State Yet Again

Because the entire US political establishment is vastly arrayed against him, Trump knows that he must rely on Russian intel, Russia’s international independence and Moscow’s Internet prowess to survive the ever-intensifying White House coup.

Trump particularly knows that it was Russia that came to the aid of the United States at two other crucial junctures in American history.  As follows:

Each fortuitous intervention is well known among those who have not forgotten our unique relationship with the Russian people.  First, there was the indispensable assistance rendered by Catherine the Great during the American Revolutionary War.  How Russia Helped The 13 Colonies Win The American Revolution  Some historians firmly believe that without that diplomatic Russian finesse, we would still be a British colony.

Secondly, there was the timely aid when Russia blocked British-led intervention against the Union during the American Civil War.  It’s quite likely that without the Russian Navy showing up when they did, the Civil War might have gone on much longer and with a vastly different result.
(Source: Putin’s Russia Relentlessly Attacked By Deep State, We the People Also Under Withering Assault)

With this historical understanding, it’s much easier to comprehend Trump’s extremely perilous but necessary actions in Helsinki.  He is also acutely aware of the good will and forbearance demonstrated by the Kremlin toward their Western (read Anglo-American) persecutors since Putin first took high office.

Put another way, Trump met with Putin as an act of sheer self-preservation.  Likewise, Putin meeting with Trump was a way of further protecting the Russian Federation from NATO aggression and the NWO globalists hell-bent on world domination.

Special Note: If you were Donald Trump, who could you really trust in the White House? The guy is really alone. Could you trust your liberal daughter and son-in-law who are both lifelong Democrats pushing for transgenders in the military?  Could you trust the Neocons who started all the Mideast wars you promised to terminate? Would you even completely trust your vice president who has voiced support for those same wars? Could you trust the Attorney General you appointed to drain the swamp but is doing the exact opposite?  Could you trust the various Chiefs of Staff who do their darnedest to cut off your communication with your base?  Would you trust your personal attorney who taped your most confidential conversations about the most sensitive matters?  Would you ever again trust the intel community when the C.I.A., NSA, FBI, and DOJ colluded to prevent your election victory?  Who then conspired again to fabricate a bogus “Russian collusion” story in order to justify a formal impeachment process.  And, who continue to oversee and coordinate an insidious soft coup every day of your term in office.  The bottom line is that when the West Wing is full of traitors and coup plotters, what else can Trump possibly do to save the American Republic?  That’s right, he needs all the friends he can get and he knows that Putin has been an exceptional friend to Syria’s President Bashar al-Assad.

In spite of what might normally be considered hyperbole, the true state of affairs in the White House is much, MUCH more dire than described in this analysis.  You know the old saying: “You don’t know what you don’t know… and it’s better that you don’t!”

The purple revolutionaries (e.g. Soros, Obama, Clinton, Biden, Podesta, Brennan, Clapper, Hayden, Mueller, Comey, Rosenstein, McCabe, Schiff, Waters, Schumer, Pelosi, etc.)  know they must strike first before they are taken down.  Trump, on the other hand, is facing the loss of everything he has—EVERYTHING!  In the planned overthrow of the Trump administration, Deep State will take no prisoners in the interest of sending an unambiguous message to all future leaders everywhere: “Don’t ever mess with Deep State!”

As for Trump’s Plan A, Plan B and Plan C, he will likely need each of those and other flawless plans at different points of necessary self-defense and political survival.  The stark reality, however, is that his only way out of the quicksand is to drain the swamp.

Look it, Candidate Trump promised to drain the swamp … … … and it appears the Universe — the Highest Power — the Supreme Being will hold him to it.  By draining the swamp post-haste, he will expose all the seditious perps for all to see and thwart their swiftly evolving Purple Revolution.

I. Soros Must Be Arrested, Prosecuted and Imprisoned to Prevent Civil War

II. MILITARY TRIBUNALS: Why They Are Absolutely Necessary

One thing is for certain and that is the overwhelming significance of the midterm election outcomes.  Both sides know they must win, and win big.  Soros & Company are already doing everything possible to steal every election in sight.  Team Trump seems to be taking everything in stride perhaps assuming that the Democrat’s wacky socialist agenda will compel many more voters onto the Trump Train.  No matter what happens, both sides know that someone’s fate will be sealed irreversibly on Election Day.  As the subtitle of this post proclaims: