By The Siberian Times reporter

‘Taiga burning’ – as scared bears are driven out of their natural habitat towards settlements where they are shot as danger to people. 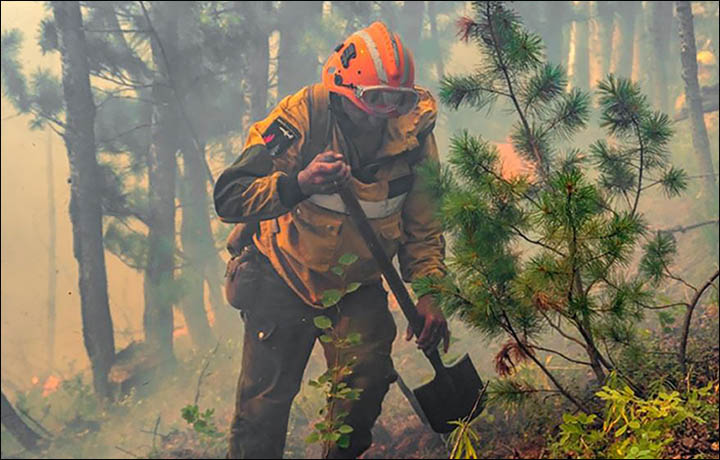 Dramatic new pictures show the latest forest infernos as reports come from the US that wildfire smoke from Siberia has blown some 5,000 miles to New England.

This comes as clouds are being spiked with chemicals in Yakutia to provoke rain to extinguish flames – and amid claims from environmentalists that the scale of forest fires has been hidden by the authorities.

In the US, Storm Center 7 Chief Meteorologist Eric Elwell was quoted saying: ‘Strong winds aloft in the polar jet stream carried some of the smoke from the fires across the Bering Strait and into northern Alaska, then southeastward into central Canada and eventually across the Great Lakes and eastward into southern New England.’

The Weather Channel illustrated a report on the problem with a graphic infra-red picture from a Sentinel 2 satellite image taken more than two months ago – on 9 May – over Zeya Reservoir in Amur region. 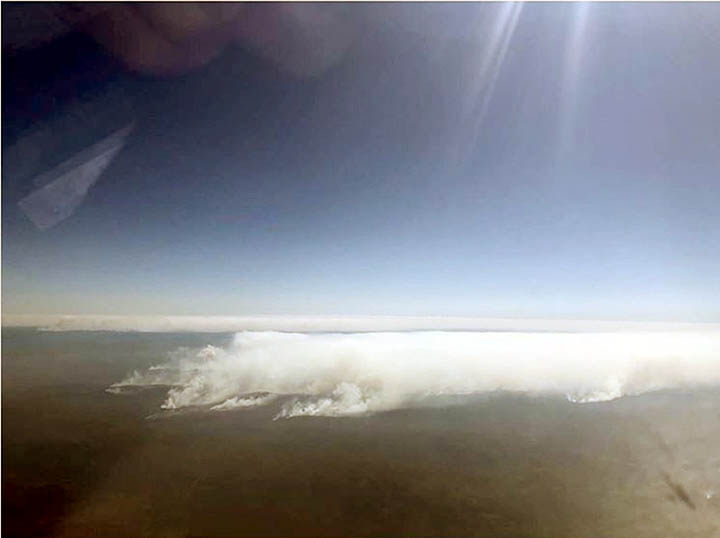 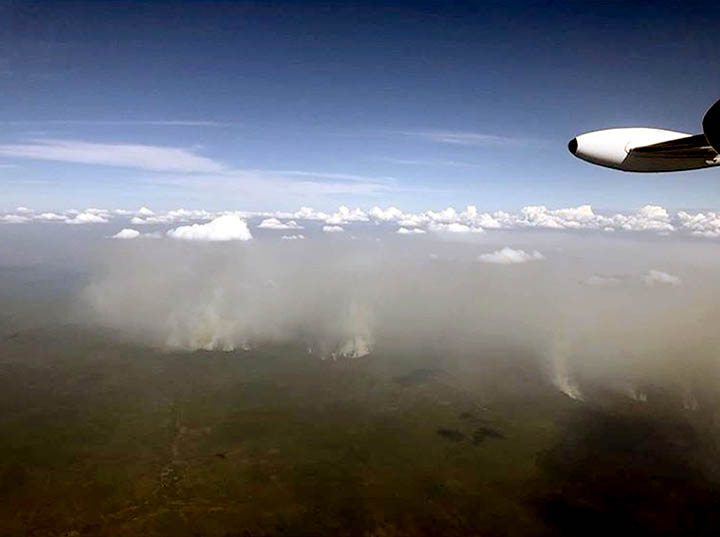 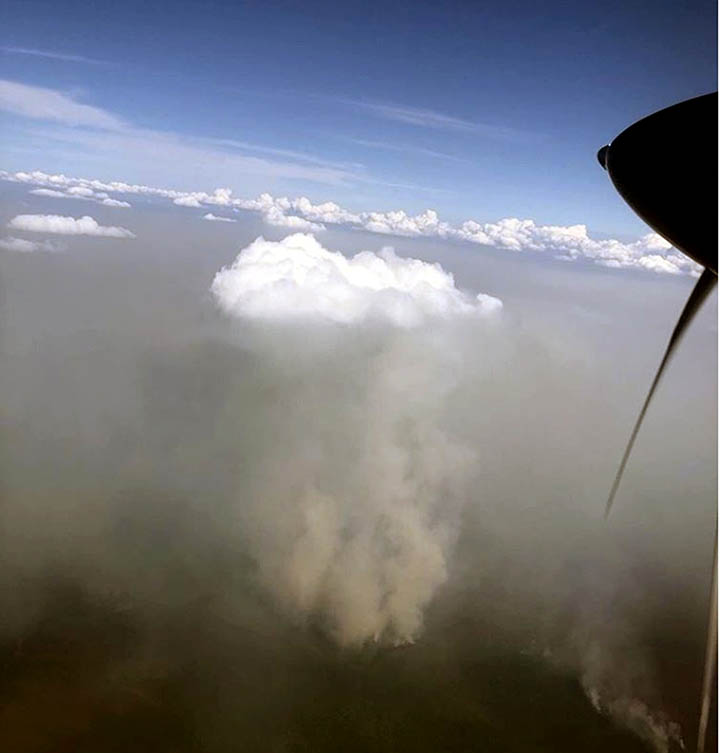 ‘The taiga is burning. This is Vanavara, Tura, (and) Boguchansky district.’

Presumably the smoke reaching the US is from more recent blazes, but the trail to North America highlights the problems of wildfires – some engulfing ancient boreal forests – in Siberia and the Russian Far East.

In dramatic aerial pictures from civil aviation pilot Vitalij Boykov over Vanavara and Tura as well as Boguchansky district in Krasnoyarsk region – currently one of the hotspots.

He posted: ‘The taiga is burning. This is Vanavara, Tura, (and) Boguchansky district. The wind carries all this towards the city, so don’t blame authorities or factories.

‘No rain is expected, so we’ll keep breathing this smoke in.’

His comments sparked  a backlash with one complaint that Russia was hosting ‘the most expensive World Cup in history’ but that fire fighting was not being undertaken due to lack of funds. 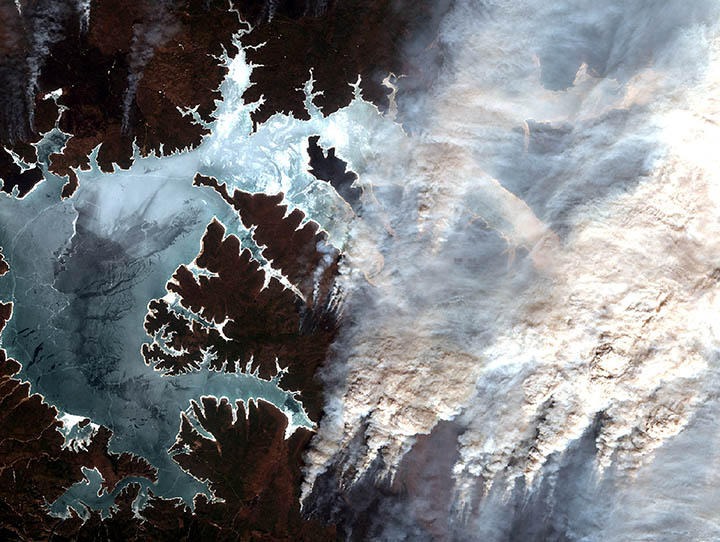 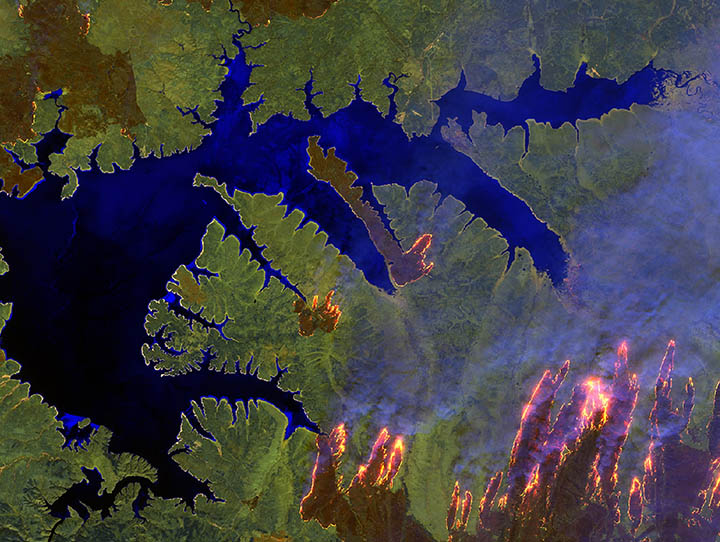 Latest reports show 27 fires across Krasnoyarsk region covering 8,682 hectares in. Areas potentially threatening settlements. Elsewhere in zones where the authorities are not obliged to fight flames because of no danger to people some 125 fires were burning covering 321,255 hectares.

Smoke from badly-hit Krasnoyarsk and Irkutsk regions is reported to be blowing into Buryatia republic, across Lake Baikal.

At least 16 fires are blazing further east in Magadan region, and 19 in Yakutia, also known as Sakha republic.

Here the Federal Forestry Agency is using An-26 planes with special agents to creating artificial rain in an attempt to put out fires in Yakutia. The same Soviet-era technology was traditionally used in Moscow to prevent rain falling in Red Square for major parades.

Viktor Yatsutsenko, head of the National Crisis Management Centre, admitted: ‘The forest fire situation is most difficult in Siberia and the Far East, in the Sakha region.

‘Aircraft, including Be-200 planes, are being used to extinguish the fires. Special attention is given to protection of the population and communities from fires.” he said.

Yatsutsenko reported complaints of smoke fumes in some areas but claimed the ‘environmental situation is normal’.

One report said that 65% of Russian summer wildfires are currently in Krasnoyarsk and Irkutsk regions.

Meanwhile, Alexey Yaroshenko of Greenpeace estimated the overall area covered by wildfires in Russia since beginning of 2018 as being more than ten million hectares. 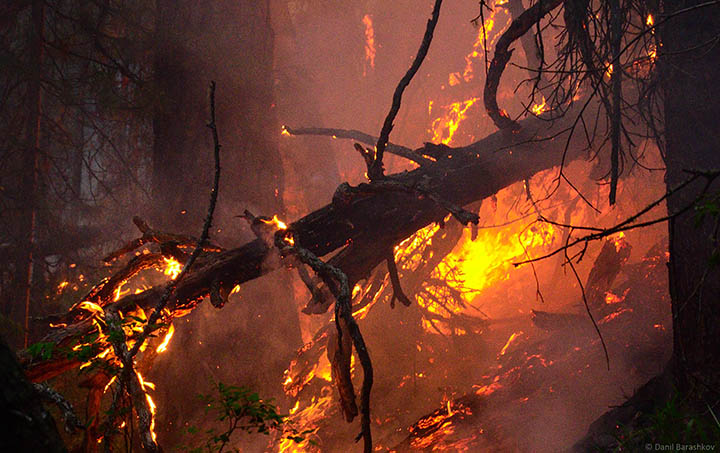 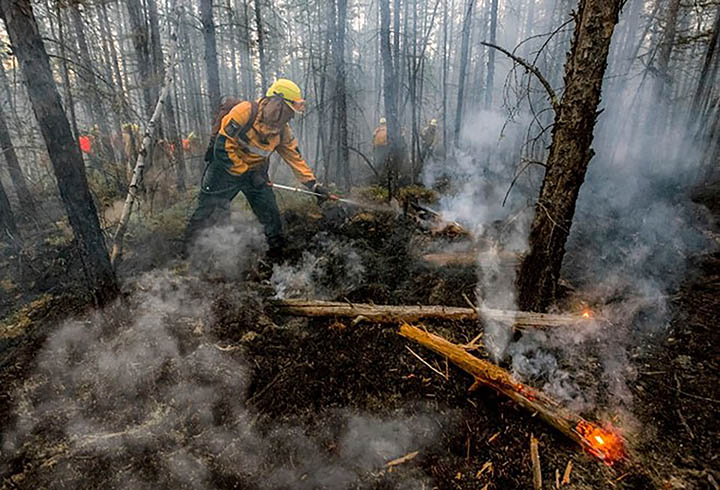 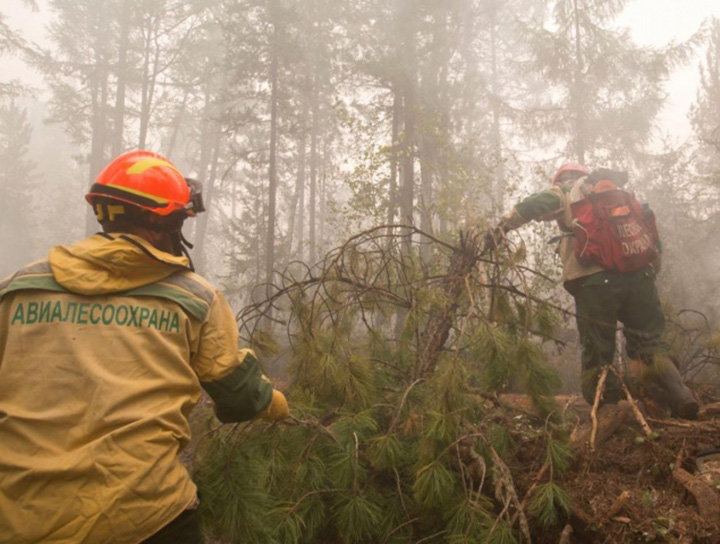 One report said that 65% of Russian summer wildfires are currently in Krasnoyarsk and Irkutsk regions.

He claimed that as of 8 July some 1 271 370 hectares were ablaze but of these only  61,879h are being extinguished – due to a shortage of money for firefighting.

The fires are causing bears to flee their natural habitat and come closer to people, according to recent reports.

This has been recorded in Yakutia, as well as Khabarovsk and Kamchatka.

‘We had to eliminate a bear that tried to attack our inspectors,’ said a source at Neryungri’s Committee for Nature Protection in Yakutia.

‘At first, we just wanted to scare him off, but then we had to shoot (the animal) given the direct threat posed to our employees’ lives.’ 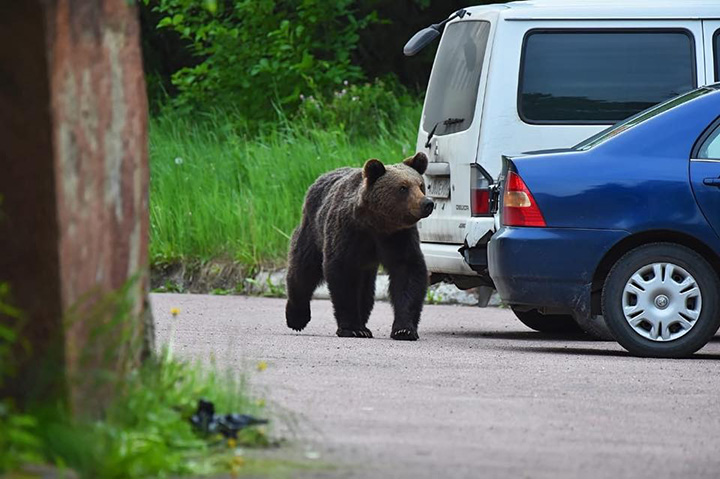 The regional hospital called for assistance after bears were seen prowling its territory.

‘They were knocking over trashcans, one animal laid down near the ambulance station and prevented the medical staff from doing their job,’ a source at the hospital said.

Since the start of the season, nine bears threatening the public have been killed in Kamchatka region.

Professor Yuri Danilov, from the Natural Sciences Institute of the North-Eastern Federal University, said: ‘There are forest fires in all regions of the Far East and Siberia.

‘In my opinion, the main reason for bears appearing in populated areas is linked to these forest fires.’

Be-200 plane extinguishes wildfires in Siberia.