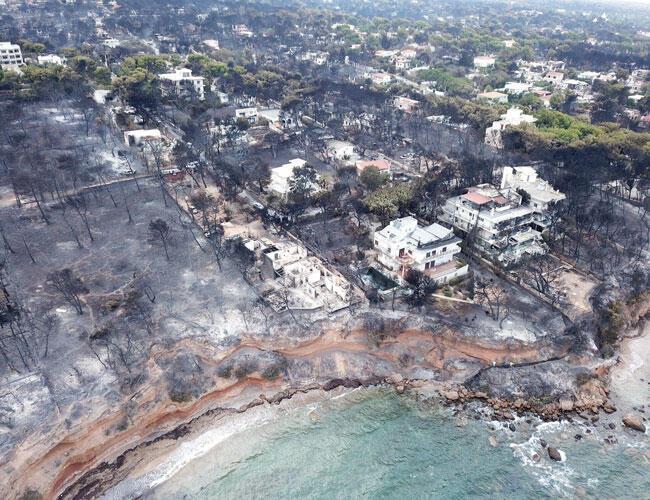 Grief and shock over Greece’s deadliest wildfires were clouded Friday by a bitter debate over who was to blame, as the opposition rejected the government’s suggestion that the blazes were started deliberately.

Deputy Citizen Protection Minister Nikos Toskas suggested on July 26 that there were “serious” signs that the worst of the fires, which killed scores this week east of Athens, was the result of arson.

Forensics experts pressed ahead Friday with the difficult task of identifying the bodies of the 82 people known to have perished in the catastrophe.

An official in the identification effort told Greek radio that most of the bodies were completely carbonized, meaning the task will likely take several more days to complete.

Amid public anger over the government’s handling of the aftermath, Toskas told reporters on Thursday that “a serious piece of information has led to us opening an investigation” into possible “criminal acts”

Officials citing information from satellite maps have said that 13 fires broke out at the same time across the region of Attica – which includes Athens – on July 23.

But the government has come in for strong criticism over its response to the disaster despite a 40-million-euro relief fund for those affected.

Defense Minister Panos Kammenos was heckled on Thursday as he visited the coastal region of Mati, where most of the fatalities occurred.

“You left us to God’s mercy, there’s nothing left,” shouted one resident.

But Kammenos went on the counter-attack, telling the BBC that illegal construction in the past was also to blame for the disaster.

The “majority” of houses on the coast had been built without the proper licences, he said.

“After this tragedy I think it is the moment to understand that it’s dangerous for them and for their families to not follow the rules and the laws,” the minister said.

Experts have said that a mix of poor urban planning, including a lack of proper access routes and the construction of too many buildings next to combustible forest areas, contributed to what were Europe’s worst wildfires this century.

The region’s mayor Evangelos Bournos told Greek radio Friday that the emergency responders had inadvertently trapped residents by closing a main road near the fires.

“We are all responsible, the government, the emergency services, and citizens,” he said.

The opposition New Democracy party reacted stingingly to Toskas’ claim that the fires were the result of criminal acts.

“This deplorable spectacle of rejecting any responsibility can only provoke anger,” it said in a statement.

The fires struck coastal villages popular with holidaymakers and burned with such ferocity that most people fled to the safety of the sea with just the clothes on their backs.

Survivors spoke of harrowing scenes including entire families burned alive in their homes.

“We were alone, there was nobody to help us. Everybody did what they thought they had to do to survive on their own,” resident Evi Kavoura told AFP.

The disaster unleashed a wave of solidarity and many survivors were being looked after by voluntary organizations, who were providing them with accommodation, clothing and food.

Amid mountains of food and baby nappies in a gymnasium in Rafina, near Mati, one of the volunteers, Joanna Kefalidou, an English teacher on holiday, said: “We’re Greeks and Greeks tend to come together in times of need and help each other as much as they can.”