“Remember the Maine, to hell with Spain” 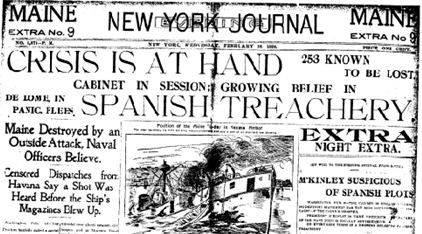 The island of Cuba was first claimed by Spain in 1492 when Christopher Columbus landed on the island. They remained a Spanish colony until the end of the Spanish-American War in 1898. For many years the Cuban natives attempted to free themselves from the rule of Spain and gain their  independence. The horrendous actions of the Spanish in the years leading up to this war and the yellow journalism tactics of American newspaper men like William Randolph Hearst and Joseph Pulitzer helped gain the sympathy of the American people towards the rebel cause. The U.S. government was also interested in controlling Cuba and the other Spanish owned Philippines, Guam, and Puerto Rico. 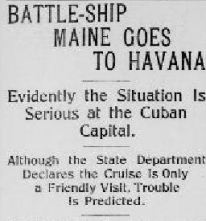 The USS Maine arrived in Havana Harbor on January 25th, 1898 to protect U.S. interests and civilians during pro Spanish rioting in Havana. This had a calming effect on the riots. Then on February 15th the forward hull of the Maine exploded in a devastating blast and was sunk. 266 of the 355 sailors on board were killed.

The papers of Hearst and Pulitzer wasted no time in casting the blame on the Spanish and sounded the alarm to go to war. The Navy, in another classic case of the government investigating itself, determined that a mine caused the blast despite the fact they had no real forensic evidence. They would not however place any blame on who was responsible for the mine. This didn’t matter though as the U.S. public’s mind was already made up. “Remember the Maine, to hell with Spain” was the cry. The USS Maine false flag was born.

The day following the blast Theodore Roosevelt wrote a letter to a friend and proclaimed, “Being a Jingo, as I am writing confidentially, I will say, to relieve my feelings, that I would give anything if President McKinley would order the fleet to Havana tomorrow. This Cuban business ought to stop. The Maine was sunk by an act of dirty treachery on the part of the Spaniards, I believe; though we shall never find out definitely, and officially it will go down as an accident.”

President McKinley went to Congress and got permission to place a blockade of Cuba on April 21st. Spain then declared war on the U.S. on April 23rd and immediately following the U.S. followed suit and declared war on Spain on April 25th. The war was over within three and a half months and ended August 12th with a U.S. victory. The Treaty of Paris (1898) had Spain forfeit control of Cuba, The Philippines, Puerto Rico, Guam, and parts of the West Indies.

Wreckage of the USS Maine

In 1911, the Department of the Navy floated the remains of the ship and conducted another investigation. They once again concluded that the blast was the result of a mine. Many investigators disagree and have a conflicting theory that there was spontaneous combustion of coal next to the magazine of ammunition in the forward hull. The evidence suggests that the blast blew outward from the hull and not inward as a mine would cause.

Regardless of whether a mine did the damage or not, Spain never claimed responsibility for the blast and the fact that Spanish officials and civilians from the ship City of Washington helped with the survivors speaks volumes as to whether Spain had any intentions of war towards the United States or not.