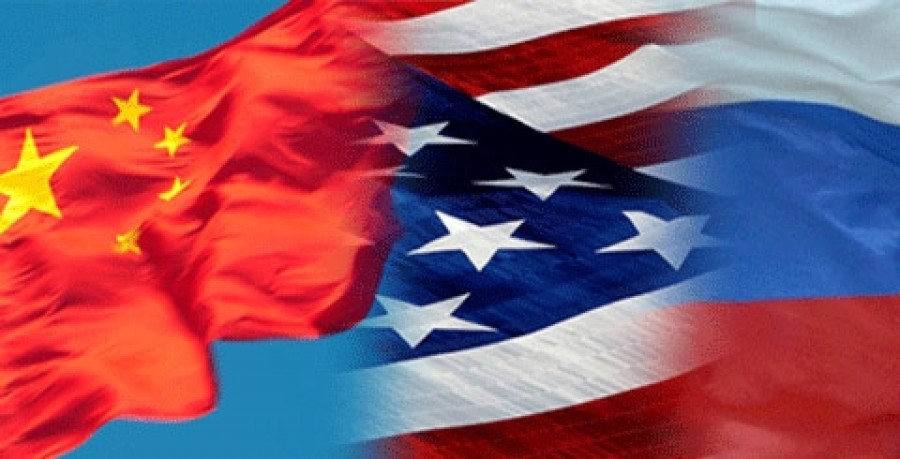 The orchestrated hostility toward Russia, China, Iran, and North Korea protects the $1,000 billion annual budget of the military/security complex by convincing the American public that the US is threatened by enemies. It also keeps alive Democratic Party hopes that Trump can be removed from office, and it has prevented President Trump from normalizing relations with Russia. I have emphasized for some time that Washington’s gratuitous and aggressive actions against Russia and the constant barrage of false accusations against Russia and its government have convinced Russia that Washington is planning a military attack. There is nothing more reckless and irresponsible than to convince a nuclear superpower that you are preparing an attack on them.

One would think that such irresponsible and reckless behavior would have the citizenry aroused and the media reporting the risk. Yet, there is only silence. It is more important to the media whether NFL players stand for the national anthem and that some male politicians show sexual interest in women in inappropriate ways. Insouciant America is walking into Armageddon.

A few days ago former US Secretary of Defense William J. Perry added his voice to mine and to those of the few who understand the danger. Perry said:

“When the Cold War ended, I believed that we no longer had to take that risk [nuclear annihilation] so I put all my energy into efforts to dismantle the deadly nuclear legacy of the Cold War. During my period as the Secretary of Defense in the 90s, I oversaw the dismantlement of 8,000 nuclear weapons evenly divided between the United States and the former Soviet Union. And I thought then that we were well on our way to putting behind us this deadly existential threat, But that was not to be. Today, inexplicably to me, we’re recreating the geopolitical hostility of the Cold War, and we’re rebuilding the nuclear dangers. … We are doing this without any serious public discussion or any real understanding of the consequences of these actions. We are sleepwalking into a new Cold War, and there’s very real danger that we will blunder into a nuclear war. If we are to prevent this catastrophe, the public must understand what is happening.” http://www.zerohedge.com/news/2017-12-03/former-us-defense-secretary-explains-why-nuclear-holocaust-now-likely

How can the American public understand when they do not know, because the few voices telling them are not reported. Indeed, the military/security complex, the Israel Lobby and the lobby’s American agents among the neoconservatives are actively working to discredit those who are aware of the dangerous situation.

The power of the military/security complex and the Israel Lobby, the two prime war-mongers of the 21st century, have immobilized the President of the United States. Trump is helpless in the face of a special prosecutor who is “investigating Russiagate,” a hoax created for the express purpose of preventing President Trump from restoring normal relations with a nuclear superpower.

Experts including William Binney, who developed the universal spy program for NSA thinking mistakenly that it would not be used against American citizens, have stated publicly that, if Russiagate were real and not an orchestrated hoax, the NSA would have all the evidence, making special prosecutor Robert Mueller’s “investigation” completely pointless.

One would think that even those who comprise the presstitute media would be able to figure out that NSA has the evidence if it exists. Instead, the presstitutes cooperate with Mueller in creating a fake news story, one that has been kept alive for over a year.

A country in which the media lack integrity cannot be a democracy as the people have no accurate information with which to make decisions and hold government accountable. The American presstitute media functions as a control arm for the powerful vested interests that are turning the United States into a police state that serves only a few hundredths of One Percent.

Americans have been lied to about everything. I agree that the lies go back a long way. To keep this column to a readable length, we can start with the many lies of the Clinton regime. The war on Serbia was done in order to humiliate Russia by proving that Russia was helpless in the face of American might to come to the aid of its ally, and it was done to establish the use of NATO as an arm of, and cover for, US military aggression.

Then we come to 9/11, the official explanation of which is rejected not only by Osama bin Laden but also by every expert unafraid to open his/her mouth.

Then we have the fake reason for the US invasion of Afghanistan, a disaster for America as it was for the Soviets. A handful of lightly armed Afghans defeated “the world’s only superpower,” just as they defeated the powerful Soviet army.

Then we have the fake charges of Saddam Hussain’s “weapons of mass destruction” hyped to the heavens by the corrupt American presstitutes. This amazing lie, disavowed by the UN weapons inspectors, was used despite the evidence to the contrary to invade Iraq and to destroy a country. This lie was later repudiated by US Secretary of State Colin Powell, who regretted the stain on his reputation caused by the George W. Bush/Dick Chaney regime’s misuse of his credibility before the UN.

Then we have the fake charges against Libya’s Gadaffi that were used to murder Gadaffi, to Hillary’s great delight, and to destroy the most successful country in Africa.

The ISIS mercenaries that Hillary and Obama used to destroy Libya were sent to destroy Syria when Russia and the British Parliament blocked Obama’s plan to send American troops to invade Syria. We have been subjected to years of lies from Washington and the presstitutes that Washington is fighting ISIS, when Washington sent ISIS to Syria to destroy Assad and the Syrian government.

And there is Somalia, another packet of Washington/pressitute lies. And the violation of Pakistan with the bombing of tribal areas falsely claimed to be al-Qaeda or Taliban supporters.

And there is Yemen devastated by Washington’s puppet Saudi Arabia.

And there are the false news reports of “Iranian nukes” and Iranian belligerent actions against Israel.

And “Russia invaded Ukraine” when in fact Washington overthrew with its financed NGOs the democratically elected Ukrainian government.

And now we hear that those who dare to tell the truth to Americans are “Russian agents” and “fake news purveyors.”

When a country’s government and media do nothing but lie 24/7, how can democracy exist. Clearly, it cannot.

If Trump has the power to turn national monuments over to corporate campaign donors, he most certainly can have his Attorney General open an investigation of Hillary Clinton or even indict her on the already known evidence. He can issue a pre-emptive pardon of General Flynn, who is being framed on charges that do not relate to Russian influence in the presidential election. Indeed, he can have the Attorney General investigate or arrest Mueller for sedition and an attempt to overthrow the government of the United States. These charges are far more realistic than the charge Mueller has brought against Flynn.

But what does President Trump do? He twitters, complaining that Gen. Flynns life is being destroyed while “Crooked Hillary Clinton” walks around free. http://www.lewrockwell.com/2017/12/no_author/crooked-hillary-walks-free/

Trump is correct, so why doesn’t he do something about it? What Flynn did was to ask the Russians not to over-react to the new sanctions that Obama placed on Russia in an effort to create such bad relations between the US and Russia that Trump woud be unable to normalize them. What Flynn did was entirely appropriate and has nothing to do with the hoax story of Russiagate. The real reason that the military/security complex is after Gen. Flynn is that he is the former director of the Defense Intelligence Agency and he said on a TV news show that the decision by the Obama regime to send ISIS to overthrow Syria was a “willful decision” that went against his recommendation.

In other words, Flynn let the cat out of the bag that ISIS was not an independently formed organization but a tool of US policy.

What Mueller is doing is so corrupt that he really should be arrested and rendentioned to Egypt.

Private interests and agendas have control over the US government.The people have no control. Washington works by selling legislation to the interest groups in exchange for campaign contributions. The private interests that provide the money that elects politiicans get the laws that they want. For example, President Trump is giving the environmental despoilers two protected national monuments, but he is powerless to protect himself and has advisors.

The ruling oligarchy is making an example of Trump in order to ensure that no future presidential candidate makes a direct appeal to the people. When Trump said that he was going to govern in the interest of the people by bringing the offshored jobs home, he attacked the profits of the global corporations, and when he said he was going to normalize relations with Russia, he attacked the power and profit of the military/security complex. He is now paying the price for his rashness.

The larger question is: what price will the American people and the rest of the world pay for the constraints the military/security complex has placed on Trump’s ability to normalize relations with Russia?