YEMEN: The ‘New Vietnam’ Could Bring an End to the US ‘Forever War’ Policy YEMEN: The ‘New Vietnam’ Could Bring an End to the US ‘Forever War’ Policy

House Leadership Pulls a Fast One for al Qaeda 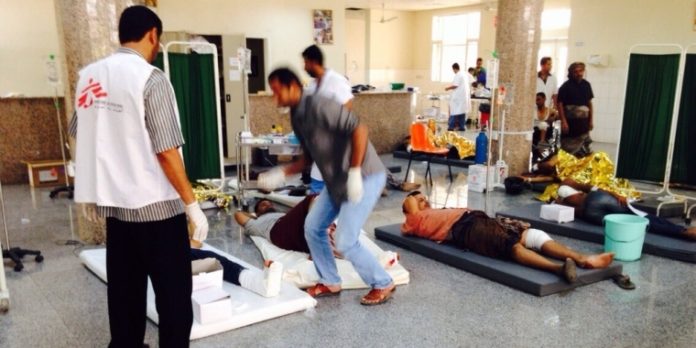 The sponsors of this resolution contend that such participation, which began in March 2015, was never authorized under the War Powers Act of 1973. Per the War Powers Act, any congressman can pose a legal challenge and is guaranteed a floor vote on the issue. This is known as a privileged resolution.

On November 1st, the night before the vote was scheduled to take place, House leadership swiftly pushed through a Rules Committee vote, denying the resolution’s privileged status. Thus, preventing the guaranteed floor vote.

What was their justification? Apparently, the House Rules Committee feels that the war in Yemen has yet to ‘rise to a level’ where the War Powers Act is applicable.

After preventing the vote on H.Con.Res.81, the House Leadership has said it shall permit a ‘compromise’ resolution on the war in Yemen. The debate, scheduled for the week of November 13th, will discuss the legality of U.S. involvement in the war. The vote will be non-binding.

“We remind the House leadership that under the War Powers Resolution of 1973,

“‘introduction of United States Armed Forces ’includes the assignment of member of such armed forces to command, coordinate, participate in the movement of, or accompany the regular or irregular military forces of any foreign country or government when such military forces are engaged…’

Therefore the War Powers Act, clearly applies to the war on Yemen.

The House leadership is lying to the American people, supporting the continuation of the world’s worst humanitarian crisis, violating the War Powers Act, and attempting to prevent Congress from stopping yet another illegal and unconstitutional war.

Conservatively, since the beginning of 2017, at least 10,000 people have been killed in this war. The heroic and indispensable Yemeni journalist Nasser Arrabyee has said the toll could be as high as 60,000 deaths.

The Saudis are ruthlessly bombarding the Yemenis and their civilian infrastructure. The coalition wants to cripple the people of Yemen to the point of submission. Their end goal is to force Yemen’s civilians to stop supporting the northern tribesmen if only to alleviate their suffering.

U.S. involvement is most critical to the Saudi effort in this war. The U.S. military is training Saudi Arabian forces. The U.S. is refueling the coalition’s warplanes not just in the air with tanker sorties, but also on its bases peppered throughout the region.

As of February, according to an article written by Oriana Pawlyk for Military.com:

“Saudi Arabian coalition jets bombing Houthi rebel sites in Yemen increasingly turn to U.S. Air Force tankers for refueling support almost two years after the conflict began. Since April 2015, the Air Force has logged 1,778 tanker sorties for the operation, Air Forces Central Command spokeswoman Capt. Kathleen Atanasoff told Military.com on Tuesday. That includes 1,069 over the past year, an increase of 360, or 50 percent, from the 709 in the previous period.‘These operations are ongoing, with aircraft refueling occurring daily,’ Atanasoff said in an email. The service’s tankers such as KC- 135 Stratotankers and KC-10 Extenders participated in 7,564 refueling ‘events’ with coalition aircraft, with ‘about 54 million pounds of fuel off-loaded in support of Saudi operations in Yemen,’ Atanasoff said.”

Donald Trump, doing his best Barack Obama impression, has been more than happy to sell the Saudis hundreds of billions of dollars worth of weapons to continue their genocide. These include planes, ships, rockets, precision-guided bombs, cluster bombs, etc. American defense contractors, particularly Lockheed Martin and Boeing, are likewise more than happy to rake in their handsome profits from Yemen’s destruction. With Jared Kushner playing the role of matchmaker for Mohammed bin Salman and Marillyn A. Hewson (CEO of Lockheed), the profits will surely escalate.

However, the Saudis have another powerful ally in this war, al Qaeda. This certainly makes the upcoming debate on Yemen a great opportunity for the House to finally get around to discussing the legality of high treason. Or more specifically, fighting another war for al Qaeda.

In addition to the coalition’s sadistic air campaign, Yemini civilians are threatened and attacked on the ground day in and day out by Sudanese mercenaries, al Qaeda in the Arabian Peninsula (AQAP), and a local Islamic State affiliate. All of whom support the coalition.

“U.S. intelligence and counter-terrorism officials have regarded AQAP as even more of a foreign terrorist threat to the United States than ISIS. It mounted efforts to bring down U.S. airlines three times between 2009 and 2012, and nearly succeeded twice.  But the Saudi/UAE war in Yemen has made them the most powerful indigenous armed group in southern Yemen, with more money, arms and territorial control than ever before. The Saudi-led coalition and the forces of the Saudi backed former regime have allied openly with AQAP and even fought alongside them. As a result of the war AQAP is now poised for the first time to compete for national power in Yemen.”

This is further evidence that U.S. involvement in the Saudi war is illegal. When asked for a justification for U.S. involvement in the Saudi/UAE war, both Barrack Obama and Donald Trump’s administrations have cited the 2001 Authorization for the Use of Military Force (AUMF). That AUMF permits military action only against those entities who perpetrated the attacks on 9/11. In other words, military action is only permitted against al Qaeda. Yet, this war is being fought on behalf of al Qaeda against their enemies, the Houthis.

Indeed, Asher Orkaby made the point in Foreign Affairs that, “far from being aligned with extremists, the Houthi movement has repeatedly clashed with the Islamic State and AQAP” So, in addition to the fact that this war was never authorized under the War Powers Act, it is also clearly not covered under the current AUMF.

Since the Obama administration, this is at least the third major conflict wherein the U.S. has found itself aligned with, fighting along side, arming, and/or supporting al Qaeda. This was official policy notably during the regime change operation in Libya and in the failed regime change operation in Syria. It is very important to note that if things had gone to plan in Syria, al Qaeda would have almost certainly taken Damascus.

Neoconservatives are now calling for a new AUMF to explicitly define ‘the enemy’ more broadly as proponents of so called, ‘radical Islam’. The ‘radical Islam’ handle is a red herring callously promoted by the fake news establishment. It is meant to dumb down and obscure the realities of these conflicts for domestic audiences. The cynical neoconservatives are pleased to have Americans view all Arabs and Muslims as one homogenous and terrifying collective. Most Americans are designedly oblivious to the differences between Sunnis, Shiites, and other branches of Islam. It is in the interests of the War Party for American voters to see such radically opposed groups as Daesh and Hezbollah as cut from the same cloth. This is obviously done in order to prevent rational discussion of these conflicts from ever taking place. For if the American people were well informed of the consequences of U.S. policy abroad, especially in the Middle East, they would probably not even passively support their regime’s policies.

In 2013, popular sentiment from people of all political stripes helped to prevent Obama’s would have been Iraq-style invasion of Syria. I believe one of the primary reasons for this was the effectiveness of the famous ‘I will not fight for al Qaeda in Syria’ social media campaign undertaken by active military personnel. Americans do not want to support and subsidize al Qaeda in Syria, Libya, Yemen, or anywhere else for that matter. The reason these horrific policies persist is not the peoples’ apathy, it’s their ignorance.

This is a particularly indefensible war, even by U.S standards. If they choose to, this is a war the American people can end. The establishment is certainly not comfortable publicly debating and defending their Yemen policy. Exposing the realities of this conflict and ending the war in Yemen could trigger an anti-war domino effect. Not since the Vietnam War has there been more fertile soil for an American anti-war movement.

Please continue to call your Congressmen and women and tell them to vote against the war on November 13th. Give them some good talking points for the debate. Please share, retweet posts from Yemenis on the ground, post news items, write blog posts, write articles, and speak your mind about the war in Yemen on social media. Do not be afraid to talk about the U.S.-Saudi/AQAP alliance. We have the truth on our side.