SANA, Yemen – After two and a half years of war, little is functioning in Yemen.

Repeated bombings have crippled bridges, hospitals and factories. Many doctors and civil servants have gone unpaid for more than a year. Malnutrition and poor sanitation have made the Middle Eastern country vulnerable to diseases that most of the world has confined to the history books.

In just three months, cholera has killed nearly 2,000 people and infected more than a half million, one of the world’s largest outbreaks in the past 50 years. “It’s a slow death,” said Yakoub al-Jayefi, a Yemeni soldier who has not collected a salary in eight months, and whose 6-year-old daughter, Shaima, was being treated for malnutrition at a clinic in the Yemeni capital, Sana.

Since the family’s savings ran out, they had lived mostly off milk and yogurt from neighbors. But that was not enough to keep his daughter healthy, and her skin went pale as she grew thin.

Like more than half of Yemenis, the family did not have immediate access to a working medical center, so Mr. Jayefi borrowed money from friends and relatives to take his daughter to the capital.

“We’re just waiting for doom or for a breakthrough from heaven,” he said.

How did a country in a region with such great wealth fall so far and so fast into crisis?

A Nation Split in Two 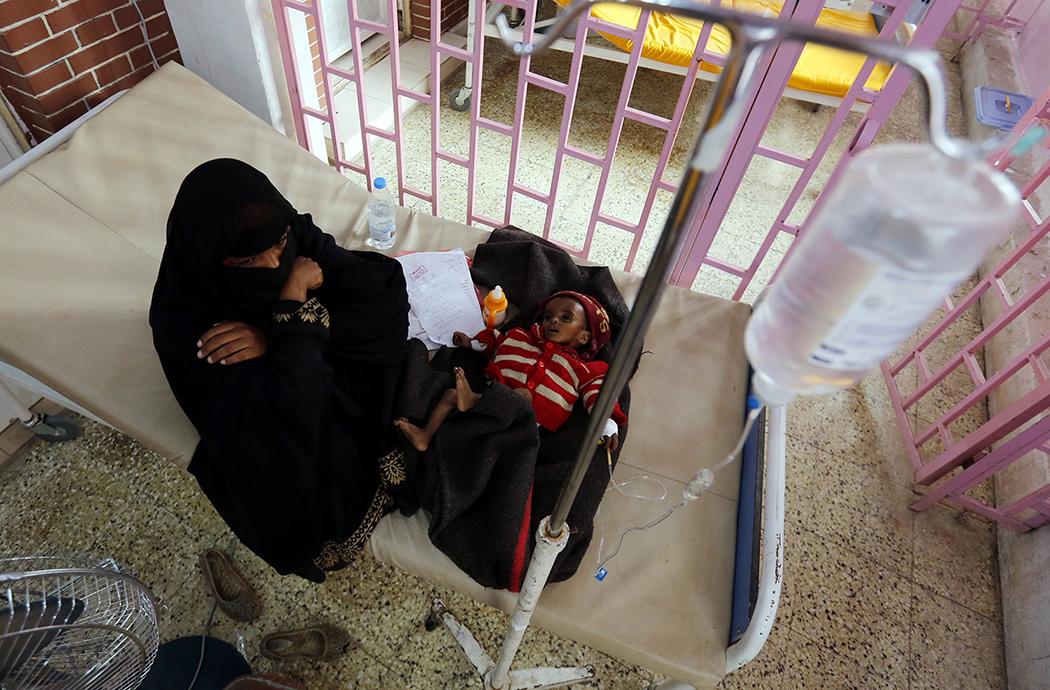 A woman with her cholera-infected child at a hospital in Sana. Yahya Arhab/European Pressphoto Agency

Yemen has long been the Arab world’s poorest country and suffered from frequent local armed conflicts. The most recent trouble started in 2014, when the Houthis, rebels from the north, allied with parts of the Yemeni military and stormed the capital, forcing the internationally recognized government into exile. In March 2015, Saudi Arabia and a coalition of Arab nations launched a military campaign aimed at pushing back the Houthis and restoring the government.

The campaign has so far failed to do so, and the country remains split between Houthi-controlled territory in the west and land controlled by the government and its Arab backers in the south and east.

Many coalition airstrikes have killed and wounded civilians, including strikes on Wednesday around the capital. The bombings have also heavily damaged Yemen’s infrastructure, including a crucial seaport and important bridges as well as hospitals, sewage facilities and civilian factories. 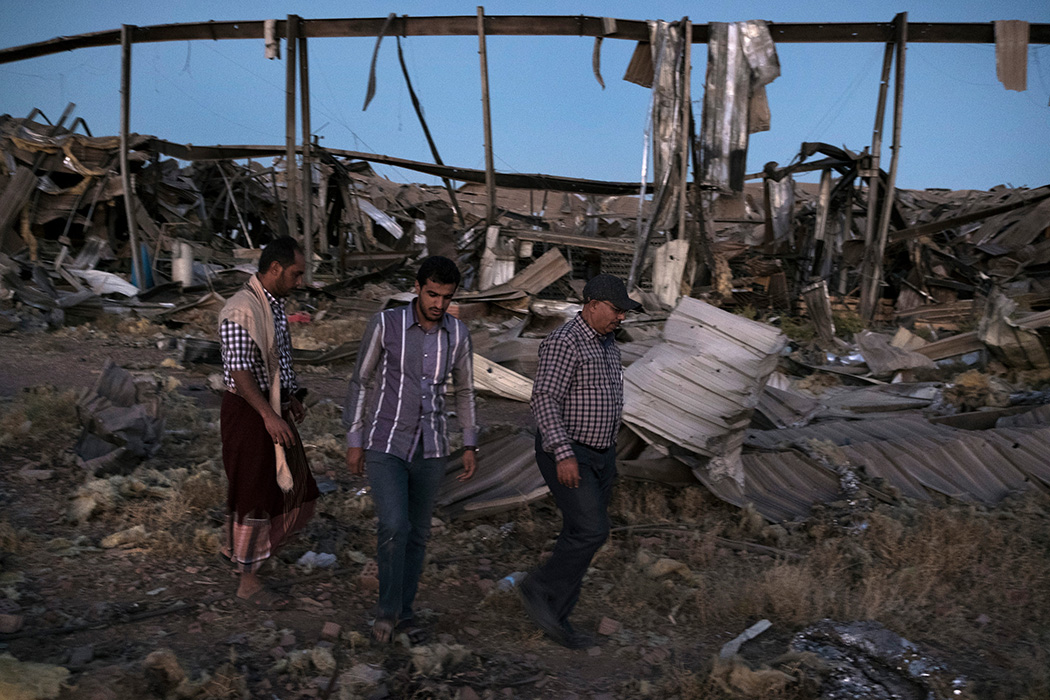 Services that Yemenis have depended on are gone, and the destruction has undermined the country’s already weak economy. It has also made it harder for humanitarian organizations to bring in and distribute aid.

The Saudi-led coalition has also kept Sana’s international airport closed to civilian air traffic for more than a year, meaning that merchants cannot fly goods in, and sick and wounded Yemenis cannot fly abroad for treatment. Many of them have died.

Neither of Yemen’s two competing administrations has paid regular salaries to many civil servants in over a year, impoverishing their families as there is little other work to be found. Among those affected are professionals whose work is essential to dealing with the crisis, like doctors, nurses and sewage system technicians, leading to the near collapse of their sectors.

The Devastation of Cholera

Damage from the war has turned Yemen into a fertile environment for cholera, a bacterial infection spread by water contaminated with feces. As garbage has piled up and sewage systems have failed, more Yemenis are relying on easily polluted wells for drinking water. Heavy rains since April accelerated the wells’ contamination. In developed countries, cholera is not life-threatening and can be easily treated, with antibiotics if severe. But in Yemen, rampant malnutrition has made many people, particularly children, especially vulnerable to the disease.

“With the malnutrition we have among children, if they get diarrhea, they are not going to get better,” said Meritxell Relano, the United Nations Children’s Fund representative in Yemen.

Outside a cholera clinic in Sana, Muhammad Nasir was waiting for news about his 6-month-old son, Waleed, who had the disease. A poor agricultural laborer, Mr. Nasir had borrowed money to take his son to the hospital but did not have enough to return home even if the baby recovered. “My situation is bad,” he said.

Five tents had been erected in the backyard of the cholera ward to cope with the sudden increase in patients. All day, families brought sick relatives. Most were elderly, or children carried on their parents’ backs. 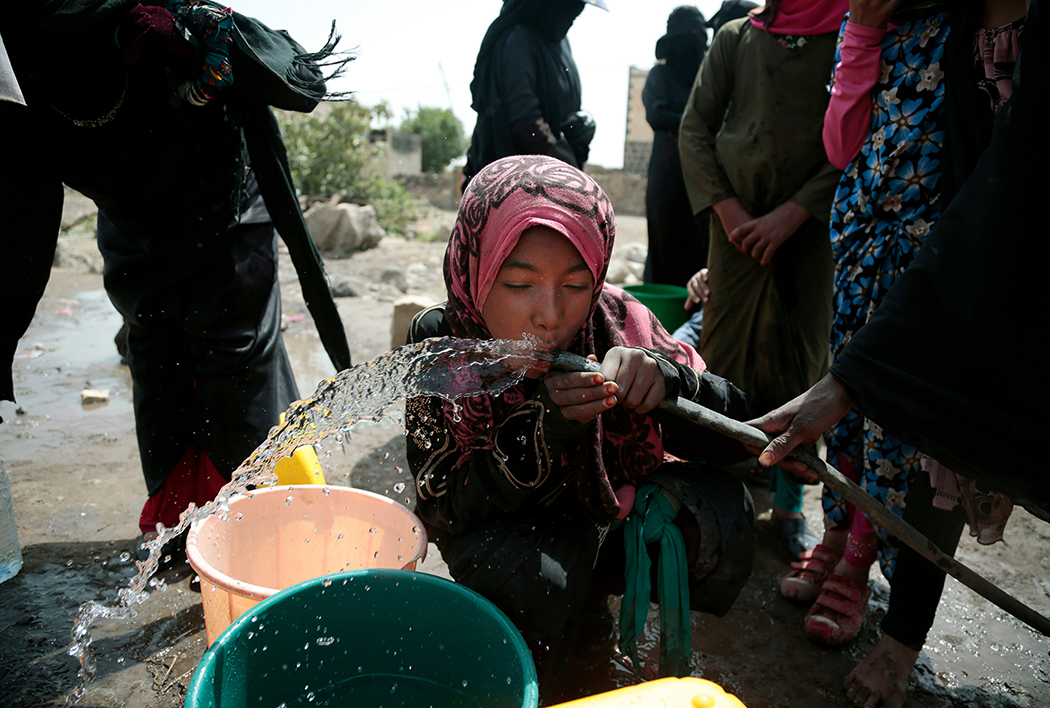 A girl drinking water from a well thought to be contaminated with cholera in Sana. Hani Mohammed/Associated Press

If infection numbers continue to rise, researchers fear that the cases could ultimately rival the largest outbreak, in Haiti, which infected at least 750,000 people after a devastating earthquake in 2010.

Aid organizations say they cannot replace the services that the government is supposed to provide. That means there is little chance for significant improvements unless the war ends.

“We are almost in the third year of the war and nothing is getting better,” said Ms. Relano of Unicef. “There are limits to what we can do in such a collapsed state.”

The United Nations has called the situation the world’s largest humanitarian crisis, with more than 10 million people who require immediate assistance. And the situation could become even worse.

Peter Salama, the executive director of the World Health Organization’s health emergencies program, warned that as the state fails, “the manifestation of that now is cholera, but there could be in the future other epidemics that Yemen could be at the center of.”

There appears to be no end in sight for the conflict. Peace talks brokered by the United Nations have stalled, and none of the warring parties have indicated much willingness to back down. The Houthis and their allies firmly control the capital, and Saudi leaders have said they will keep fighting until the other side gives in.

The United Nations says that Yemen needs $2.3 billion in humanitarian aid this year, but that only 41 percent of that amount has been received. The warring parties are among the greatest aid donors, with Saudi Arabia and the United Arab Emirates both giving significant sums. But critics note that the countries spend much more on the war effort and that their closing of Sana’s airport has been devastating for civilians. 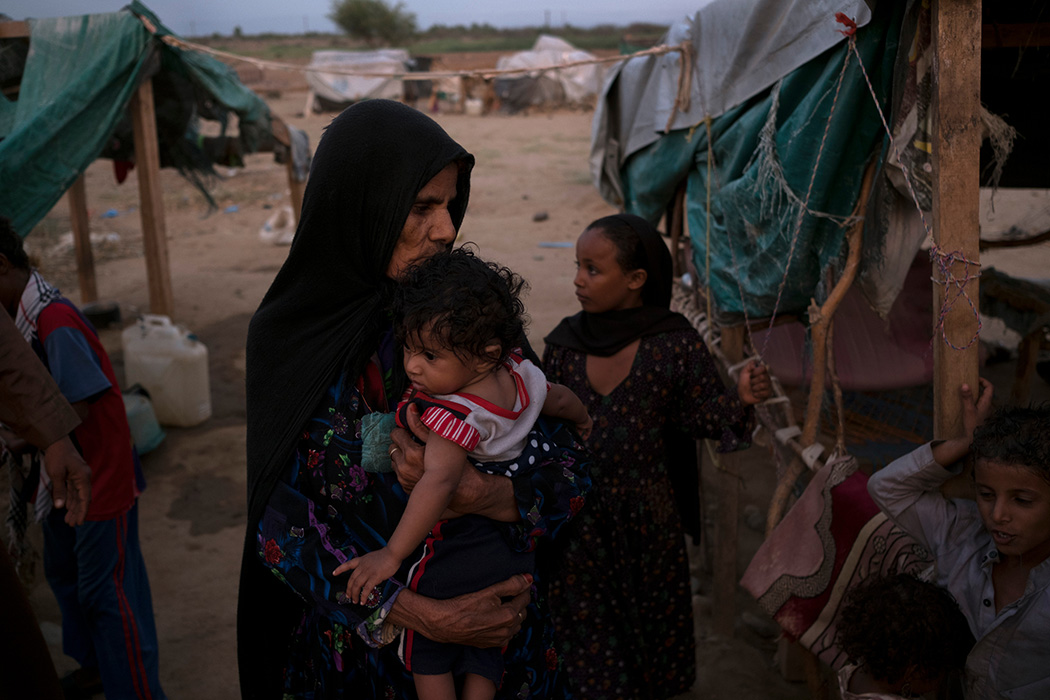 None of this bodes well for civilians.

“The war still haunts us from all directions,” said Saleh al-Khawlani, who fled his home in northern Yemen with his wife and six children after the Saudi-led coalition began its bombings. They then fled again, to Sana, after an airstrike hit the camp where they had sought shelter, and killed a number of his relatives.

They lived on the street for a while and had to beg for most of their food.

“Most of the time, we had only lunch and sometimes we don’t,” he said. “If we have lunch at noon, we don’t have dinner at night.”