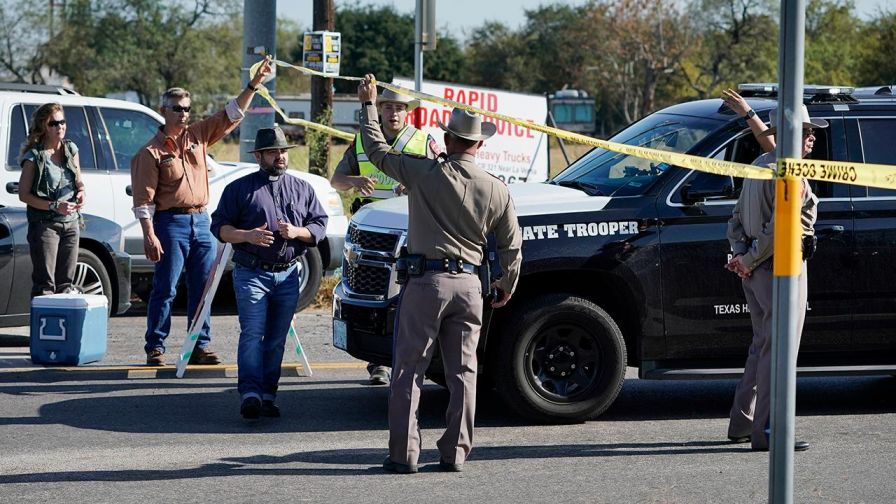 Another Brutal Massacre Carried Out In Texas Against Christian Patriots

It’s no surprise that such an event took place on this long anticipated weekend.  That this senseless slaughter occurred in Texas country is also not unexpected, unfortunately.  Our sincere condolences go to the great people of the Lone Star State, and especially to those families affected by this terrible tragedy. 28 dead after shooting at Sutherland Springs church

AntiFa and their terrorist co-conspirators have made it clear that the hot phase of the Purple Revolution would commence this weekend.

Actually, the hot phase of their seditious rebellion began with the Mandalay Massacre in Las Vegas on another Sunday on October 1.

Did the perps intentionally choose the Lord’s Day to perpetrate these horrific mass casualty events?

If so, this can only be the product of a totally godless movement that is typical of communist revolutions.  Russia was terrorized by the same tactics and strategy during the Bolshevik Revolution of 1917, exactly 100 years ago.

The globalists know that there is only one way to effectively take over any nation; and that is to terrorize the population with a steady stream of mass shootings, bombings, wildfires via arson, as well as other manmade disasters and fake natural catastrophes. For example:

This has always been their MO, and it’s unlikely to change at this late date.  Their methods have been tried and tested over millennia.  Generating maximum fear is the NWO cabal’s primary technique to scare a populace into total submission.

After all, when one is not even safe praying with their church congregation on Sunday, what is safe anymore?!

The globalists have already shot up and fire-bombed many other churches, both full of parishioners and empty.  They have shot up their fair share of malls and corporate offices, homes and apartment complexes, college campuses and elementary schools.

We are dealing with real demonic characters here who are way beyond criminally insane psychopaths.  They place no value on human life, except those that they deliberately take to advance their malevolent agenda.

After the Vegas massacre at the HARVEST, it’s clear that law enforcement, both local and national, is incapable of protecting the U.S. citizenry.  In the case of the FBI, it’s apparent that they will spend more time covering up mass shooting plots than exposing them.

Perhaps the following article explains why this was the case in Vegas, as it has been for numerous false flag operations over the years. 30 FBI Agents checked into Mandalay Bay Hotel 1-2 days before Vegas shooting?

The bottom line here is that something has to change — FAST — or else those responsible will simply continue this “Chinese water torture” on the American people.  There will then come a day when the citizenry will relinquish all their rights and liberties for the sake of protection … from the very government that commits these false flag black operations and psyops.  Be sure to read: “FALSE FLAGS” are LEGAL PROPAGANDA PRODUCED by the Department of Defense

As always, this mass shooting was also about taking away the guns.  The globalists are determined to vacate the Second Amendment.  And they will execute as many false flags as is necessary to accomplish that objective.

The New World Order agenda can only be fully implemented after Americans are stripped of their weapons.  The planned One World Government simply cannot be established until gun rights in the USA are revoked.

This is the greatest impediment for the NWO cabal, and they will continue to carry out MCIs (mass casualty incidents) until the American people are sufficiently softened up.  Therefore, it’s imperative that every patriot and gun advocate keep the pressure on their federal and state representatives to preserve the 2nd Amendment.

There is now a very stealthy movement afoot to surreptitiously ban guns, blue state by blue state.  When this phase of their insidious scheme is completed, they will then go after the red states.  They know that, after a certain number of shocking mass shootings, people everywhere will become numb and simply give up.

Special Note:
It’s common knowledge within intelligence circles and flag officer ranks that gung-ho enlisted men make the best candidates for the CIA’s MKUltra mind control program. The stealth programmers take these young, impressionable soldiers and easily transform them into brainwashed assassins.  Through an intense regimen of psychoactive drugs (which are secretly administered in the mandatory vaccination program), these unaware victims are then subjected to rigorous methods of mind control programming.  These unwitting recruits are told that they have just joined an elite group of special forces so that they will stay the course and graduate as a future assassin.  They are imprinted with specific informational, visual and auditory cues which, when properly triggered, will serve as marching orders to take out the pre-planned target.  Because these recruits are chosen based on their tours of duty in various theaters of war, they all have been medically diagnosed with PTSD (Post traumatic stress disorder).  In this way their triggered rampage stateside can be explained away as just another ex-military guy who snapped.  And they never know who their true masters were that covertly controlled their calculated destiny of death and destruction.

The incidence of mass casualty events is quickly increasing.  There is every indication that this is the form that the CIA-directed color revolution (read: civil war) will take.  The leadership of the Left is comprised of cold-blooded cowards and would never expose themselves unnecessarly.  They always look to others to do their dirty work.

George Soros, Barack Obama, Hillary Clinton, Bill Clinton, John Podesta, Nancy Pelosi, Maxine Waters, Chuck Schumer, Adam Schiff, Eric Holder, Loretta Lynch, et al. are just a few of the co-conspirators who are determined to overthrow the Trump Administration. These traitors will utilize every terrorist method to achieve their goal, just as they will employ any terrorist who is mercenary enough to kill for the ongoing Purple Revolution.  BEWARE: The Purple Revolution Comes To America

Because of the degree of involvement of Deep State on the American battlefield,  it’s really critical that each and every patriot stay vigilant.  Any sign of trouble needs to be spread across cyber-space as soon as it appears.  Local communities need to bond as never before, particularly in the small towns and rural areas like Sutherland Springs, Texas.

The nation is truly at an historic juncture.  The forces at work are so powerful and so many that only the Highest Power can see US through this tunnel of darkness.  Hence, if ever there was a time to put one’s hands together and pray — fervently — this is it.