Trump’s Foreign Policy Proves To Be An Unmitigated Disaster 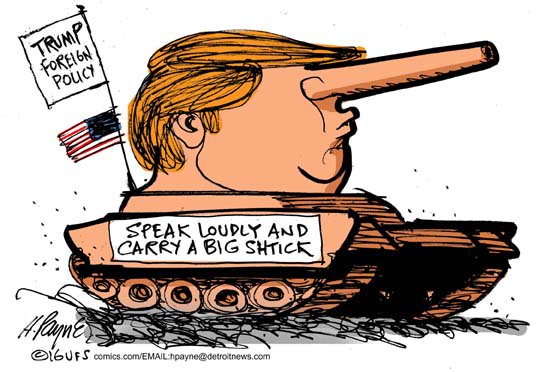 Trump’s Foreign Policy Proves To Be An Unmitigated Disaster

The eclipse of U.S. influence on the world stage has seen several world leaders begin to push the envelope against Washington either by directly confronting the United States or by reneging on international treaties and agreements. Trump, who has made scrapping international treaties like the Paris Climate Accord and the Joint Comprehensive Plan of Action (JCPOA) his signature international achievements, has set a bad example for other leaders to pull out of agreements and pacts.

Perhaps no leader has taken advantage of American foreign policy and military turmoil more than Erdogan. Last year, Erdogan’s dictatorial government arrested American Protestant pastor Andrew Brunson on charges that he was involved in the so-called “Fethullah Terrorist Organization” coup attempt against Erdogan in 2016. Erdogan attempted to swap Brunson for Gulen, a billionaire businessman and cleric now living under official political asylum in Pennsylvania. Erdogan’s request was not acted upon, so, as is the case with dictators, he grabbed another hostage, U.S. Consulate-General in Istanbul Turkish employee Metin Topuz.

After Topuz was charged with being a spy for Gulen, the Turkish government arrested a second Turkish employee of the consulate, along with his wife and child. The U.S. retaliated by suspending the processing of all non-immigrant visas for Turks to enter the United States. Erdogan ordered the Turkish visa offices in the United States to do the same with U.S. visa applications for Turkey. Erdogan has reportedly ordered the arrest of a half-dozen Turkish-American citizens on similar trumped up charges of aiding in the 2016 coup and of being connected to Gulen’s organization.

In Egypt, President Abdel Fattah al-Sisi is clamping down on the Coptic Orthodox Church while carrying out pogroms against gays and transgender people. Sisi is obviously encouraged by Trump’s “neo-Puritan” policies.

The Kim Jong-un government in North Korea has engaged in a war of words with Trump after the U.S. president resorted to calling the North Korean leader “rocket man” in tweets and before the United Nations General Assembly. That resulted in North Korea referring to Trump as a “dotard,” an arcane English word meaning a feeble and senile old man. North Korea, viewing Trump’s attacks on the JCPOA nuclear weapons agreement with Iran, has no desire to reach a nuclear deal with anyone after witnessing that anything the United States signs is not worth the paper it’s printed on. It is also noteworthy that North Korea signed the Paris Climate Accord, an agreement Trump has renounced.

Similar breakdowns of international law are popping up all over the world with Washington’s preoccupation with a president considered even by his closest military and national security aides to be too mentally unbalanced to be trusted with the nuclear launch codes. Ukraine, which has been encouraged by promises from some parties in the Trump administration of receiving U.S. lethal weaponry, has walked away from the Normandy Quartet and Minsk Agreements between Russia, Ukraine, France, and Germany on cessation of hostilities in eastern Ukraine. After witnessing Trump turn international agreements into toilet paper, Ukraine’s president, Petro Poroshenko, who presides over a kleptocracy that includes rich Ukrainians linked to the Trump and Kushner criminal organizations, sees no reason to abide by agreements with Russia worked out through the good offices of France, Germany, and Belarus.

Even though the European Court of Justice ruled last year that Morocco could not claim the disputed territory of Western Sahara, which is recognized as an independent state by 40 nations, Morocco is now reneging on an agreement to hold a referendum in Western Sahara on independence. With Trump referring to the UN as an exercise in mismanagement, Morocco’s King Mohammed feels emboldened to ignore UN resolutions on Western Sahara.

Taking a page from King Mohammed, Papua New Guinea’s scandal-plagued prime minister, Peter O’Neill, is reneging on carrying out an independence referendum—guaranteed by the Bougainville Peace Accord of 2001—prior to 2020. The referendum, if passed, would require Papua New Guinea to grant independence to Bougainville. French President Emmanuel Macron has also shown signs of wanting to violate the 1998 Noumea Accord, which requires a referendum of independence for New Caledonia to be held in the territory prior to November 2018. France appears inclined to see more French mainland citizens move to New Caledonia in advance of the poll to ensure a “no” vote in the referendum, thus defeating the native Kanaks from achieving their goal of an independent homeland.

Saudi Arabia, with Trump’s encouragement, led an economic and transportation boycott of Qatar, which violates several international agreements, including the UN Charter. The Saudis even contemplated shooting down a Qatar Airways passenger jumbo jet, claiming it violated Saudi airspace. The United Arab Emirates apparently triggered the Qatar crisis by hacking the Qatar News Agency and inserting a story that quoted Qatar’s emir of being critical of the Saudi king. It was later revealed that Israel was involved in the hacking through one of its lobbying organizations in Washington, the Foundation for the Defense of Democracies. The Saudis also pressured tiny Djibouti, in the Horn of Africa, to expel 500 Qatari peacekeeping troops monitoring the Djibouti-Eritrean border. The Saudis have ignored a recent UN report on its genocide committed against children in Yemen.

The scrapping of international agreements around the world has followed America’s preoccupation with an unstable president and his disdain for international accords. Israeli Prime Minister and Trump friend Binyamin Netanyahu has taken advantage of a powerless State Department to annex more occupied lands in the West Bank in violation of multiple UN Security Council resolutions. It is noteworthy that Netanyahu’s friendship with the Trump family goes back to the 1980s, when then-Ambassador to the UN Netanyahu counted Fred Trump, Donald Trump’s father, as one of his closest friends. Netanyahu is also a close friend of Trump son-in-law and special adviser Jared Kushner and his father, Charles Kushner.

Norway, perhaps emboldened by the anti-Russia saber rattling of its former prime minister-turned-NATO secretary-general Jens Stoltenberg, is violating the terms of the 1920 Svalbard Agreement. The agreement guarantees free international access to the Arctic archipelago of Svalbard. Norway has started to illegally impose Norwegian visa regulations for the islands, which, for the most part, is designed to keep out Russian nationals.

The minute Trump was sworn in as president, new and long-dormant flashpoints began lighting up around the world, from the Rock of Gibraltar and Africa’s Caprivi Strip to the Sikkim-Tibet border and the island of Socotra. As Trump descends into further madness, many of these flashpoints will ignite into conflict. The Trump era will be known in future history books as the time when America’s lack of leadership and international engagement plunged the world into violence-ridden nihilism.