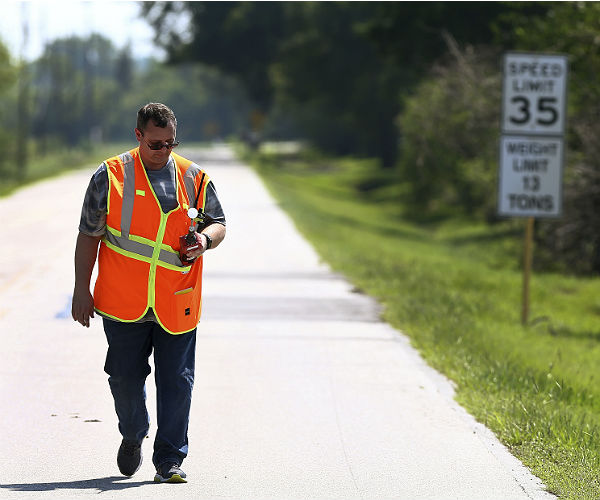 Mike Cosseyhealth, a safety consultant with Bureau Veritas, tests the air quality inside the 1.5-mile perimeter evacuation zone from the Akerma chemical plant, where organic peroxide exploded early Thursday, Aug. 31, 2017, after cooling systems were compromised by flooding water inside the plant, in Crosby, Texas. (Godofredo A. Vasquez /Houston Chronicle via AP)

Explosions that rocked a Texas chemical plant after it was inundated by Harvey’s floodwaters are raising questions about the adequacy of industry preparations for the monster storm and stoking fears of more accidents in the days ahead.

The owners of the plant in Crosby, Texas, warned Thursday that further explosions could come as the unstable chemicals there warm up and degrade following a loss of power at the site northeast of Houston.

Meanwhile, the scope of the damage from Harvey continues to expand as companies report spills and toxic pollution releases linked to toppled fuel storage tanks, shutdown refineries and at least one broken pipeline used to transport hazardous materials.

“The event is still unfolding. But it’s clear that what actions and precautions were taken and were in place have proved inadequate,” said Bill Hoyle, a former senior investigator for the U.S. Chemical Safety Board. “When Crosby is resolved, there are many more dominoes to fall in the region.”

The six counties in the Houston area are home to some 230 chemical plants, 33 oil refineries, and hundreds of miles of pipelines transporting hazardous materials, according to information from the Texas Commission on Environmental Quality and Sierra Club. That infrastructure stretches east into Louisiana, where the storm traveled after leaving Texas and where damage is just beginning to be assessed.

U.S. Environmental Protection Agency officials said they were working with the state to contact plant operators to determine their status. Andrea Morrow, a spokeswoman for the Texas Commission on Environmental Quality, said the agency had received “no other reports of concern” from other chemical plants in the state.

Harvey is only the latest severe weather event to pound the U.S. Gulf Coast, and oil and chemical companies operating there had touted changes made to improve safety in the wake of other devastating storms, most notably Hurricane Katrina in 2005.

Those included elevating electrical systems to prevent power losses that can cause equipment to fail, spurring uncontrolled releases of pollutants, and making facilities more resistant to damage from high water or wind.

“Our industry has applied lessons from previous hurricanes and developed new technology, best practices and safety standards to help companies secure infrastructure, assess any damage, and work to minimize disruptions to supply,” said Michael Tadeo, a spokesman for the American Petroleum Institute.

Tadeo said the group was unable to quantify or put a dollar value on facility upgrades that were intended to better protect against storms.

Reports submitted to Texas regulators and analyzed by The Associated Press reveal more than two dozen air pollution releases from refineries and chemical plants in the 11-day period leading up to Harvey and its immediate aftermath. That includes both intentional releases as plants scrambled to shut down their operations as the storm approached and accidental emissions caused when fuel storage tanks were compromised or other equipment malfunctioned as Harvey rolled ashore.

As the storm approached, the American Chemistry Council issued a statement saying the industry was prepared for Harvey: “Chemical companies know well to avoid the dangers of being unprepared for any threat,” the council said.

Experts say such efforts remain largely voluntary because federal regulations governing plant safety have not been updated since 1992. The rules were adopted in response to an infamous chemical accident in Bhopal, India, where a gas leak at a Union Carbide pesticide plant exposed a densely populated area to poisonous gas that killed thousands of people.

Proposed updates to the federal regulations have languished for more than two decades, said Michael Wilson, director of occupational health for the BlueGreen Alliance and a former chief scientist for the California Department of Industrial Relations.

The effort gained renewed momentum after a 2013 explosion at a fertilizer plant in West, Texas, killed 15 people, most of them firefighters and other first responders. However, stricter rules issued by the Obama administration in its final days were put on hold for two years once President Donald Trump took office.

Wilson said a gap in the existing rules means companies are not required to use the most advanced technologies to prevent accidents.

The old rules also provide limited guidance on how companies should handle so-called reactive chemicals such as those at the Arkema plant in Crosby that apparently caused Thursday’s explosions and fire, said Hoyle, the former safety investigator.

“In some cases facilities have volunteered to make chemical safety improvements. But the problem with that approach is not everyone volunteers,” he said.

Arkema warned earlier this week that the chemicals would erupt in an intense fire resembling a gasoline blaze. There was “no way to prevent” the explosion, CEO Rich Rowe said on Wednesday.

The Chemical Safety Board has sought to close the loophole for reactive chemicals since 2002, when it issued a study that detailed 167 accidents involving the chemicals that had resulted in 108 deaths over two decades.

The board’s chair, Vanessa Allen Sutherland, told reporters Thursday that the board would be investigating the Crosby accident with an eye toward plugging any regulatory loopholes that could impede safety. She also warned that such events could become more commonplace as the frequency of severe weather events increases, which scientists say could occur due to climate change.

“The type of weather events we are seeing in the Gulf could be a harbinger of things to come,” Sutherland said.